The recent announcement of President Trump to withdraw American troops from Syria has not only further complicated the situation for the international actors involved in the crisis but also enabled speculations about the future of the Turkish-American confrontation in Syria. 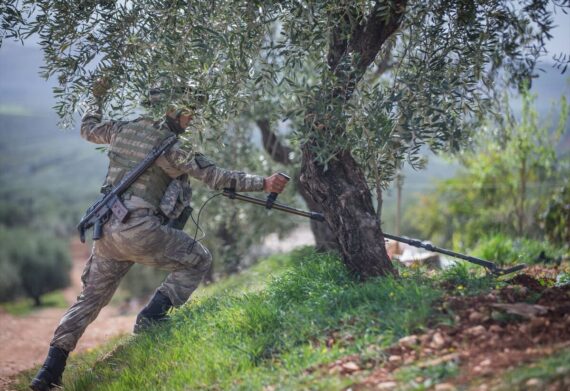 Over the past years, the U.S. military involvement in the Syrian crisis has become a widely discussed topic across the globe. The recent announcement of President Trump to withdraw American troops from Syria has not only further complicated the situation for the international actors involved in the crisis but also enabled speculations about the future of the Turkish-American confrontation in Syria. In fact, such a decision can bear either dire consequences, or yield positive outcomes for Turkey. It is important to investigate the implications of Trump’s unsettled withdrawal decision for Turkey, and evaluate this new development in relation to the Ankara-Washington disagreement over the issue of American support for the YPG. Unfortunately, it is still unclear whether Trump’s unexpected decision will facilitate Ankara’s strategy in Northern Syria or not.

Despite the fact that Ankara has not made an explicit announcement on this issue, Turkey is likely to appreciate the American act of pulling out of Syria, if the timing and methodology simultaneously correspond with Turkey’s strategy against the PKK in the country. If so, one might question what the Turkish strategy towards the PKK-YPG in Syria is. Turkey’s strategy is first and foremost to minimize the territorial control of the PKK-YPG in the country and restore U.S.-Turkey relations. The acceptable end scenario for Ankara is to create a new “territorial space,” in which the PKK-YPG cannot obtain any sort of military force that can politically or militarily influence the northeastern part of the country. This ‘space’ can only be achieved if the U.S. stops backing the PKK-YPG. Otherwise, the Turkish-American relations may enter an irreversible direction since Turkey seems to be willing to carry out its military action against PKK’s region under U.S. protection. At this stage, the latter is not what Turkey wants to do in the near feature. In that case, the recent statement of President Trump to withdraw American troops from Syria is a crucial move that can influence Turkey’s short-term game plan in Northern Syria. There are two important but interrelated scenarios about Trump’s post-American Syrian strategy that can destabilize Turkey’s strategic concerns and more importantly create more chaos in Northern Syria. The irony here is that Trump himself is faithfully echoing Obama’s hands-off policy in Syria which is the main driving factor behind Turkish-American confrontation.

The first scenario is about timing. The preference to downgrade U.S. involvement in Syria in the fight against Daesh is problematic if the Trump administration really wants to restrain Iranian influence over Syria. The strategy of disengagement makes sense only if it is applied at the right time. The Obama administration made a similar mistake in Iraq in 2011, with a post-American Iraq easily slipping into Iran’s hands. The power vacuum that emerged after the U.S. retrenchment from Iraq was one of the driving factors behind the rise of Daesh. The timing of the U.S. withdrawal might also provide more space for the Assad regime to gain leverage, which is not an intention of the original U.S. strategy in Syria. It is needless to say that Russia will become a more significant actor in a post-American Syria. Overall, it is expected that an uncontrolled and untimely American withdrawal from Syria may bring extra costs for Turkey in Syria.

The second scenario relates to methodology. A critical assessment of such a striking development is essential for Turkey in assuring long-term military leverage against the PKK threat in the region. In this regard, the methodology that the U.S. pursues in pulling out its ground troops is really a matter of Turkey’s policy towards a post-American Syria. But, nobody thinks that the U.S. will completely remove itself from Syria, even Trump himself. Thus, many questions still remain regarding the direction of American military presence in the country.

If the U.S. maintains its military presence to protect the current structure of the SDF as it is now, for which the PKK-YPG is the primary military component, then Turkey’s ‘military deterrence’ oriented strategy vis-a-vis the PKK presence in Syria will remain. The main strategy for Turkey is only acceptable in the condition of the demobilization of the PKK. The latest attempt of the U.S. to transform the Syrian Democratic Forces into a political party to be named as Syria’s Future Party does not bring any solution to Turkey’s concerns for the future of Syria. Ankara sees the new party as an extension of the U.S. strategy to attribute another label to the PKK. Ankara, in fact, perceives this move as an attempt to cover up the PKK’s terrorist motivations. Turkey believes that a comprehensive strategy should consist of a broad communal consent, in which the PKK-centric political project cannot be sustainable.

The strategic value of the U.S. disengagement from Syria for Turkey is not apparent since Ankara did not expect that the U.S. would change its overall strategy. Ankara still thinks that Trump’s act is not realistic and applicable in the near future. It is also interesting to witness that President Trump’s military withdrawal incentive irrationally contradicts the claims put forth by CENTCOM in favor of furthering American military presence in Syria, especially in Manbij where Ankara and Washington are most likely to confront against each other in the near future.