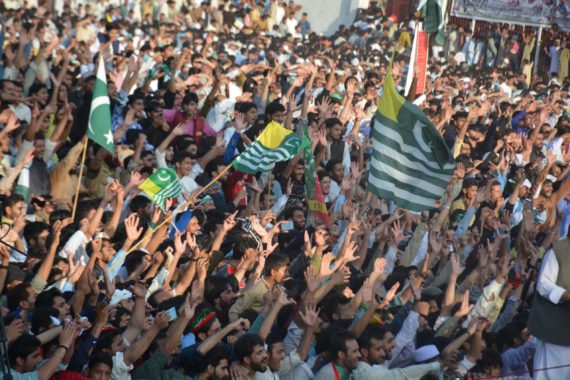 A view of people attending a massive public gathering to be addressed by Pakistani Prime Minister Imran Khan in Muzaffarabad, the capital of Pakistan-administered Kashmir, on September 13, 2019, to highlight the Kashmir issue to the world community. AA

On August 5, 2019, the Indian Government revoked Indian-administered Kashmir’s special constitutional status. The special status granted Kashmir the right to have its own constitution, a separate flag and the autonomy to make laws on all matters, except defense, communications and foreign affairs.

The status was granted under Article 370 of India’s Constitution and dates to 1927, it forbade Indians outside Kashmir from permanently settling in the region, buying lands, securing educational scholarships and holding local government jobs.

This decision to revoke the status came after the government cancelled a Hindu pilgrimage and asked tourists to leave the disputed region. Ten thousand additional troops were sent into the region to reinforce the 500,000 already based in the Muslim-majority region, imposing a curfew on parts of the territory, arresting key political leaders and shutting down telecommunications. The government also decided to split the state into two union territories, Jammu and Kashmir that will have a legislature and Ladakh that will be ruled directly by the New Delhi government without its own legislature.

The enforced communication blackout and restrictions in Indian administered Kashmir continued until Indian Independence day on 16 August when the blackout was eased and some of the restrictions were lifted by the Indian authorities in some parts of the region. Main government offices and schools were shut down in Indian-administered Kashmir until some of them were reopened on 19 August.

The Indian Prime Minister Modi and his government emphasized that scrapping the special status would be useful for the future of the region claiming that it will strengthen the economic situation, increase the number of tourists in addition to easing rules for acquisition and ownership of land by non-local Indians to set up businesses.

As a response to New Delhi’s move, Pakistan downgraded its diplomatic relations with India, expelled India’s envoy to Pakistan, suspended trade with India and asked the UNSC to hold an emergency session to address India’s “illegal actions”. Pakistani Prime Minister Imran Khan during a visit to the disputed region, reaffirmed his support for the Kashmiri people, criticized Indian’s Modi for committing a ‘strategic blunder’. Pakistan’s secretary of state accused New Delhi’s government of ‘having a fascist mentality’.

However, the number of arrests of high profile figures and activists, including three former chief ministers, has been increased with at least 4,000 people detained according to AFP News Agency. This massive wave of detentions came after the Supreme Court gave the government a seven day period to respond to a legal challenge calling for an end to the communications blackout. The court also noted that many petitions which challenge the abrogation of Kashmir’s special status would come in October. In addition to this, rights activists in the territory say at least 8,000 people have disappeared after being arrested by security forces in Indian-administered Kashmir.

Whilst Indian-administrated Kashmir was under a tight military curfew after Modi’s presidential decree to revoke its special status along with the applied restrictions, wave of arrests for Kashmiri top figures and activists and the increasing number of injuries, Indian PM Narendra Modi has received the United Arab Emirates’ highest civilian honor during a visit to the capital Abu Dhabi as a move to strengthen the ties among the two countries. As the Emirati envoy to India claimed that Kashmir is an internal issue to India ignoring the fact that the majority of the people living in Kashmir are Muslims.

Although the UN Secretary-General Antonio Guterres urged both neighbors to abstain from any steps that could destabilize Indian-administered Kashmir, India and Pakistan exchanged fire across the heavily-militarized Line of Control dividing Pakistan administered and Indian-administered Kashmir. According to the Pakistani authorities, six Pakistani soldiers were killed during the deadly exchange of fire. India and Pakistan had fought two of their three wars over Kashmir.

There were also two Kashmiris who were killed during a clash in Baramulla district’s Ganie-Hamam area while three Pakistani civilians died in Indian gunfire from across the Line of Control that separates Kashmir. After these incidents, President Trump offered to mediate between the two countries, and spoke of his intentions to talk with India’s Modi about the issue during G7 summit in France.

Amid heightened tensions between the two nuclear powers, Pakistan asked the UN to remove Indian actress Priyanka Chopra’s status as a UN goodwill ambassador over her support for a potential war among Pakistan and India. Furthermore, the Pakistani PM Imran Khan intensifying criticism for Modi’s administration over its abrogation for Kashmir’s special status, declared his elimination to seek further dialogue over Kashmir with India.

Despite the declaration made by the Indian authorities that there was no deaths during the demonstrations took place in Indian Administered Kashmir, officials confirmed that five civilians have been killed by Indian army in Indian Kashmir. According to data acquired by Reuters News Agency, from the time of revocation of Indian-administered Kashmir’s special status until 21 August, at least 152 people who suffered injuries from bullet shots and tear gas fire were reported at Srinagar’s Sher-Kashmir Institute of Medical Sciences and Shri Maharaja Hari Singh, the region’s two main hospitals.

On 26 August Pakistani Prime Minister Imran Khan argued that the risk of war among Pakistan and India gave Kashmir cause a global concern, has called for the United Nations action over New Delhi’s decision to abolish autonomy from Indian-Administered Kashmir. This move came after Modi’s refusal of President Trump’s offer to mediate over the disputed Himalayan territory. President Trump later said that there is no need to mediate as Modi felt he has the situation under control. A week before this move, the Pakistani government also declared that they would take the issue to the International Court of Justice.

A senior government has told the AFP News Agency that at least 500 protests have broken out in the Himalayan valley since Modi scraped the special status of Indian-Administrated Kashmir and imposed a military crackdown for more than 3 weeks. The official added that there are almost 100 civilians, at least 300 police as well as more than 100 paramilitary troopers who have been hurt during the protests.

On 30 August, Pakistan’s Imran Khan called for a nationwide show of solidarity for people in Indian-administered Kashmir. The move that was labelled as the “Kashmir hour” by Khan was supported by massive crowds that stood against the removal of its special status by Modi. This show of solidarity will be held every Friday afternoon to support Kashmiris. Khan declared on 3 September that Pakistan wouldn’t initiate a war against India amid the heightened escalation among them as well as he asserted the existence of a big danger if the two nuclear-armed nations started a war.

As a response to the campaign launched by Amnesty on 6 September to end the communication blackout in Indian-administrated Kashmir, India declared that it restored landline telephone services, but Kashmiris say that they do not work. On 7 September, India also declared that lifting the blackout on Kashmir depends on if Pakistan to stop deploying terrorists in the Himalayan valley. India had named Pakistan-based groups as terrorists a week before this. The Indian Authorities have tightened the security lockdown in the main city of Srinagar in the Indian-administered Kashmir after some defied the curfew on 8 September.

In response to the ongoing communication blackout, waves of detentions of political leaders and activists in addition to the restrictions enforced by Indian authorities against people in Indian-administered Kashmir, the United Nations voiced alarm over the actions of the New Delhi government that is endanger the future of human rights in this region, on 9 September. In this session, the Pakistani foreign minister said that the peoples of Kashmir were being tortured and raped by the Indian authorities and accused India of turning Kashmir into the largest prison in this planet. He also warned that India’s ‘illegal occupation’ of Kashmir could drive the nuclear-armed countries ‘into an accidental war’.

Part of a joint statement made by more than 50 countries in the UN including Turkey and OIC to call the Indian administration to end human rights violations in Indian-administered Kashmir noted that: “the worsening human rights and humanitarian situation in Indian Administered Jammu and Kashmir, especially following decisions taken on August 5, 2019, requires urgent attention by the Human Rights Council and human rights mechanisms”. This came after Pakistan’s Foreign Minister Shah Qureshi spoke to the UN Human Rights Council in Geneva.

Prime Minister Khan speaking at a rally in Muzaffarabad on 13 September, the capital of Pakistan-administered Kashmir, said that the ongoing crackdown in Indian administered Kashmir is “pushing more people into extremism” and added that he would present Kashmir’s case at the United Nations General Assembly in New York a week after.

During a conversation with Al Jazeera channel on 14 September he said that “Pakistan would never start a war, and I am clear: I am a pacifist, I am anti-war, I believe that wars do not solve any problems and if two nuclear-armed neighbors fight a conventional war, there is every possibility that it is going to end up into nuclear war”. He also added that “if Pakistan is stuck between the choice: either surrender or fight ’til death for your freedom, I know Pakistanis will fight to death for their freedom that’s why we have approached the UN over this critical issue”.

On 15 August the French Press Agency reported that an average of nearly 722 protests were held in Kashmir against Indian rule over the last six weeks despite a security lockdown to suppress unrest. Since 5 August there are nearly 200 civilians and 415 security force members have been hurt, according to the source.

Nobel laureate Malala Yousafzai tweeted on 16 September calling the world leaders attending the next UNGA session that will be held in New York to help children in Indian-administered Kashmir to “go safely back to school”. On the same day, the Supreme Court in India said that New Delhi government should restore normal life in Indian administered Kashmir as soon as possible.

The blockade of Indian administered region has now entered its 50th day.