What is the Future for India’s Muslims with the Rise of Hindu Nationalism?

If the Modi government wants to give India a place in international platforms, all forms of bigotry and the secret but conspicuous wish of ultra-Hindu Nationalism should be renounced immediately. If not, India will be a home for stigmatization and racism. 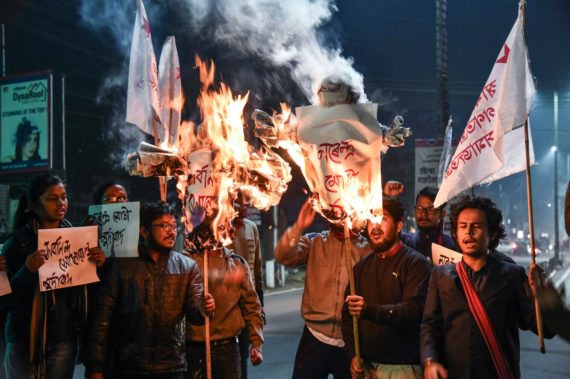 Activists of Students' Federation of India (SFI) burn the effigies of India's Prime Minister and Chief Minister of Assam in Guwahati on January 8, 2019 after India's lower house passed legislation that will grant citizenship to members of certain religious minorities but not Muslims. - The bill covers select groups -- including Hindus, Christians and Sikhs -- who moved from Bangladesh, Pakistan and Afghanistan and who have lived in India for at least six years. January 8, 2019, Getty Images.

It is said that the first documented Muslim to step onto Indian soil was Malik bin Dinar, a shaykh from Basra who also established India’s first mosque in Kodungallur, Kerala in 629 AD, just seven years after the Prophet Muhammad’s migration to Medina. The place where it was built previously occupied by an abandoned monastery and was given to Muslims by then emperor Cheraman Perumal. In a show of gratitude, they named the mosque after him, as it is known today as Cheraman Juma Mosque. This marked a peaceful start of coexistence between Hindus and Muslims. But with the unfolding centuries, this unperturbed image has been shattered into pieces. Now all that remains is building tension towards a sectarian crisis that at any time can turn even deadlier.

India’s Prime Minister Narendra Modi and his Bharatiya Janata Party (BJP) overlook the impact of rising Hindu nationalism in India, creating a vision of India which is a purely Hindu state which denies place of other religious minorities. After Modi was elected for the second term this May, a significant rise in hate crimes against Muslims have been reported. In one incident, 22-year-old Tabrez Ansari was tied up to a tree and mercilessly beaten for four hours on the sheer suspicion of stealing a bike. When the police arrived, they took him into custody without reporting his assault and without providing any medical treatment. He died three days following his arrest.

Another young Muslim man was beaten up in Gurugram for wearing a kufi, a religious symbol of Islam. In another case, Hindu extremists attacking a man on a train and pushing him off the train when his Muslim identity was known is nothing but a mere example of the rise of Hindu nationalism. These are the heinous acts of civilians, not from the administration. But, the real question lingers here: what is the administration’s approach towards criminal acts where perpetrators are motivated by Hindu Nationalism? The answer might be surprising. When a Telengana MP threatened to behead Muslim youth if any were found to harass Adivashi Women– a bold and racist statement—no immediate action was taken. Even though a complaint was filed to the local police by minority communities.

When Modi himself made statements that refugee camps housing Muslims displaced by riots were “baby-making factories,” fear takes hold in the Muslim community in India, because it instigates further marginalization rather appeasing and erasing it. While he was the Chief Minister of Gujarat in 2002, a riot under Modi’s indirect support broke out that killed over 1000 people, mostly Muslims. A senior police officer testified to the Indian supreme court that Modi had defended this violence at that time as a legitimate route through which Hindus should be allowed to vent their anger against Muslims. This police officer, Sanjiv Bhatt was suspended in 2011 for a case that goes back to 1989, almost thirty years ago and was sacked in 2015 after Modi came to power in 2014.

In the 2019 Indian Election, BJP gave Lok Sabha (Lower house of the Indian’s bicameral parliament) ticket to Sadhvi Pragya Thakur, a woman who is considered to be the mastermind behind a bomb blast that claimed lives of ten Muslims in September 2008. Some political analysts hold India’s PM Modi responsible for those hostile and militant attacks and say that his silence and passive support following those heinous incidents instigates further attacks on minorities.

On March 22, 2019, an Indian court acquitted seven men accused of being involved in a 2007 train bombing that killed 68 people—most of the victims were Muslim. BJP president and Minister of Home Affairs Amit Shah was also acquitted from all charges just after Modi came into power in 2014. He had a long list of criminal cases including murder, intimidation and instigation of sectarian violence.

The Gujarat High Court, on April 20, 2018, exonerated Maya Kodnani, a former Minister of State for Women and Child Development in the Government of Gujarat and 32 others accused of involvement with Naroda Patiya massacre in 2002 killing 57 people. Maya Kodnani was previously convicted by a court and was sentenced 28-year life sentence. But now, under the reign of Modi, she is free without conviction. These exoneration of various high profile individuals are a catalyst that incites sectarian violence and attacks on minorities especially Muslims. With these practices, the position of the current government towards Muslims in India can be easily outlined.

Human Rights Watch published a report this February stating a worrying number of deaths between May 2015 and December 2018. It states that in these years, 44 people—36 out of them are Muslim—were killed by cow vigilantes and mobs, in 12 states. Various human rights organization in India had shown grave concern about the growing number of attacks on minorities. A local organization, India Spend Initiative found that as many as 90% of religious hate crimes since 2009 have occurred after the BJP took power of the central government in 2014. The number of attacks is increasing every passing day. With grisly statistics showing the increase of attacks on Muslims, some people who have real concerns about their future started to ask the question if Hindu Nationalism and violence are the same.

In many places, the fabricated fear of being “taken over” by minorities have been a key factor for many right-wing political parties to win elections. Indian Muslims will have to confront this same approach under the Modi government. In this situation, Indian Muslims should come together and take action to cope with this temporary calamity.

A Muslim party cannot be the only solution, but a solution after all. Two minority communities in India have already proved that through political empowerment, social and economic progress can be achieved and thus, to some extent, their rights could be upheld. Though there exist some old Muslim parties like the All India Majlis-eIttehadul Muslimeen (AIMIM) and the Indian Union Muslim League (IUML), their area of influence is restricted which within Telangana, Kerala and Maharashtra states. So, in order to be a voice against the on-going discrimination of Muslims, political parties and parliament representatives across India are a must.

Division among races, cultures, religions only create chaos and anarchy. It makes progress an impossible task. So, in order to move toward good and well-being, there is no alternative than coming together to extinguish attempts to divide Indian citizens by any sect or faith. If the Modi government wants to give India a place in international platforms, all forms of bigotry and the secret but conspicuous wish of ultra-Hindu Nationalism should be renounced immediately. If not, India will be a home for stigmatization and racism.