What is Turkey doing in Idlib?

With Turkish absence, Idlib would face huge destruction, indiscriminate bombing, massacres, huge refugee flows and would become a new Raqqa, Mosul or Aleppo. Turkish foreign policy aims and the future of the Syrian civilians in Idlib are now hand in hand. 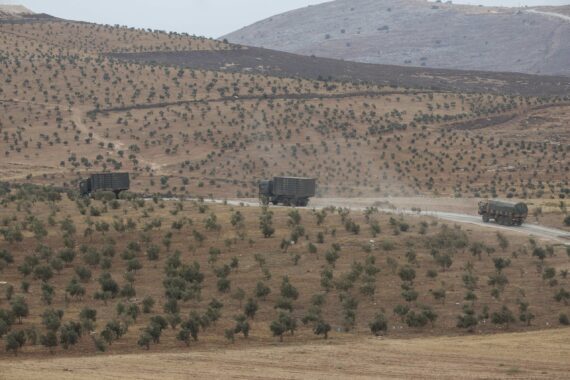 Turkish Army's armoured vehicles are seen at Reyhanli border due to the transition to Idlib, de-conflict zone, in Hatay, Turkey on October 9, 2017. Anadolu Agency

After the agreements taken between Iran, Turkey and Russia during the Astana talks, the Turkish administration emphasized that it was to observe the ceasefire between the Assad-loyal militias and the Syrian rebel factions. In addition, Turkey wants to prevent Idlib from destruction by the Russians who would use the presence of Hay’at Tahrir al Sham (HTS) as an excuse for their actions. Turkish presence on the ground therefore should provide security and stability to the region.

Turkish experiences in the Syrian war, especially after the Euphrates Shield operation, convinced the Turkish government to become proactive in the region. The government is aware that if they do not act today, another party will act tomorrow at the cost of the Syrian revolution and Turkish foreign policy priorities. Another reason for Turkish intervention in Idlib is plans regarding Afrin. As Erdogan stated, the Idlib operation is planned to be used as a step for new military operations in Syria.

Rapprochement between Turkey and Russia

Turkey’s cooperation with Russia is based on reciprocity. The Russians know how costly an operation in Idlib will be and therefore prefer to control the situation on the ground with the help of Turkey. On the other hand, Turkey wants to strengthen its hand with a tactical alliance against the YPG units supported by the US. While an offensive to isolate Afrin is still on the table, the current Idlib operation would lay the foundations for this. More, Turkey wants to protect the ‘achievements’ of the Syrian rebels in Idlib and fears of a second Aleppo, Raqqa or Mosul to become a reality in Idlib. The Turkish presence in Idlib would inherently widen the Turkish sphere of influence in Syria and across the Middle East.

Nevertheless, the alliance between Russia and Turkey is a balancing act for both sides. While Russia must keep Assad-loyal militias, who consider Turkey as an enemy, under control, Turkey has to explain its alliance with Russia to the Syrian rebels. In view of the fact that Russia has been heavily bombarding the Syrian population for some time now, this becomes an herculean task. Turkey’s main argument will be the alternative to the Idlib operation: the total destruction of the region by Russia.

Will Turkey fight against HTS?

One can see from observing President Erdogan’s statements and from the current silence of HTS that both sides want to avoid a mutual confrontation. Within HTS, discussions continue on how to deal with the new situation – while one wing fears a confrontation with Turkey, the other wants to fight Turkey at all costs.

Recent developments suggest that a deal was reached between both parties. According to several videos and pictures, HTS fighters escorted Turkish observers to Darat al Izzah. The start of the Turkish observation mission was announced today by the Turkish army itself without providing detailed information. The Turkish army will be stationed at Darat al Izzah to overlook the deployments of the PKK-affiliated YPG forces in Afrin from the south. The Turkish presence in Darat al Izzah would also give Turkey the ability to pursue further military operations inside Syria, in order to fully encircle the YPG territory in Afrin.

Nevertheless, the situation in Idlib is provocative, which makes escalation more likely. Daesh and Jund al Aqsa sleeper cells are present in the region. Assad regime agents are also available. In addition, hardliners within HTS will want to take action against Turkey. Therefore, even if HTS decides not to attack Turkey, terrorist attacks on Turkish troops are likely. As a result of such attacks, the situation between Turkish security forces and HTS could quickly escalate.

The situation became even more complicated after Daesh militants in the Uqayribat region east of Hama crossed the Khanasser road towards the rebel-held areas in north-eastern Hama. The Uqayribat pocket of ISIS was besieged by the Assad regime and they crossed into the rebel-held territory without being bombed by the regime or Russia. Daesh in the rebel-held area began to fight HTS forces and captured several villages. The outcome and effects of this recent development are unpredictable, but it will surely complicate the situation in Idlib.

What would have happened if Turkey hadn’t intervened in Idlib?

After the former official branch of Al-Qaeda, the Al-Nusra front publically abandoned their link to Al-Qaeda and changed its name to Jabhat Fath al Sham. This move was interpreted by the US administration as a foolish attempt, which does not include any sustainable change of the group. Additionally, Jabhat Fath al Sham created a broader coalition called Hay’at Tahrir al Sham with other Islamist groups and the formerly US-backed Nureddin Zengi Movement. The new formation is led by Abu Jabir, the former leader of Ahrar al Sham. However, insiders claim that he is a “leader under Muhammad al-Jolani,” the former leader of Al-Nusra and the new military leader of Hay’at Tahrir al Sham. Recently, Abu Jabir was taken from his position and Muhammed al-Jolani was chosen as the temporary leader of HTS until a new leader is appointed. This decision comes after Nureddin Zengi, Abu Saleh Tahhan and his followers, Ibn Teymiyyah battalion and other several small units left the formation of Hay’at Tahrir al Sham.

With the increasing control of HTS, the region around Idlib was seen as a ‘safe-haven’ for Al-Qaeda. After the defeat of Daesh, the international community would have its new target – HTS. If Turkey had not intervened in Idlib, Russian and Iranian backed regime militias may have started a campaign to invade the region with the approval of the international community in the name of the “War against Terror.” This campaign would lead groups like Ahrar al Sham, Feylaq as Sham and other Syrian rebel factions to unite with HTS to resist against regime militias. This resistance would lack legitimacy and therefore foreign backing. The Russian-backed regime militias would have used genocidal tactics to conquer the area which would have ended in a massive refugee flow towards Turkey. Already the largest host of Syrian refugees, Turkey would have had to deal with a new refugee crisis and would have lost its leverage in Idlib to its enemy in Damascus. Additionally, Al-Qaeda would have remained in the area and would have started a guerilla tactical war, which would have resulted in a decade-long insurgency. Revolutionary factions in Idlib could evolve into terrorist groups within this given scenario.

All in all, while the Turkish intervention in Idlib carries risks, it is a necessary step that needed to be taken in order to save civilians in Syria and preserve Turkish interests. As the main advocate of the Syrian rebel factions, the largest host of Syrian refugees and as a guarantor during the Astana talks, there should be no doubt and discussion over Turkey’s involvement in solving the Syrian crisis. With Turkish absence, Idlib would face huge destruction, indiscriminate bombing, massacres, huge refugee flows and would become a new Raqqa, Mosul or Aleppo. Turkish foreign policy aims and the future of the Syrian civilians in Idlib are now hand in hand.