What Travel Restrictions Reveal about Palestinian Life under Israeli Occupation

My uncle passed away in 2015 in the West Bank and my mother was given another exceptional permit to attend his funeral; however, it was issued after my uncle was buried. 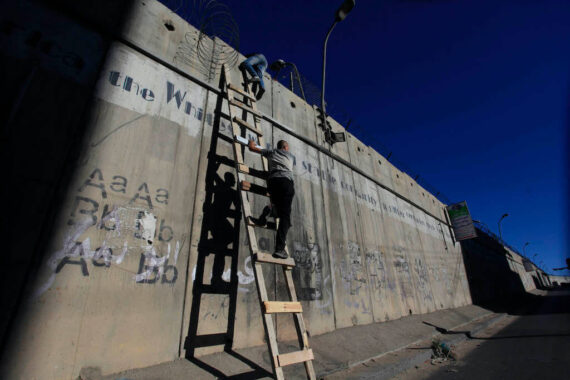 Young Palestinians climb over the Israel's separation barrier as Palestinians are not allowed to enter Jerusalem for Friday Prayer at Al-Aqsa Mosque at a checkpoint between Jerusalem and West Bank where tight control is carried out to Palestinians in Jerusalem on July 11, 2014. Photo by Issam Rimawi. Anadolu Agency.

Today, Israeli restrictions imposed on the freedom of movement of Palestinians shape our lives to the minutest details. The separation of Palestinians from one another due to Israeli policies is not new and takes different forms. My family, like thousands of others, have suffered a great deal because of Israeli travel restrictions.

My mother grew up in the West Bank city of Bethlehem. Having moved to Gaza upon her marriage to my father, she had to change her address, which meant that she had to give up her West Bank ID. She never thought that this would create a problem for her later in terms of her ability to see her own family in the West Bank.

In the 1970s and 1980s, movement between Gaza and the West Bank was relatively easy. All one needed was to take a taxi or drive between the two territories. This changed after 1993, the year that saw the signing of the Oslo Accords between Israel and the Palestine Liberation Organization (PLO).

When the Oslo Accords were signed a new yet more complicated system of permits was put in place which affected the freedom of movement of the Palestinians in the Gaza Strip and the West Bank. According to this system, Palestinians needed to get a permit to be able to move between the two territories. Obtaining these permits became more complicated and they were issued for a short period of time.

I remember that in 1999, an Israeli officer turned my sister back, who was 16 then, saying that she needed a special kind of permit to be able to travel with us. The outbreak of the Second Intifada in 2000 was the straw that broke the camel’s back in relation to Israel’s travel restrictions on the Palestinians: it became nearly impossible for Palestinians to obtain a permit to move between the Gaza Strip and the West Bank.

In 2003, my maternal grandfather passed away in Jericho without my mother being able to obtain a permit to mourn his death.

In 2003, my maternal grandfather passed away in Jericho without my mother being able to obtain a permit to mourn his death. He was buried without her being allowed to bid him a final farewell, although she literally lived an hour away. Travel restrictions have only got worse over the years. In 2008, my grandmother passed away in Jericho too, and again, my mother was not able to participate in her funeral procession.

It was only in 2012 that my mother was finally able to get a permit for four days to visit her West Bank family. She was given four days, but she stayed there for 32. By Israeli definition, she “overstayed” her permit in her own hometown. The irony lies in the fact that Israel now considers my mother a Palestinian from Gaza who has no right to travel to the West Bank except under exceptional circumstances, and with the provision that she applies for and gets a permit.

Israel now allows Palestinians in a limited number of cases to travel between the Gaza Strip and the West Bank. This includes some patients with chronic or life-threatening diseases. Some of these patients get a permit for the first time, but not for a second. This has been the case for some cancer patients who were given a permit to have their first chemotherapy session, but not the second one. Many of these patients died waiting for these permits. Others are asked to collaborate with the Israeli security in return for being given a permit.

The Palestinian passport, or rather the travel document according to the Oslo Accords of 1993, allows its bearer – theoretically – to enter the West Bank and the Gaza Strip.

In 2015, my uncle passed away in the West Bank and my mother was given another exceptional permit to attend his funeral; however, it was issued after he was buried. In 2019, my mother was given another permit that allows her to go to Jerusalem for breast cancer treatment, but this same permit didn’t allow her to visit her West Bank family, many of whom live a few miles away.

Read: Israeli Jewish Extremism and Radicalization in the 21st Century

As a result of this system of permits, Palestinians have become fragmented like never before. It is easier for us to meet in another country than to meet in Palestine. I personally have met some of my West Bank family members in Jordan, Turkey, Sweden, Germany, and the U.S. – but not in Palestine. In light of this reality of fragmentation, Palestinians have sought refuge in virtual spaces with social media becoming the platform where they meet online and discuss issues of concern, be it family or political issues.

The recent offensive on the Gaza Strip in May 2021 and the ongoing violations in Sheikh Jarrah have revealed without a shadow of doubt the importance of online and social media organizing. The growing solidarity with the Palestinian people during and after this offensive has shown that online spaces could create an alternative for a people who have been systematically silenced in physical and mainstream spaces and outlets. These online spaces are not without challenges, but they created a window for Palestinians to interact.

Citizen journalism became prominent in the recent escalation in Gaza with millions of people worldwide turning to people on the ground to listen to their stories. From Sheikh Jarrah in Jerusalem to the Gaza Strip, and Lod to Jaffa, Palestinians seemed to finally have a unified narrative that can’t be suppressed by travel restrictions and physical barriers. This narrative has shaped the discourse of political debates in the Middle East and beyond.

This Palestinian narrative, advocated by people on the ground in Gaza, Jerusalem, and elsewhere, is free from factionalism and the liberal discourse which imposes limits on what Palestinians can say and shies away from calling a spade a spade. What is happening in Sheikh Jarrah and Jerusalem is a continuation of a decades-long campaign of ethnic cleansing and settler-colonialism. Travel restrictions, in this context, are only meant to separate Palestinians from one another, so that they can’t physically get together and act as a nation that has its own agency.

One lesson from the recent mini-intifada is that any approach that deals with Palestinians separately, be it in Gaza, Jerusalem, Jaffa, or Haifa, is doomed to fail. Palestinians today have a strong sense of nationhood and the more Israeli violations continue against them, including in Israel, the more united Palestinians will become and the better they will act as a collective. Travel restrictions, just like violations against their basic rights, which take the form of separation and settler-colonialism, are doomed to fail and will only lead to another.

Those with mind and reason should learn the lesson that attempts to strip Palestinians of their agency and unity will only fail, and that Palestinians will always find an alternative way to create the necessary spaces to fight for their rights.