What was Offered to Ankara in Moscow?

Maintaining a negotiation process with Russia or the U.S. will not provide Turkey with ultimate solutions to its security needs, but create time pressure on Ankara to act unilaterally. Therefore, to eliminate the PKK in Syria, Ankara has no choice but to take matters in hand. 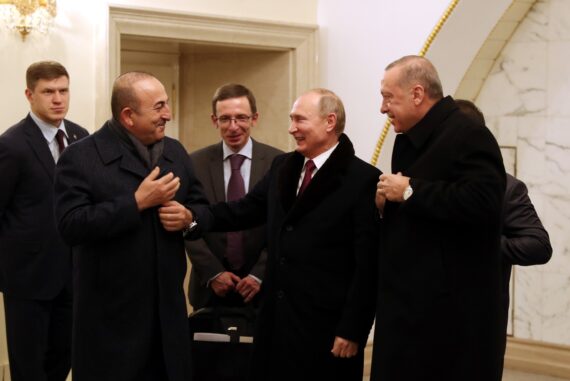 President of Turkey Recep Tayyip Erdogan and Foreign Minister of Turkey Mevlut Cavusoglu leave after a meeting with President of Russia Vladimir Putin in Moscow, Russia on January 23, 2019. AA

Turkish President Erdogan and Russian President Putin’s meeting on Wednesday was a timely opportunity to answer many questions regarding the near future of the Syrian conflict. However, it seems that a new situation appeared vis-a-vis Turkey-Russian relations in Syria and Turkey’s ongoing fight against terrorism. Until now, the two leaders have managed to overcome many challenging issues on bilateral and regional levels. Although there have been many suspicions about relations between Turkey and Russia, especially after the downing of a Russian fighter jet in 2015 by Turkey, rapid progress has been made on many issues between Erdogan and Putin.

The Euphrates Shield and Olive Branch military operations, the subsequent Astana process and the challenging milestones, such as the Idlib agreement, were made possible by the personal initiatives of the two leaders. The fact that the compromises reached between the two leaders behind the challenging processes between the two countries have reflected on the ground quickly. At the same time, Turkey’s evolving role in the Syrian conflict as the key actor in the post-2016 period has also significantly improved Putin’s perception of Turkey. However, what will come next seems to be more difficult to understand. The reason is very simple. Moscow is seeking to keep Turkey’ s role as part of the equation in Syria while at the same time it is trying to limit Ankara’s role over many security issues in the country.

Following Trump’s decision to withdraw U.S. troops from Syria, Moscow’s position on the east of the Euphrates has emerged as a reaction against what Turkey wanted to achieve in the region. Moscow has firstly chosen to be very cautious about the U.S.’s decision to withdraw, but later, it attempted to constrain Turkey’s potential comprehensive military move that would target the YPG in the eastern Euphrates. This was the reason why Russia offered a limited safe-zone to meet Ankara’s security concerns emanating from the YPG during the first Turkish visit to Moscow upon Trump’s decision. The most important part of the plan for Russia was to facilitate an agreement between the Syrian regime and the PYD to take over the YPG-led areas and to hand them over to the regime by restructuring the YPG element as an integral part of the Syrian military. As a matter of fact, Moscow started this process without delay and accepted the PYD in Moscow and initiated a negotiation between the regime and the PYD in Damascus.

Putin’s emphasis on the Adana Protocol, signed between Turkey & Syria in 1998 and redesigned in 2010 to fight against the PKK, brought new dynamics to the  Russian approach to Turkey’s next move against the PKK/PYD in Syria.

However, the PYD’s maximalist demands to maintain its autonomy in the region, the U.S.’s efforts to constrain the PYD’s relations with Moscow, and perhaps most importantly Turkey’s military deterrence prevented Moscow from achieving this plan. But this does not mean that Moscow will give up on maintaining its policy of pushing a rapprochement between the Syrian regime and the PYD. Putin’s emphasis on the Adana Protocol, which was signed between Turkey and Syria in 1998 and redesigned in 2010 to fight against the PKK terrorism, brought new dynamics to the  Russian approach to Turkey’s next move against the PKK/PYD in Syria. The protocol gave Ankara the right to intervene in the context of the fight against PKK terrorism while putting Syrian government in a responsible position to prevent the PKK’s mobilization in Syria in coordination with Ankara.

Putin’s reminder of the protocol has two objectives: First, Turkey’s fight against the PKK is perceived as legitimate by Moscow. Secondly, by underlying a bilateral agreement between Turkey and Syria in the fight against the PKK in Syria, Russia seeks to promote rebuilding dialogue between Ankara and Damascus regarding the fight against terrorism. But this second point is hardly possible for Turkey. President Erdogan’s statement, which made it clear that Turkey would reconsider every detail of the Adana Protocol can only point out that Ankara could carry out its struggle against the YPG-PYD in Syria through this legal framework. Therefore, while the protocol is perceived by Moscow as an opportunity to appease Turkey’s stance against the Syrian regime, it is evaluated by Ankara only as a legal framework that would justify Turkey’s military move against the YPG in Syria.

Maintaining a negotiation process with Russia or the U.S. will not provide Turkey with ultimate solutions to its security needs in Syria, but create time pressure on Ankara to act unilaterally. Ankara has no choice but to take matters in hand and to eliminate the PKK.

If the protocol is to be considered as a reference point, then the Syrian regime must fulfill its responsibilities. That is to say; the Syrian regime must initiate a process that will eliminate the entire political structure and capabilities of the PYD-YPG in Syria. However, the question of how much of it is possible remains unclear. It is not realistic to expect for the Syrian regime to have such a capacity to roll back the PYD-YPG while the PYD-YPG has considerable control over strategic territories in the eastern part of Euphrates river, and Russia is initiating a deal between Damascus and the PYD. More importantly, given the U.S. offer to create a safe zone for Turkey and search for a new formulation to protect the YPG, it is not quite realistic to expect that the Syrian regime will be able to carry an agreement with the PYD.

These are points that should be considered by Ankara. Therefore, if Ankara wants to implement the Adana protocol as a legal reference point, then there will be no options left for Ankara except for the use of military action against the PKK in the region. At the end of the day, Ankara has to adopt its own scenario in which two superpowers have their own strategy about the future of the PYD, which seem to be in contradiction with each other, but eventually, both of the options look the same for Turkey at the of the day. Maintaining a negotiation process with Russia or the U.S. will not provide Turkey with ultimate solutions to its security needs, but create time pressure on Ankara to act unilaterally.

Therefore, to eliminate the PKK in Syria, Ankara has no choice but to take matters in hand.