The joint Syrian-Turkish operation aims initially to liberate Arab areas from the YPG. This clearly contradicts with the critics who state that the main goal of the operation is demographic engineering. 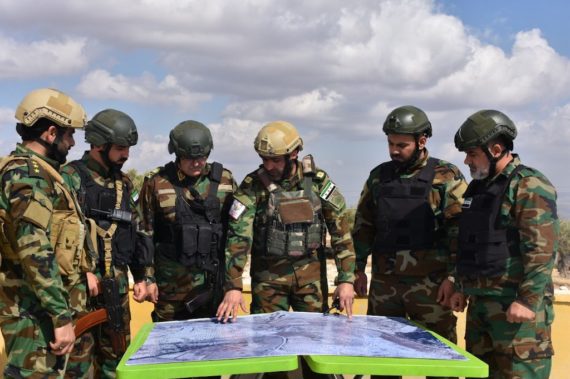 The Syrian National Army, component of Syrian opposition forces, held the military exercise in Afrin, Syria, near the border with Turkey, to support Turkish Armed Forces, ahead of Turkey's planned operation in the east of the Euphrates River in northern Syria, October 07, 2019. AA

As a result of Turkey’s decisiveness, the White House announced that the U.S. forces in Syria will withdraw in expectation of a Turkish military operation into the region, opening the way for Turkey and the Syrian opposition to go after the YPG, the Syrian branch of the PKK terrorist organization. Since then, many experts have been discussing the potential scope and implications of the operation, but it is most likely that the operational plan of the joint Syrian-Turkish military operation will occur in Arab areas between Tal Abyad and Rasulayn and in the region of Manbij west of the Euphrates.

Immediately before and since the announcement by the White House, many developments have occurred on the ground in Syria and Turkey. Most notably, the U.S. soldiers evacuated their bases along the Turkish-Syrian border and left the area. With this move, the U.S opened the way for a joint Syrian-Turkish military operation between Tal Abyad and Rasulayn. A second development is ongoing on the Turkish side of the border where Turkish Armed Forces are amassing troops and equipment between Akcakale and Ceylanpinar, which are on the other side of the border from Tal Abyad and Rasulayn. This Turkish preparation also includes the buildup of howitzer and artillery positions suitably located to shell the strip between Tal Abyad to Rasulayn. The armed Syrian opposition, the Syrian National Army, has sent reinforcements to Jarablus to cross into Turkey and take position along the Syrian-Turkish border strip between Tal Abyad and Rasulayn.

On the other side, the region of Manbij is seeing an intensive arrival of reinforcements by the Syrian National Army and the Turkish Armed Forces. The Syrian opposition has sent massive reinforcements to the frontlines of Manbij chanting that they will liberate Manbij from the terrorists occupying the area. Additionally, the Turkish Armed Forces have been sending heavy armory and Special Forces through Jarablus towards the region of Manbij.

The region of Manbij is crucial as the Assad regime in the south and the Syrian opposition in the north are of equal distance to Manbij city, and both sides have ambitions to control this strategic area. This includes the Tishreen dam, which is located at the Euphrates in Manbij and is the second most important dam in Syria after the Tabqah dam. In case of a military operation, both sides may race for control over this area, and the YPG is likely to hand the region to the Assad regime which will improve its speed of advance. In this regard, the Syrian opposition may try to cut the advance route of the regime as they are stationed west of Manbij and received training on air-landing with Turkish helicopters. By cutting the route of the regime to Manbij, the Syrian National army can guarantee its control over the region. However, if they cannot act fast enough, the region will fall to the regime, opening its way towards the east of the Euphrates. From the Turkish perspective, Manbij is also of upmost importance as its liberation will enable the return of the Sulayman Shah tomb to its original place by the Euphrates River.

The joint Syrian-Turkish operation will firstly aim to liberate Arab areas from the YPG. By doing so, the operation will in its initial phase contradict critics who state that the main goal of the operation is demographic engineering. Additionally, by liberating Arab areas first, the number of recruits in the Syrian National Army may increase massively as the local Arab population and tribes are strong supporters of the Syrian opposition. The scope and possibility of a second stage towards Arab areas in the south or towards mainly Kurdish populated areas in Ayn al Arab and Qamishli may most likely be decided after the Trump-Erdogan summit on November 13.