What Will Pre-Electoral Alliances Bring to the Turkish Political System?

By increasing voter turnout, the pre-electoral alliances invalidate the principle of “If you don’t vote, you don’t count.” 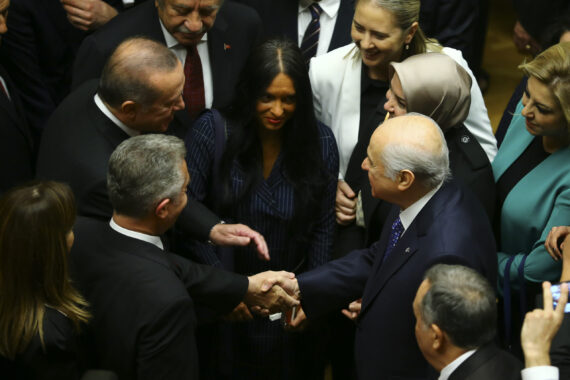 Turkish President Recep Tayyip Erdogan (L) and Nationalist Movement Party's leader (MHP) Devlet Bahceli (R) have a conversation during a reception held for the third legislative session of the 26th term at the Grand National Assembly of Turkey (TBMM) in Ankara, Turkey on October 1, 2017. Anadolu Agency

One of the most important consequences of a consensus-based climate formed between the AK Party and the MHP after the July 15 coup attempt was the legal amendment allowing the formation of formal pre-electoral alliances in Turkey. The legal amendment consisting of 26 articles was first approved by a majority vote in the Assembly and then finalized by the approval of President Erdogan on March 15. The approval of the amendment results in striking changes in electoral and political party laws that will be implemented firstly in the 2019 parliamentary elections. These new regulations also show that pre-electoral alliances will be one of the hot topics of Turkish politics both in the short and long term. Thus, it is crucial to evaluate the effects of new regulations on the future of political parties and election systems.

It is possible to say that one of the clear-cut effects of the new regulations will be on voting behavior in Turkey. Surveys show that pre-electoral alliances seem to increase voter participation by reducing the uncertainty about the formation of government after the elections. For instance, a survey on 223 parliamentary elections in 19 countries between 1970 and 2002 reveals that pre-election alliances have increased voting turnouts in elections by an average of 1,5 %. Thus, new regulations will maximize voting turnout especially in the long term.

Another striking effect of pre-electoral alliances is reducing a representation problem in elections. By increasing voter turnout, the pre-electoral alliances invalidate the principle of “If you don’t vote, you don’t count.” This is due to the fact that, especially in countries implementing proportional representation systems such as Turkey, pre-electoral alliances increase voter motivation to go to the polls by enabling a fairer political climate for minor parties. Voters of minor parties who would usually refrain from going to the polls by assuming that the party could not pass the electoral threshold will also participate in elections if their party forms an alliance. The possible outcomes of this phenomenon are increases in government effectiveness, the creation of a more responsive and accountable government, and the provision of a more equality-based social representation in the parliament.

The ideological cohesion of parliamentary parties and its implications

Another possible outcome of the new regulations may be ideological cohesiveness between the parties. As was revealed in a survey on pre-electoral coalitions from 1946 to 1998 in 20 countries, pre-electoral alliances are more likely to occur among ideologically coherent parties. The formation of alliances among ideologically coherent parties also contributes to the consolidation of democracy by facilitating the formation of a consistent party system. Indeed, it should be remembered that ideological cohesiveness was the main criterion of forming an informal alliance among parties in Turkey in the past. Political parties with consistent ideological baggage preferred to form an informal alliance in order to pass the 10% threshold.

In this context, it should be noted that the incompatibility between party ideologies and voter bases will make it difficult to form an alliance, and it is unsustainable for the ideologically non-coherent parties to keep their voters when they form an alliance. This fact will be one of the main aspects of alliance negotiations held among parties.

Consequently, it is crucial to evaluate the short and long-term effects of pre-electoral alliances on Turkish politics. While evaluating this new phenomenon in Turkish politics, it will be useful to consider the election system, especially the size of the electorate and its possible effects on the formation of alliances. This direction will be more useful to understand long-term effects of pre-electoral alliances and possible further regulations in election and party systems.