What's the Special Chemistry Between Russia and Israel?

The multi-million Russian-speaking diaspora in Israel and a few but influential Jewish diaspora in Russia, trade and economic relations, the same position regarding the Second World War and the fight against modern Nazism in the West, as well as religious and historical ties between Israel and Russia make bilateral relations durable. 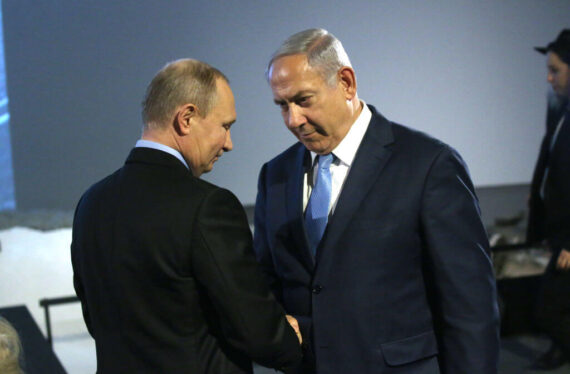 The current frequency of interaction between Russian President Vladimir Putin and Israeli Prime Minister Benjamin Netanyahu often raises questions. In particular, analysts stress the special “chemistry” of relations between the two statesmen, also stressing that “Putin supported Netanyahu” on the eve of the parliamentary elections held in Israel on April 9. It is difficult to deny the importance of personal contacts in bilateral relations. However, the decisive factor is still the logic of bilateral interests and the existence of common interests and ideological attitudes.

It may not be well known that Israel appeared on the world map largely due to the support that it received from the Soviet Union. After the establishment of official relations in 1948, diplomatic relations between Israel and Russia were broken twice – a unique situation – to be fully restored only in 1991.

During the period of the late USSR, Israel, as the “main ally outside NATO,” was viewed in Russia as a U.S. puppet in the Middle East. At the same time, within its Middle East policy, the USSR was approaching Arab countries with noticeable bias.

The USSR’s obstruction of Jewish immigration led to the adoption of the notorious Jackson-Vanik amendment by the United States in 1974, restricting U.S.-Soviet trade. Despite the fact that free immigration from the USSR was allowed in 1985, the Amendment was canceled in 2012. Moreover, the collapse of the Soviet Union and the formation of a number of new states, including the Russian Federation, led to a mass exodus of Jewish citizens to the United States, Germany, and Israel. In order to compete for qualified Soviet expats (engineers, doctors, scientists, intellectuals and many others), the Israeli special service “Native,” specially created for the repatriation of Jews in 1951, notably enlarged its activity.

As is known, after the U.S., in some areas, Israel is the first innovative country in the world. It is difficult to deny the fact that in many respects this was made possible thanks to the successful repatriation policy of the citizens of the USSR/Russia to Israel. Nowadays, the Russian-speaking diaspora of Israel, whose number is around 1 million, has an influential force in the country. A significant proportion of the cabinet and Knesset deputies are Russian-speaking Israelis.

On the other hand, the image of Israel has undergone a marked improvement in Russia, compared to a complete rejection of the Jewish state in the Soviet period. The fact that Russia did not support the relocation of the U.S. Embassy from Tel Aviv to the “new old capital” Jerusalem and that it did not support the recognition of the Golan Heights as Israeli territory did not prevent dialogue between Russia and Israel. In the end, the State of Israel did not recognize the independence of Ossetia, Abkhazia and the return of the Crimea peninsula to Russia.

The image of Israel has undergone a marked improvement in Russia, compared to a complete rejection of the Jewish state in the Soviet period.

There are several principal circumstances for Russia in its consistent effort to build a healthy relationship with Israel.

First of all, Israel did not join the U.S.-imposed anti-Russia sanctions, which found widespread support in the West. This allowed for both parties to have full-fledged trade and economic relations, especially in the high-tech sphere, which are not in the shadows of any reciprocal economic restrictions.

Second, Russia and Israel are on the same side of history in assessing the events of the Second World War, acting jointly against attempts by a number of countries, especially young EU members, to re-write history in order to justify or completely eliminate Nazism and the Holocaust from history.

In this regard, it suffices to note that from 2018, Israel began to celebrate Victory Day over fascist Germany on May 9. The celebration of Victory Day in the Second World War takes place in Israel on the same day as it does in Russia. Israeli soldiers not only participate in various celebrations in their country on this occasion but they are also honored guests at the annual Victory Parade on the Red Square in Moscow.

Thirdly, an agreement on visa-free entry has been in effect between Russia and Israel since 2008. For obvious reasons, in Russia Israel is perceived, without exaggeration, as the main destination of religious pilgrimage. In addition, Israel made an obvious bet on Russian patients for its medical services sector. The large influx of Russian patients led to the formation of a special segment of the healthcare industry, targeting Russian-speaking clients.

The fact that Israel did not join the U.S.-imposed anti-Russia sanctions, and the fact that Russia and Israel are on the same side of history in assessing the events of WWII as well as the visa-free entry between the two countries have allowed bilateral relations to flourish.

Despite the fact that there are enough reasons for disagreement between Russia and Israel in the Middle East, these three listed circumstances, coupled with a large Russian-speaking diaspora in Israel, allows for the two states to build working relationships.

Russia was an active participant in the process of concluding a nuclear deal with Iran, despite the fact that from an Israeli point of view, Iran is a direct threat to the existence of the Jewish state. In addition, it is necessary to note that Iran, along with Russia and Turkey, is an important participant of the Astana process on the Syrian Civil War, with whom Russia is engaged in an active political dialogue. However, as we see, Russian diplomacy quite successfully balances its relations with Iran and Israel.

Even the incident where the Syrian air defense system shot down Russian II-20 reconnaissance aircraft in September 2018 did not lead to a deterioration of Russia-Israel relations. This was despite the fact that the Russian state’s official rhetoric was that the plane was put under fire as a result of provocation arranged by the Israeli Air Force.

Russia was an active participant in the process of concluding a nuclear deal with Iran, despite the fact that from an Israeli point of view, Iran is a direct threat to the existence of the Jewish state.

Nevertheless, Israel is perceived in the Russian political establishment as an important partner in the Middle East, balancing relations between Russia and Arab countries. At the same time, the Russian leadership positively notes that Israel demonstrates an understanding of Russian interests in spite of its strategic relations with the U.S. and NATO. It should be repeated that the fundamental point for Russia is that Israel shares the basic ideological attitudes with Russia and in the Russian case seeks to pursue a more independent foreign policy from the U.S.

Israel is also a valuable trade and economic partner for Russia. The trade over between the two countries in 2018 amounted to around 2.7 billion dollars, where exports of goods from Russia stood at 1.95 billion dollars, and exports from Israel at 760 million dollars.

Beyond these figures, it is important to note that Israel is a partner of Russia, both potential and acting, in a number of innovative areas including defense technologies, agriculture, medicine, and computer technologies. Russia is quite serious about technological cooperation with Israel and about adopting the advanced Israeli experience in building an innovative economy.

Israel is perceived in the Russian political establishment as an important partner in the Middle East, balancing relations between Russia and Arab countries.

This context of relations, as well as the intensity of the processes in the Middle East, primarily in Syria and around Iran, lead to incessant contact between the two countries at the highest level. Over the past 10 years, the number of meetings between President Putin and Prime Minister Netanyahu reached 14 – which is more than the number of meetings conducted in the previous history of bilateral relations.

This gave many observers reason to talk about the special relationship between the two heads of state – Putin and Netanyahu – but the truth is that whatever relations are at a personal level, they cannot have a decisive contribution to bilateral relations without a solid fundament of mutual interests.

Let us list again, the multi-million Russian-speaking diaspora in Israel and the not so numerous but influential Jewish diaspora in Russia, trade and economic relations, the same worldview regarding the Second World War and the fight against modern Nazism in the West, as well as religious and historical ties exist between Israel and Russia.

At the same time, there are many channels of communication and dialogue between the two countries: both official and unofficial, as well as the media. The Israeli point of view, in particular, on the processes occurring in the Middle East, is constantly present at the central channels of Russian media and therefore is well known among Russians.

In conclusion, it is worth noting that Russian diplomacy seeks to establish balanced, equidistance relations with all countries, including the Middle East. It can be said that despite the difficulty and sometimes impossibility of this task, Russian diplomacy has certain successes on this matter, as can be seen in the case of Israel.