Where did the Terrorists in the Trucks go?

The Qandil leadership believes that it will lose value if Daesh terror is eliminated. They try to continue their existence through the Daesh threat. In other words the PKK tries to justify itself by the Daesh threat.

The article explains Daesh and YPG’s corrupt partnership in Raqqa with vivid pictures that leaves very few to the imagination, including a footage of Daesh terrorists, who were incarcerated in Raqqa, being evacuated out of the city by the YPG.

This article is important in terms of revealing the dirty cooperation between the terrorist organizations and also the US’s open support to this partnership. I use the word “reveal” because this exchange between YPG and Daesh is not something new. In the past there have been similar evacuations in areas where YPG took control over Daesh. The captured Daesh terrorists were deported to different regions using newly opened roads. “It was to prevent further conflicts and deaths” was the answer they got when they asked for the reason, and when intelligence agencies confirmed these roads.

This exchange between YPG and Daesh is not something new. In the past there have been similar evacuations in areas where YPG took control over Daesh.

It should be stated that the information provided in the BBC article is only a fraction of what is out there. The parts excluded from the photographs hide even more information on the corrupt cooperation between the terrorist organizations that is based on self-interest. It is possible to gain this information by tracing the thousands of Daesh terrorists that were deported with trucks.

The information provided in the BBC article is only a fraction of what is out there.

I am including the shocking information, which I have acquired during my research, without any commentaries:

It is important to understand how these terrorists came to Turkey. This is where the second stage of the cooperation between the terrorist organizations begins. A small group of Daesh terrorists have been smuggled to Turkey by the PKK.

So, do these Daesh terrorists pose a threat for Turkey? Not technically. The reason is hidden in the detailed Daesh operations that took place last week.

According to the BBC’s article, the footage of Daesh terrorists being deported is dated on November 13. Security units have determined the movements of PKK smugglers in the Turkish border after this date. Once it was discovered that there were Daesh terrorists with the smugglers, their destinations were monitored. This resulted in the discovery of the terror network. It should be reminded that a massive Daesh operation took place on November 10 in which 82 people were arrested in Istanbul and 101 out of the 245 suspects were arrested. I have been informed that among these arrests are the Daesh terrorists that were smuggled into Turkey.

Let me give you a final note to finish off: Daesh terrorists that were deported out of Raqqa were not only taken by trucks. Many “members” of Daesh, which work for various intelligence agencies, were escorted out of the country by helicopters. 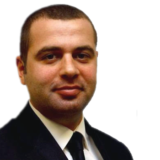