Will President Trump convince Congress to change course? Or, if unsuccessful, will he utilize his power as president to delay or waive sanctions? If the President chooses to risk political controversy on Turkey’s behalf, a greater question remains: how will U.S.-Turkey relations fair as a result? 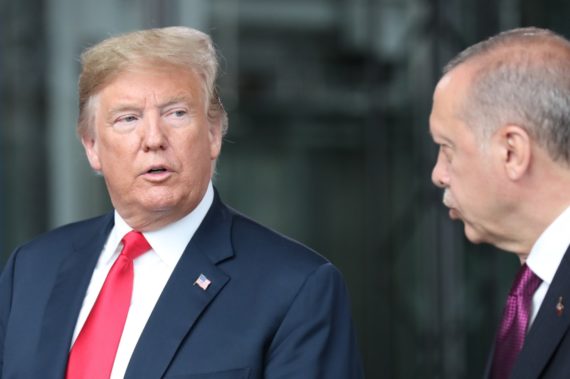 Turkey’s purchase of Russian S-400 missile system continues to prompt debate in Ankara and Washington. The United States maintains that Turkey’s use of the Russian system will subject American F-35 fighter jets to potential exploitation by competitors. At the same time, Turkey has stressed that the missile defense system is key to preserving its sovereignty and security. In the past few weeks, tension over the purchase has reached new heights. As the first delivery of the the Russian system arrived in Turkey, many in Washington were eager to respond. In a statement released by the White House, the Trump administration announced Turkey’s removal from the U.S. F-35 program. Several U.S. government officials have argued that Turkey should also face sanctions. However, in contrast to Congress and many of his own appointed officials, President Trump has refrained from offering condemnations. His comments on the S-400 dispute have led many to consider the President as a wild card, who may choose to protect Turkey from a harsh domestic backlash.

Over the past month, President Trump has demonstrated a clear reluctance to draw lines in the sand over the S-400 issue. After meeting with President Erdogan in Osaka, the President differed from his Turkish counterpart in how he recounted their bilateral meeting. President Erdogan’s post-meeting comments suggested that a resolution had been reached on this critical point of tension. He called Turkey’s S-400 purchase “a done deal” and stated that he received personal assurance from President Trump that the United States will not impose sanctions on Turkey. On the same day, President Trump painted a much less detailed picture. When asked if the United States will impose sanctions, the President failed to directly respond. In his response, he commented on the Kurdish issue in Syria, the release of American Pastor, Andrew Brunson, from Turkish detention, and on his personal rapport with President Erdogan—and yet he failed to provide any clarification on the U.S. sanction threat.

The one main point of presidential agreement President Trump did elaborate on centered on shared criticism of the Obama administration. Under President Obama, Turkey had first attempted to purchase the U.S. Patriot missile system, but several attempts at negotiations stalled and a deal was never struck. President Trump explained, “But, honestly, I’m all for our country, but [President Erdogan] got treated very unfairly. He was told you can’t buy it, you can’t buy it.” While calling the situation a “problem” and “a mess”, he concluded that both leaders would continue to work on the issue. Overall, the President provided little insight into any concrete developments that may have been achieved in Osaka. Instead of listing U.S. expectations for the future, his comments focused on how Turkey’s Russian purchase could have been avoided in the first place.

With Turkey’s expulsion from the F-35 program affirmed and talk of sanctions buzzing in Washington, all attention has turned to President Trump.

In direct contrast, members of Congress and the national security apparatus have been eager to criticize Turkey and many have clearly advocated for a hardline response. As recently as this past week, congressional action has targeted Turkey: Republican Senators Rick Scott and Todd Young proposed a resolution that condemns Turkey’s S-400 purchase and calls on the President to issue retaliatory sanctions. Additionally, before the system’s delivery, five other major pieces of legislation circulated in Congress with the objective to exclude Turkey from the F-35 program. Moreover, over the past month, comments made by officials from both the State Department and the Department of Defense have sought to push the administration towards the sanctions option. In a letter to Turkey’s defense minister, the former U.S. Acting Secretary of Defense proposed that Turkey would face both sanctions and disassociation from the F-35 program if the country activated its purchased missile systems. Secretary of State Mike Pompeo commented, “The law requires that there be sanctions and I’m confident that we will comply with the law and President Trump will comply with the law.” Particularly in this presidency, rarely have issues brought together both sides of the aisle and members of the administration. However, instead of supporting recommendations that might satisfy his appointed officials and win him political points in Congress, the President has not embraced calls for severe reprisal.

In fact, President Trump has continued to utilize talking points similar to those he employed in Osaka. In a cabinet meeting, when speaking in reference to Turkey’s removal from the F-35 program, he stated, “It’s a very tough situation that they’re in, and it’s a very tough situation that we’ve been placed in the United States … we’ll see what happens. But it’s not really fair.” Though he denied he was “sticking up” for Turkey, the President once again highlighted his good relationship with President Erdogan. Last week, in a response to a question inquiring about sanctions, he told reporters that the administration was not currently looking at the sanctions option. When the President met with a group of Republican Senators to discuss the topic further, it was reported that he advocated for negotiations with President Erdogan. His reportedly pointed discussion with Senator James Risch on the matter suggests the President’s intent to make headway in the closed-door meeting, but it remains unknown if Senators have altered their positions. Considering the extent of congressional criticism over the past two years, it may take President Trump more than one meeting to inspire a change of mind.

While President Erdogan and President Trump agreed in Osaka on the importance of the U.S.-Turkey alliance, the arrival of the missile system in Turkey foreshadows difficult times ahead for the strategic partnership. With Turkey’s expulsion from the F-35 program affirmed and talk of sanctions buzzing in Washington, all attention has turned to President Trump. Will he convince Congress to change course? Or, if unsuccessful, will he utilize his power as president to delay or waive sanctions? If the President chooses to risk political controversy on Turkey’s behalf, a greater question remains: how will U.S.-Turkey relations fair as a result?

Shannon Karst is a graduate student at George Washington University studying U.S. foreign policy and international security. She currently works at the SETA Foundation in Washington, DC as a research intern.