How the Armenian lobby in the U.S. helped push the Biden administration to recognize the events of 1915 in Anatolia as "genocide." 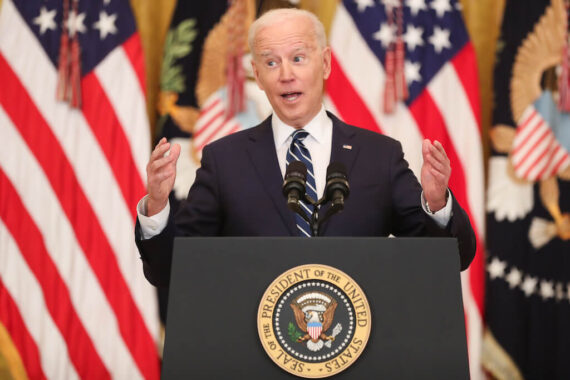 US president Joe Biden has recognized the events of 1915 in Eastern Anatolia as genocide stirring much anger in Turkey. Photo by Oliver Contreras, Epa via Anadolu Images

The U.S. covert war against NATO ally Turkey gained a new dimension when U.S. President Joe Biden used the word “genocide” for the mass deportation of Ottoman Armenian subjects in 1915. Why did Biden add another thorny issue to the bilateral relations between Washington and Ankara, which are already at a low, at a time when he wants to contain Russia’s and China’s increasing influence? How will Washington’s unilateral actions against Turkey effect that policy? And, most importantly, should Turkey consider Biden’s statement as a serious affair?

The horrific events that took place in 1915, during the last years of the Ottoman Empire, and how to identify them has been a problem between the U.S. and Turkey for more than three decades. Each year, on April 24, all eyes turn to Washington to see if the U.S. administration will declare that a “genocide” was perpetrated against Ottoman Armenians in Eastern Anatolia.

Previous U.S. administrations have not used the term genocide in formal statements amid concerns over damaging relations with Turkey, a NATO ally. But this year, President Joe Biden became the first U.S. president to recognize the horrific events in 1915 officially as a “genocide,” risking another potential fracture with Turkey. In his statement, Biden said the intention was “not to cast blame but to ensure that what happened is never repeated.” He also referred to Istanbul as “Constantinople” which also drew criticism, since the latter is a word Greeks use for Turkey’s biggest city.

VIDEO: What happened in 1915 in eastern Anatolia?

Reports in the U.S. media quoted diplomatic sources saying that Biden’s words “our aim is to not cast blame” can be understood to mean that he does not want to hold Turkey responsible.

But this is not the case…

The issue is highly sensitive. Turkey does not deny the suffering of Armenians in WWI. Turkish President Recep Tayyip Erdoğan reiterated this in a letter to the Armenian Patriarch of Turkey and to Armenia, and called once again for the formation of a joint commission of historians and academics to analyze the national archives of Turkey, Armenia, and the related countries. Unfortunately, Turkey’s calls have not been accepted by Armenia as of today.

In 2016, Kamala Harris had reaffirmed her commitment to proper recognition and a resolution for the “Armenian genocide.”

There are many ways to explain why Biden used the word “genocide.” It is clear that Vice President Kamala Harris and House Speaker Nancy Pelosi were fully committed to the recognition of that so-called genocide. For the record, we should keep in mind that Kamala Harris met with members of the Armenian National Committee of America – Western Region (ANCA-WR) as attorney general of California when her campaign for U.S. Senate kicked into high gear in 2016, where she reaffirmed her commitment to proper recognition and a resolution for the “Armenian genocide.”

It seems that Biden, too, was concerned about looking bad for failing to keep his promise to the Armenian diaspora and his Armenian voters. At the same time, the administration appears to have felt the need to side with the Armenian lobby and Armenia following Azerbaijan’s victory in Nagorno-Karabakh with the support of Turkey.

But whatever the political aims are, “genocide” is a very grave accusation and must be supported by a legal and historical consensus, rather than resulting from a politically motivated move under pressure from the Armenian diaspora.

No historical or legal basis

Genocide is a type of crime against the international community, the definition and framework of which is set by law. The crime was first defined at the international level by the 1948 UN Convention on the Prevention and Punishment of the Crime of Genocide. The convention was unanimously adopted by the UN on December 9, 1948 as General Assembly Resolution 260 and entered into force on January 12, 1951.

Until today, there is no legal decision taken by any international criminal court declaring what happened in the last years of the Ottoman Empire to the Ottoman Armenians as a genocide.

According to Article 6 of the 1948 UN Convention, for an act to constitute a crime of genocide legally, either the judiciary of the country where the alleged acts took place or an international judicial mechanism (international criminal courts or the International Court of Justice) with jurisdiction must decide on the issue.

Until today, there is no legal decision taken by any international criminal court declaring what happened in the last years of the Ottoman Empire to the Ottoman Armenians as a genocide. About 30 countries have declared the events a “genocide” based on political resolutions adopted by their parliaments, with no attribution to any legal decisions.

Given that an international judicial mechanism should decide what happened in 1915, documents, books, testimonies, and archives are the most reliable sources to base this decision on. Well-known historians like Bernard Lewis, Stanford Shaw, Heath Lowry, J.C. Hurewitz and Justin McCarthy openly stated that what happened in 1915 cannot be described as “genocide” once the archives and testimonies of the Armenians and the Ottoman Muslims are studied in detail without prejudice.

Documents and books like The Armenian Revolutionary Federation (Dashnaktsutyun) has Nothing to Do Anymore written by Hovhannes Kajaznuni, the first prime minister of Armenia, are why Armenia does not want to open its archives for research and why the Armenian diaspora prefers lobbying and narratives over academic panels and historical documents.

As a co-founder of the Dashnaktsutyun Party, Kajaznuni presented his views about what really happened in 1915 and how they were deluded by the Russians and the British, during the party’s congress held in Bucharest in 1923 as a manifesto His statements shine a spotlight on the historical background behind the Ottomans’ decision to relocate Ottoman Armenian citizens. He said, “The dream of an Armenia that spans from sea to sea is the reason why we rebelled. We are the cause of the incidents. We were duped. The relocation implemented by the Turks was an appropriate measure. We should not look for a culprit, it is us. We lived together of centuries, now we can’t even look the Turks in the face.”

These confessions caused a great uproar among the members of the Dashnaktsutyun Party and almost all the copies of Kajaznuni’s book were collected from the libraries across Europe in the late 1920s. In 1955, in New York, the book was republished in English by the Armenian Information Service, this time excluding his original words.

There are many documents about the events of 1915 that should be brought to the attention of the public on both sides. The formation of a joint committee of historians is the only just, reliable, and humane way to define what really happened. Any evaluation without a legal landmark such as Biden’s unilateral decision, will only make things worse.

What now? Legal and political possibilities

Biden’s declaration of the 1915 events as a “genocide” may likely have reflections in U.S. domestic law, giving the Armenian diaspora an opportunity to file lawsuits for reparations against Turkish companies, banks, and even individuals.

Even though U.S. State Department officials who recently spoke to Turkish media stated that “there is no intention to strip Turkey’s sovereignty to be exempt from domestic law which is regulated under the Foreign Sovereign Immunities Act,” there is always a possibility of a legal amendment under the growing pressure of the Armenian lobbyists like the ANCA.

The lines in the Los Angeles Times, a day after Biden’s announcement, are evidence that the ANCA is seeking such a development. The California newspaper wrote, “U.S. recognition of the genocide, some argue, would help survivors and their families go after what they lost by pursuing legal action in courts and adding pressure to the Turkish government to pay reparations.”

Meanwhile, on the political front, the door is left open for healing present divergences at the meeting expected to take place between President Erdoğan and President Biden at the NATO Summit in June.

But the U.S. administration must also keep in mind, if it still sees Turkey as an ally, that anti-U.S. sentiment in the Turkish public is at an all-time high. Biden’s latest statement has done nothing but increase disapproval of the U.S. that is shared across a majority of Turkish society.

The wider interests of the U.S. beyond its domestic political landscape, must still alert Washington that Turkey should not be “lost” at a time when the world is unpredictable and has a plethora of challenges. Turkey’s growing regional influence is an asset for furthering stability. Turkey can cooperate and/or contain Russia in the Middle East and Central Asia, it has strategic relationship with Azerbaijan and Ukraine, and has a role in the Afghanistan peace process, not to mention Syria and Iraq.

While the liberal order is in a decline, the safeguarding of global stability becomes more strategic. Any alternative arrangement for international cooperation must include Turkey if Biden administration is really willing to make a difference.  Turkey can be either a strategic partner or a pivotal actor. It depends on Biden.

Also Read
The Myth of Miatsum: Armenia Stuck between the Past and Reality on the Ground