Who Is in Control of Egyptian Football?

Counter-revolutionary policies of the Sisi regime in Egypt have been supported by Saudi Arabia and the UAE. Egyptian football fans are targeted by this Saudi-UAE supported witch hunt thanks to the presence and involvement of Turki Al-Sheikh in Egyptian football. 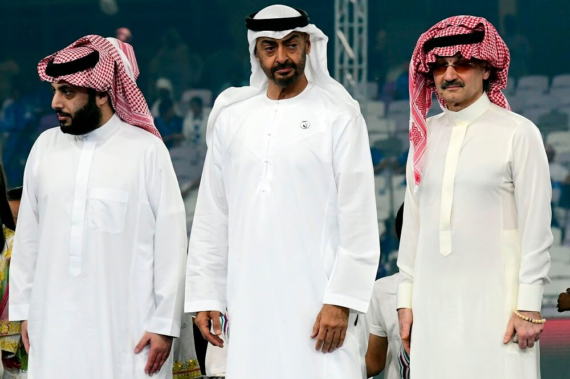 The Club Champions League, the final game of the CAF (Confederation of African Football), took place on November 27, 2020. The game was played between the two biggest Egyptian teams, Al-Ahly and Al-Zamalek in Cairo Stadium and ended by the crowning of Al-Ahly as the African champion for the 9th time. A crowd of fans of both teams would normally be expected to fill the stadium.

However, this was not the case since the Egyptian public and hardcore fans known as “Ultras” have been banned from Egyptian stadiums since 2012. This ban has been part of the anti-revolutionary policies by the military regime in Egypt. These policies especially targeted the Ultras due to their effective social mobilization capacity during the January 25 Revolution that took place in Egypt in 2011.

The political involvement of the Ultras in Egypt was not a spontaneous reaction during the January 25 Revolution. Rather, it was a process that started with the very establishment of the Ultras in 2007. The Ultras of the two clubs in Egypt, Al-Ahly and Al-Zamalek, are called “Ultras Ahlawy” and “White Knights” respectively. From their establishment, both groups condemned police brutality and the dictatorship of the Mubarak regime. They were also influential during the 2011 events, thanks to their discipline, commitment, and their overriding principle of following the orders of their leaders.

Read: Tortured and Imprisoned: Children are Unsafe in Sisi’s Egypt

In addition, their financial independence gave them a certain freedom and kept them away from any state control. When Mubarak stepped down and the military took control of the country in February 2011, the state aggression against the Ultras started to increase and was crystalized in two major massacres: Port-Said, on February 1, 2011, and the Egyptian Air Defence Stadium massacre on February 8, 2015. These two incidents were followed by mass arrests of members of both groups who were tried in the courts.

The Influence of Turki Al-Sheikh on Egyptian Football

The counterrevolutionary policies of the Egyptian state under President Abdel Fattah el-Sisi have been supported by Saudi Arabia and the United Arab Emirates as part of their anti-Arab Spring policies. The Ultras were targeted by this Saudi- and UAE-supported witch hunt that is related to the presence and position of Turki Al-Sheikh in Egypt.

Turki Al-Sheikh is a Saudi adviser of the royal court and is the current chairman of the General Authority for Entertainment in Saudi Arabia. He started to appear on the Egyptian football scene in December 2017. Since then, he was announced as the honorary president of Al-Ahly. Later on, he resigned, refused an offer to preside over Al-Zamalek, but still invested huge amounts of money in transfers for both clubs.

Turki al-Sheikh, Chairman of Saudi's General Authority for Entertainment, attends the friendly football match between Brazil and Argentina at the King Saud University stadium in the Saudi capital Riyadh on November 15, 2019. Photo by Fayez Nureldine, AFP via Getty Images

Fans who directed criticism towards Al-Sheikh have had to apologize publicly following legal actions taken against them.

Furthermore, he became involved in many disputes between the clubs and their players, and bought the Egyptian club Al-Assiouty Sport, changed its name to “Pyramids FC,” and then sold it to Emirati businessman Salem Al-Shamsi. Reports of Turki Al-Sheikh’s involvement in Egyptian sports have heavily criticized his policies and their impact on the efforts of the Saudi government under Mohammad bin Salman to influence Egyptian sports

The founders and the early members of the Ultras in Egypt are currently either imprisoned, exiled, or have preferred to disappear from the public scene following the oppression they experienced. In addition, for the past eight years sports fans in general have been banned from interacting with football clubs.

Sport fans in general have been banned from interacting with football clubs for eight years. Thus, the reactions of the new generation of football fans, in general, and Ultras, in particular, can only be observed through social media.

Read: Despite Withdrawal, Medal for Sisi Only Exposes Lack of Credibility

A general observation of social media reveals that Turki Al-Sheikh became the central topic of discussions even after his “official” withdrawal. The attitude he showed towards football fans was problematic as he took legal action against some of them and shared their names publicly on his Facebook account over claims of personal insult allegations.

His position on players such as Abdullah Al-Said and transferring him to the rival team, Al-Zamalek, or the dispute with Al-Ahly’s former captain, Hossam Ashour, and his retirement plans have been hot topics among football fans on social media networks. Al-Sheikh joined controversial Al-Zamalek chairman Mortada Mansour in his attacks and criticisms against the Ultras.

As a result, the discussions of football fans across social media became mainly concerned with Al-Sheikh’s actions. Discussions within groups of fans of one team or between rival fans focused mostly on the problems that Al-Sheikh was involved in, and his influence on both the big clubs and Egyptian football in general.

Al-Sheikh and his interventions in the policies of football clubs were used by rival fans as a sarcastic reference point and to mock each other and belittle their managerial boards. Meanwhile, various political and social events took place when Turki Al-Sheikh was the honorary president of Al-Ahly Club in Egypt and an investor in Egyptian football.

These events include calls made by former military-affiliated contractor Mohamed Ali for protests against the Egyptian regime, or for protests against more recent events such as the demolishing of unlicensed houses, carried out by the Sisi regime.. In addition, a social media campaign was launched against sexual harassment by survivors who started publicly shaming abusers and were supported by celebrities and social media influencers.

These events would have seen a huge reaction from the Ultras, both at the stadiums and on social media, had they taken place eight or nine years ago. Nonetheless, fans on social media networks merely expressed their reactions to the matches and to the actions of Turki Al-Sheikh. Al-Sheikh has already sold Pyramids FC and is currently the owner of the Andalusian club UD Almería. However, Al-Sheikh is still present and influential through his financial support to both Al-Ahly and Al-Zamalek, and his continuous engagement with different media channels and talk shows in Egyptian media.

Al-Sheikh’s presence helped the current Egyptian regime to continue to oppress the Ultras as an effective group of the January 25 Revolution and as a presence that continues to pose a threat to its existence.

Fans who dared to become involved in such political, social, or public discourse have experienced firsthand the state’s reaction towards the Ultras. Fans who directed criticism towards Al-Sheikh and the atmosphere he created in Egyptian football, have had to apologize publicly following legal actions taken against them. These actions of Al-Sheikh, alongside securitizing the Egyptian sports, managed to push football fans away from such sensitive social and political causes. It also served the Saudi-Emirate plans carried out against groups involved in the Arab Spring revolutions.

Thus, the presence of Al-Sheikh helped to immobilize fans across social media and threatened anyone who openly talked about his corrupting influence. Al-Sheikh’s presence helped the current Egyptian regime to continue to oppress the Ultras as an effective group of the January 25 Revolution and as a presence that continues to pose a threat to its existence.