Who Will Shape the Politics of Singapore?

Changes occurring in Singapore's political realm should not be evaluated alone but should be taken into consideration with regional and global developments. 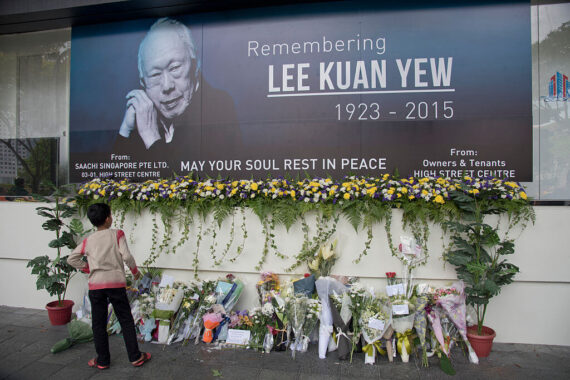 People pay respect and condolences with flowers and cards for the late Lee Kuan Yew, the founding father of Singapore. Getty Images

It is observed that there has been some modifications in Singaporean politics in recent years. This process can be traced in particular since 2011, when the Workers’ Party (WP), the main opposition party, gained a surprising success in the general elections.

Later, the death of Lee Kuan Yew, the founding father of the Republic, in 2015, initiated the replacement of the older generation with the younger one (called the fourth generation), in the Central Executive Committee in the People’s Action Party (PAP), the ruling party, and a re-shuffle of the government in 2018.

Meanwhile, a new party has been established by Dr. Than Cheng Bock, a former senior member of parliament of PAP. This initiative is quite significant in terms of creating a new opposition bloc before the next general election to take place in January 2012, or earlier.

Just after the election victory in September 2015, Prime Minister Lee Hsien Lhong announced the possible reshuffling of leading cadres within the PAP.

And the mentioned political succession was realized last year by the replacement of some aging cabinet members with a new brand of cadres called the 4th generation in order to shape the Island’s politics in the near future.

This also includes a transfer of leadership to a younger leader working with PM Lhong, who is confirmed to retire at 70, which will happen in 2021. Based on PM Lhong’s statements about handing over this role, starting from 2016, Heng Swee Keat, the incumbent Finance Minister, will take office.

On the other hand, it is yet to be seen as to whether PM Lhong would remain in charge of the country, following his later father Lee Kuan Yew’s experience after the above-mentioned hand-over.

The Malaysian opposition alliance gained power last year. This can be considered as an event that has had a significant impact on Singapore’s politics.

This political succession might have been considered as part of a regular change in the PAP, as expected in any political party. However, it should be understood with other subsequent developments that have emerged in not only the Island, but also in regional and global politics. For instance, the fact that the Malaysian opposition alliance gained power last year can be considered as an event that has had a significant impact on Singapore’s politics.

In addition, some social issues such as an aging population, wealth disparity, migration, or foreign workers, problems of social mobility, and so on, are causing discontent among the public and forcing the incumbent PAP government to be competitive and act accordingly in its politics.

The detah of Lee Kuan Yew, the founding father of the country, on 23 March, 2015, at the age of 91, was perhaps a turning point in the ongoing political developments. He was no doubt a strong voice that shaped the government and the established political regime in the city-state until the last few years of his life.

He exercised strong leadership during his tenure. And even when he retired from active political life, he continued to serve the nation by holding the post of Senior Minister, 1990-2004, and then the advisory post as Minister Mentor in the cabinets between 2005-2011.

It is no doubt that the loss of Lee Kuan Yew was a crucial turning point in the Island’s politics, since he was actively involved as the PAP’s mentor and in shaping politics in general. As a testament to its popularity, the PAP acquired nearly 70 per cent of the electorate’s votes in the general election held a couple months after his death.

In this regard, not only the younger electorate, but the increasing number of the ageing population are also considered to be change makers in the upcoming elections. In particular, the government is trying to cater the distinct demands and expectations of the ageing population, which is no doubt a new mold of the demographic structure of the Island.

The Workers’ Party and expectations

The WP, the second oldest party after the PAP, plays a leading role among the almost a dozen other opposition parties. It acquired a strategic gain by winning all 7 seats in a single constituency in the 2011 elections.

The WP could not turn this into a strategic move and gain support from the electorate for a sound victory in subsequent elections in 2015. But its success in the 2011 election can be taken into account to imagine how the political pattern could be re-shaped, starting from a single constituency.

In this regard, it is argued that the WP has significant material and ideological weaknesses in comparison to the PAP. For instance, the WP does not have any significant relationships with the labor unions and does not garner support from them, which is quite contradictory with its ideological basis. This forces the WP only to act as a check and balance against the incumbent government of the PAP.

It can be argued that this is a dilemma for the WP because its political stand needs to reach a particular electorate such as labor groups, so as to become a major power in the parliament.

The leadership change in the party from Low Thia Khiang, who held office for almost the last two decades, to Pritam Singh, in April 2018, can be regarded as the consequence of the above-mentioned obstacles of the WP.

On the other hand, it is a fact that the PAP has successfully continued its well-established alliances with the unions, which was the result of the ideological initiative of the late Prime Minister Lee Kuan Yew throughout the 1950s and 60s.

There is news about the meetings between Dr. Than and Lee Hsien Yang, the brother of the Prime Minister, which might be leading towards a new strategic move to create a larger alliance among the opposition parties.

Towards a novel political move

As seen above, the WP is the most significant opposition party in terms of its representative capacity.

There are some other political parties, though minor, which might play a crucial role in case there is going to be a lively opposition bloc under a strong leadership.

In regard to this, Dr. Than Cheng Bock’s decision to found a new political party, called the Progressive Singapore Party, is a significant development. Dr. Than, known as a senior politician, having served as a member of parliament for the PAP for 6 terms, is now a candidate in the presidential elections.

He is believed to be a source of dynamism among the opposition parties such as Singapore Democratic Party (SDP) and Democratic Progressive Party (DPP).

And though it is still too early to guess the reverberations, there is news about the meetings between Dr. Than and Lee Hsien Yang, the brother of the Prime Minister, which might be leading towards a new strategic move to create a larger alliance among the opposition parties.