Who’s who in Erdogan’s new cabinet?

President Erdogan has placed importance on bureaucratic and technical knowledge when selecting his cabinet members. The majority of his cabinet are from bureaucracy and the private sector – all which have pursued successful careers and have satisfactory knowledge and experience within their fields. 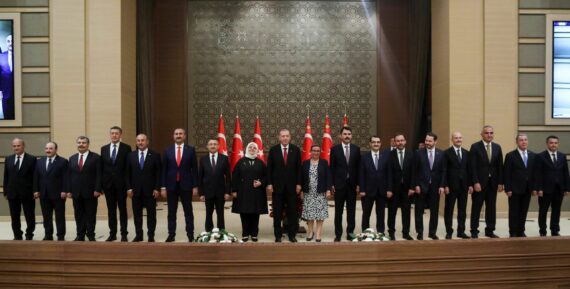 Turkey's President Recep Tayyip Erdogan (C), poses with the members of the newly presented cabinet following a news conference at the Presidential Palace in Ankara, on July 9, 2018. ADEM ALTAN/AFP/Getty Images

On Monday 9, 2018, Recep Tayyip Erdogan was sworn in as Turkey’s new president under the new system of governance. At approximately 21:30, the President announced his new cabinet – an event that Turkey was anxiously waiting for.

Under the new presidential system, there are 17 ministries – all the faces, except for four are ministers that served in the previous cabinet, are new. These names are Mevlut Cavusoglu (Foreign Minister), Suleyman Soylu (Interior Minister), Abdulhamit Gul (Justice Minister) and Berat Albayrak (former Energy and Natural Resources Minister, now acting as Treasury and Finance Minister). Another name that is familiar is Hulusi Akar. Although Akar had not served under Erdogan’s previous cabinet, he was the previous Chief of General Staff and is now acting as the National Defense Minister.

While a full detail of the individuals selected will be provided, it can be observed that President Erdogan has placed importance on bureaucratic and technical knowledge when selecting his cabinet members. The majority of his cabinet are from bureaucracy and the private sector – all which have pursued successful careers and have satisfactory knowledge and experience within their fields. An interesting point that needs to be made here is that the majority of the cabinet are literally, non-political figures who are strangers to the public.

Oktay specialized in crisis management and worked with some organizations during the 2000 economic crisis in Turkey. At the same time, he was the Business Faculty lead at Beykent University.

Between 2008-2012 Oktay moved forward in the aviation sector. He was the Deputy Director General of Strategic Planning and Development department at Turkish Airlines. From 2012-2016, Oktay was the head of AFAD – an emergency services organization directly connected to the Turkish prime ministry.

Prior to his new role, Oktay was the undersecretariat of the prime ministry.

Justice Minister Abdulhamit Gul was born in Gaziantep. Graduating from the University of Ankara’s Faculty of Law, he began his political career with the Welfare Party and proceeded with the Virtue Party. After serving in many different positions, and having worked with what can be described as the major conservative political parties in Turkey, Gul was elected as MP to Gaziantep in 2015. In the cabinet re-shuffle that occurred on July 18, 2017, Gul was appointed as Justice Minister. He has remained in the same position.

In terms of his political career, Cavusoglu was first elected as MP for Alanya in 2002, then recurrently in the 2007, 2011 and 2015 elections. He has been serving as the Foreign Minister since August 29, 2014. Some circles have suggested that the main reason why Erdogan has re-selected Cavusoglu is due to the developments that have been occurring in regards to Manbij.

Suleyman Soylu was born in 1969. After serving as the leader of the Democrat Party for a year and a half, Soylu joined the AK Party in 2012. Following the resignation of Efkan Ala, Suleyman Soylu has been the Interior Ministry since August 31, 2016. Just like Cavusoglu, commentaries have analyzed Soylu’s continuation as related to the fight against terrorism at home.

As mentioned, Huluski Akar, while a political figure due to his role as Chief of General Staff, was never a part of a political body/ party. His success in Operation Euphrates Shield, Operation Olive Branch and the continuing fight against terrorism within Turkey’s borders is the most likely reason why Erdogan has appointed him as the Defense Minister.

After completing his education in military schools in 1973, Akar served under many positions in the Turkish Armed Forces. In 2015 he was appointed as Chief of General Staff. An important event to note about Hulusi Akar is that he was taken hostage during the failed coup attempt of July 15, 2016, and was saved with an operation conducted the following day.

Ziya Selcuk was born in 1961 in Ankara. Being a professor, Selcuk continued with his academic career at Gazi University for approximately 20 years. He has written many books on areas including communication, development and counselling.

Selcuk is one of the figures that was unknown to the general public, only due to his non-existence as a political figure.

Dr. Fahrettin Koca was born in 1965 in Konya. He completed his education at Istanbul University Medicine School in 1988. After serving within many medical and health associations, in 1997, Koca established the Medipol Hospital and Medipol University.

Fatih Donmez was born in 1965 in Bilecik. In 1987 he graduated from Yildiz Technical University’s Engineering department.

Since 1994, Fatih Donmez has been working in energy-related offices in Istanbul Metropolitan Municipality. Previous to his current position, Donmez was serving under the Ministry of Energy and Natural Resources. Like many, Donmez is also a figure that has not been politically apparent.

Mustafa Varank was born in 1960 in Trabzon. After graduating from the Black Sea Technical University in 1981, Varank continued with his professional career in Istanbul as an engineer.

Murat Kurum was born in 1976 in Ankara. He graduated from civil engineering from Selcuk University in 1999. After working in many private associations, he worked under TOKI from 2005-2006.

Prior to his new role, Kurum was the head of Emlak Konut, a state-run real estate developer.

Bekir Pakdemirli was born in 1973 in Izmir. After completing his BA at Bilkent University’s School of Business Administration, he completed his masters at Baskent University and his PhD at Celal Bayar University, Economics department.

He was an entrepreneur within agricultural and automotive fields. Pakdemirli has also served under many private organizations and is a member of the Board of Directors of Turkcell, BIM and Albaraka.

Mehmet Ersoy was born in Istanbul in 1968 and is a graduate from Istanbul University. He established a travelling agency called ETS Tur.

Mehmet Muharrem Kasapoglu was born in Istanbul in 1976. He completed his BA at Marmara University’s Economics and Political Science department and his MA in Public Policy at the same university.

Prior to his new role, Kasapoglu was head of the state-owned sports betting company Spor Toto. .

Zehra Zumrut Selcuk was born in Ordu in 1979. She completed her BA in economics at Bilkent University. She pursued her doctoral studies at Michigan University and Texas University respectively.

Prior to her new role in the cabinet, Selcuk was the Ankara representative of the Women and Democracy Association (KADEM).

Berat Albayrak was born in Istanbul in 1978. He graduated from Istanbul University’s Business School and then completed his MA at New York Pace University Lubin School of Business. His doctoral thesis was in the field of finance and banking, with the subject title of “The Finance of Renewable Energy Resources.”

Prior to his new role in the cabinet, Berat Albayrak was the Minister of Energy and Natural Resources.

Ruhsar Pekcan was born in 1958. Pekcan pursued her BA and MA in the Electronics Department at Istanbul Technical University. Having worked in private associations involved in infrastructural development, Pekcan was the CEO of Karon Muhendislik San. Ve Tic. Ltd. Sti in Istanbul.

She is the one of the two women that are serving in the cabinet.

Mustafa Varank was born in Trabzon in 1976. After completing his BA in Political Science and Public Administration at ODTU in 1999, he completed his MA at Indiana University.