Why did Jordan’s King Abdullah II meet with the Islah Bloc?

The “Deal of the Century” puts the most pressure on Jordan and in turn this phenomenon is changing the Islamist space in the country which is also impacts Amman’s outlook towards Turkey and Qatar. 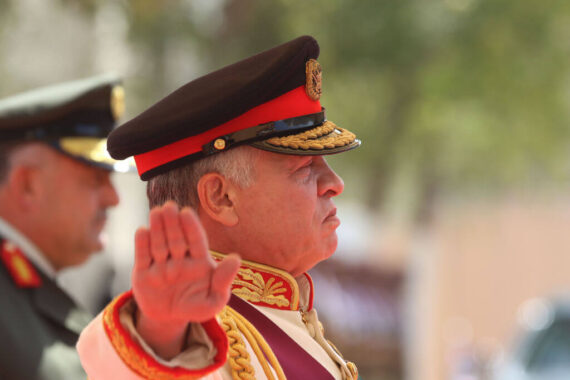 Jordan's king Abdullah II arrives at the official ceremony for the state opening of the of Jordan Parliament on October 14, 2018 in Amman, Jordan. Getty Images

Important developments are occurring in terms of how the Hashemite Kingdom of Jordan sees itself in the geo-religious landscape. On April 16, 2019, King Abdullah II of Jordan affirmed his rejection of any settlement to the Palestinian-Israeli conflict that does not take into account the interests of both Palestinians and Jordanians. The king has repeatedly called for safeguarding the Hashemite custodianship of Christian and Muslim holy sites in East Jerusalem.

During a meeting with members of the House of Representatives’ Islah bloc at Al Husseiniya Palace, King Abdullah reiterated Jordan’s unwavering position on the Palestinian cause and Jerusalem. Jordan’s leader stressed that the only solution to the Palestinian issue is the two-state solution, leading to the establishment of an independent Palestinian state on the June 1967 lines, with East Jerusalem as its capital.

It seems that the King is testing the reaction of Washington which is preparing to announce the “Century Deal” shortly after Ramadan. The King’s meeting could be a pre-emptive move by Jordan to abort the Jordanian custodianship rights of Christian and Muslim holy sites in Jerusalem in East of the holy city.

Jordan had created the state-supported version of the Muslim Brotherhood previously but because of the country’s current political environment now there is a merger.

Representatives of the parliamentary Islah Bloc in the Jordanian parliament said that the meeting revealed several political messages sent by the Jordanian monarch. The significance is that the Islah is affiliated to the Islamic Action Front (the political wing of the unlicensed Muslim Brotherhood) in the country. This link-up is directly what Amman wanted. Previously, Jordan created the state-supported version of the Muslim Brotherhood but now because of the country’s current political environment, a merger is here.

This merger is influential. The bloc member Saleh al-Armouti said that the meeting was “positive and historic” and constitutes a new phase of the relationship between the movement and the royal palace, particularly after the king had met with all parliamentary blocs in the past, except the Islamist movement.

Some Jordanians believe that the importance of such a meeting at this time stems from the issue of custodianship on the Holy Sites in East Jerusalem, the “Century Deal”, which would be announced after Ramadan, and legitimizing the Muslim Brotherhood as a player in Jordan’s political arena. Others argued that the King is trying to play all his cards with regional and international powers to save the Hashemite Custodianship of Christian and Muslim Holy Sites.

To some, the Jordanian King is playing all his cards to save the Hashemite Custodianship of Christian and Muslim Holy Sites in East Jerusalem.

Jordan—unlike Egypt, Saudi Arabia, Syria, and the United Arab Emirates (UAE)—has not designated the Muslim Brotherhood a terrorist organization, which reflects the king’s feeling that there is an ambush for both Palestinians and Jordanians that would deprive them of their right to be accountable for the holy sites in the old city of Jerusalem.

According to members of the bloc, the MPs and the king discussed the legal dispute over licensing its activities. Observers believe that this meeting is considered a new political direction for Jordan’s government to mend fences with the country’s local Muslim Brotherhood branch.

Religious and Legal Dimensions of the Hashemite Guardianship

The Hashemite trusteeship is based on religious and legal aspects. The Hashemite custodianship is proven religiously, ideologically and politically; Prophet Mohammad is the ancestor of King Abdullah. This makes Jordan and the king as the sole trusteeship of the Muslim Holy sites in the city.

The historic origins of Jordan’s sovereignty over the holy sites are dated back to 1924, when Hussein bin Ali, who was the Sharif and Emir of Mecca from 1908 and, after proclaiming the Arab Revolt against the Ottoman Empire, King of the Hejaz from 1916 to 1924, announced revolution against the Ottoman empire. Since then, East Jerusalem was under the custodianship of Jordan even during the 1948 and 1967 wars and later on due to an agreement between Jordan and Israel as Jordanian soldiers refused to surrender their sites in East Jerusalem without having assurances that East Jerusalem which is the part that includes the holy sites of Christians and Muslims is under Jordanian authority.

The Washington Declaration of July 25th of has ensured Islamic control over the Muslim Holy Sites of Jerusalem, as Israel: “respects the present role of the Hashemite Kingdom of Jordan in the Muslim Holy Shrines in Jerusalem. When negotiations on the permanent status will take place, Israel will give high priority to the Jordanian historic role in these shrines.”

The Jordanian monarch asked his fellow custodian to support him in the wake of the deal’s announcement as both kingdoms work to safeguard Jerusalem.

Telling of the current geo-religious landscape was the visit of the King of Jordan to Morocco to visit King Mohammed VI in late March 2019. The visit had to deal with custodianship issues as part of the larger landscape regarding the “Deal of the Century”. King Mohammed VI in his capacity as Chairman of Al Quds Committee of the Organization of Islamic Cooperation is to protect his custodianship of Jerusalem’s holy sites against the “Deal of the Century”. The Jordanian monarch asked his fellow custodian to support him in the wake of the deal’s announcement as both kingdoms work to safeguard Jerusalem.

Overall, the “Deal of the Century” puts the most pressure on Jordan and in turn this phenomenon is changing the Islamist space in the country which is also impacts Amman’s outlook towards Turkey and Qatar. King Abdullah sees that the American deal signals the requirement to safeguard not only Custodianship but also the increasingly Islamist interests found within the country’s parliament and other groups.

Shehab al-Makahleh (@ShehabMakahleh) is a senior advisor at Gulf State Analytics with experience as a political advisor in the United Arab Emirates and Jordan.