Since a vicious circle of conflict, unrest, and hunger is about to unfold in the Arab world, an Egyptian-Jordanian-Iraqi alliance may serve as a leverage in Middle East politics. 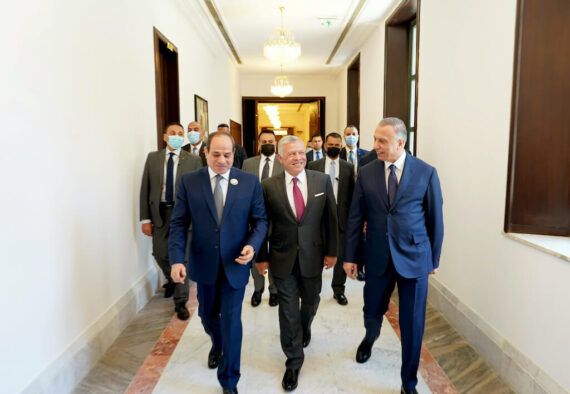 Egyptian President Abdel Fattah al-Sisi arrived in Baghdad on June 27, 2021 and was received by Iraqi President Barham Salih. This visit marks the first official visit by an Egyptian head of state to Iraq since the Gulf War in 1990. It marks the fourth in a series of trilateral summits between Egypt, Jordan, and Iraq as part of their growing regional collaboration.

The summit included King Abdullah II of Jordan, Iraqi Prime Minister Mustafa al-Kadhimi and Egypt’s president al-Sisi. The summit was held in Baghdad within the framework of a tripartite cooperation initiative, which started in Cairo in March 2019.

The Egyptian, Jordanian, and Iraqi leaders met in Baghdad for the latest summit to discuss political and economic cooperation, investments, and other developments in the Middle East. A joint statement was released at the end of the meeting.

The statement highlighted possible ways of cooperation in the fields of energy, trade, and security. The talks also covered regional issues including the Israeli-Palestinian conflict, the Syria crisis, and the war in Yemen. The leaders called for restoring stability in Libya and Yemen.

Al-Sisi emphasized Egypt’s respect and support for Iraq’s territorial unity. He shared Egypt’s intention to cooperate with Iraq within the framework of economic integration and strategic cooperation. Al-Sisi stated Egypt’s desire to increase communication between cultural, educational, and religious institutions in both countries.

Similarly, Iraqi President Barham Salih tweeted, “Our deep-rooted historical relations would be a starting point for a promising future for our peoples and the youths. It is a powerful message amid formidable challenges in the region. Iraq’s recovery will pave the way for a regional integrated system, based on contending extremism, respecting sovereignty, and economic partnerships.”

Along the same lines, Iraqi Prime Minister Mustafa al-Kadhimi  stated, “We are keen on continuing this effort and developing relations to build joint ventures serving everyone. We try to crystalize a mechanism for tripartite cooperation, and dedicate our efforts and capabilities to keep this level of cooperation.”

Read: Meetings Between Iraq, Egypt, and Jordan will Amount to Little

Egyptian presidential spokesperson Bassam Rady stated, “The new round of talks builds on what has been achieved during the previous three summits, evaluates developments in various cooperation fields, and follows up on projects being implemented as part of efforts aiming to support and deepen historical ties between the three countries. We are trying to crystalize political consultation over means to counter challenges facing the Arab world and the Middle East.”

The latest round is the fourth summit held between the three countries. The first summit was held in Cairo in March 2019 and a joint statement highlighted major areas for cooperation following the summit. The three countries’ rulers acknowledged the importance of their strategic and economic cooperation.

The second summit took place in New York in September 2019, during which the three leaders stressed their full support for the Palestinian cause, which is a rallying point for the Muslim world, and that it was Palestinians’ right to enjoy legitimate rights including an independent state with East Jerusalem as its capital. This was in line with the Arab Peace Initiative of 2002 and international agreements.

Talks among the three leaders urged regional powers to face and oppose any state or entity funding or supporting terrorism in the region. Full support was declared for Iraqi efforts to rebuild the state and help displaced people after their towns were captured by the ISIS (Daesh) terrorist group.

In 2020, a one-day summit in Amman covered trade, investments, and economic cooperation, along with other regional developments. The summit was seen as an attempt to build a regional alliance to neutralize Iranian influence in Iraq, especially after accusations of Iranian intervention in Iraqi internal affairs.

The third summit discussed joint security issues and food security in the region. King Abdullah II stressed the importance of the meeting, considering the exceptional circumstances faced by both the region and the world. He pointed especially to food security, claiming that it would be one of biggest challenges in 2021 and that it would require uniting efforts to find common solutions.

The latest and fourth summit comes at a time when Egypt could face a possible draught. Al-Sisi has already been trying to form alliances to face Ethiopia’s plans on the Nile. In May 2021, Egypt and Sudan held a joint land, sea, and air forces maneuver called “Guardians of the Nile” in Sudan’s Um Siyala region. In line with the spirit of the emerging alliance, Jordan and Iraq supported Egypt in its dispute with Ethiopia over the Grand Ethiopian Renaissance Dam (GERD).

Given their ties to the Gulf countries and other regional and international actors as well as the current alarming developments indicating that a vicious circle of conflict, unrest, and hunger is about to unfold in the Arab world, an Egyptian-Jordanian-Iraqi alliance may serve as a leverage in Middle East politics.