From the moment the Mosul operation started, multiple officials from the European Union made statements expressing their concern for European members of DAESH returning home. 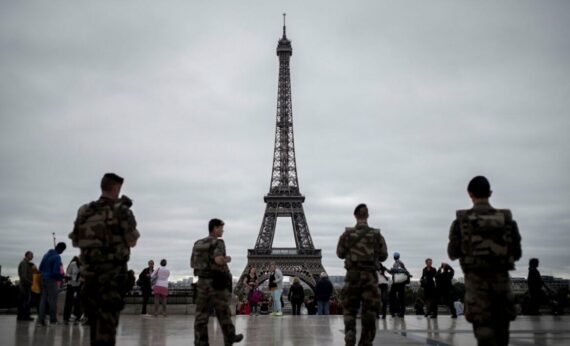 From the moment the Mosul operation started, multiple officials from the European Union made statements expressing their concern for European members of DAESH returning home. While all the major players tried to influence the plan for the Mosul offensive and have a say in the aftermath of the collapse of DAESH, the EU’s only concern has been the security of its borders. The passive reaction of the EU to an operation of this magnitude is indicative of its security strategy being doomed to narrow down further. If the EU cannot agree on its strategic goals beyond the most basic issue of securing its borders, why should Middle Eastern governments pay attention to its policy towards them?

SecurityBy Serhan Afacan
Compared to Russia and the US, Europe is effected more by the civil war in Syria in terms of a spill-over of terrorism, and major waves of refugees fleeing from Assad and DAESH brutality. The humanitarian crisis surrounding refugees created rifts between the member states and shook the foundations of the already reeling union. Agitation and fear-mongering through manipulation of the crisis gave rise to a far right, and created dynamics which might even cause the Schengen regime to collapse in the future. Despite the fact that the crisis has proved to be producing an existential threat to the EU, the union has not been able to show confidence and activity in the security affairs of the region, as other major players have. Then why has the EU – which is the strongest economy when its members’ resources are combined – been virtually absent from the debate? Why can’t Europe show strategic presence in the region when all other major players are busy trying to get a foothold in Mosul, or leave a more favourable administration there when the dust settles?The answer has less to do with the EU’s willingness than its ability to pool the military might of its members.

The EU wants to become a more robust, more influential strategic player, as is clearly stated in the European Security Strategy. It was also pointed out in High Representative Federica Mogherini’s statement on the aim of the EU Global Strategy, which included “making full use of our potential”. As Mogherini indicated, it has always been about putting a strong will in front of the huge potential of the EU. Yet, that is exactly where the problem begins. That sort of a pooling of resources for military optimization and strategic single-mindedness requires a full-fledged strategic body with actual authority to make decisions and implement them. The EU wants to go beyond the civilian role it has in every crisis, yet it is constrained by the typical structural limits imposed on any international institution: the diverse interests of member states. It has a weak decision-making mechanism and even weaker enforcement powers. The EU is not a state, it is only a framework organization where members push their interests and drag their feet when the matter is not their primary concern. In such a situation, power projection seems but a dream for the EU. It can only hold on to its normative-civilian power and make a presence in secondary issues.

The EU wants to go beyond the civilian role it has in every crisis, yet it is constrained by the typical structural limits.

The Common Security and Defense Policy (CSDP) of the EU, which was formulated after the Saint-Malo conference in 1998, gradually grew through a series of declarations and took its final shape with the Lisbon Treaty. CSDP was designed as a response to the new security outlook emerging after the Cold War and to a (perceived) loss of necessity and influence of NATO. From 1999 onwards there have been many summits attended by high-level officials from member countries, and many common security programs were formulated, along with their monitoring bodies, but the payoff has been too little. Notwithstanding the remarkable bureaucratic effort poured in, the result has been frustrating. So far, member states have not been willing to commit fully to the means for achieving a global role for the EU. Perpetual meetings, documents produced and agreements on paper serve to develop the EU’s strategic identity in declaratory terms, but its insufficient implementation reveals the immaturity and improbability of the project.

The EU’s method of trying to develop into a strategic actor has been to build certain consultation and cooperation mechanisms. Yet, these measures ensure neither developing a strategic vision, nor being able to implement it. It is true that the EU has the material capacity to become a strategic actor, but capacity alone does not guarantee strategic actorship. Without political will, strategy cannot be determined and pursued. Then again, ontological problems surrounding an international institution such as the EU would not allow it to harmonize the strategic behavior of its constituting member states, which have different levels of interest on any given issue.

The Libya crisis in 2011 was a typical example where interests and attention of member states did not overlap, and where they produced conflicting responses. As a European diplomat has put it “CFSP died in Libya- we just have to pick a sand dune under which we can bury it”. Take Berlusconi’s statement that he did not call Gaddafi during the revolt for he did not want to disturb him. This was clearly at odds with the harsh diplomatic wording agreed upon by European institutions, but he as a national leader had to take Italian economic relations with Libya into consideration. German abstention from vote on Libya in the UNSC (probably because of the upcoming election) was another incident where the EU’s powerlessness was revealed. It was demonstrated that the concerns of the EU do not trump national concerns and national interests. A weak commitment to joint decision-making kept member nations from binding together, to put their differences aside, and act in concert.

In every major crisis the EU has aspired to intervene in, there have been multidimensional disagreements among the member states, which paralyzed the organization.

The EU has always been very vocal about DAESH activity in Syria and Iraq in terms of condemnation of terror. Moreover, member states, unilaterally or with NATO, conduct operations against the terror group. Yet, a serious evaluation of the strategic aspect of the issue, let alone an operation orchestrated under the umbrella of the EU, has always been unthinkable. In every major crisis the EU has aspired to intervene in, there have been multidimensional disagreements among the member states, which paralyzed the organization. Thus, using coercive diplomacy and demonstrations of military muscle have been more difficult for the EU than soft measures such as providing humanitarian aid or imposing travel bans. This indicates a fundamental trend in efforts to create a common foreign and security policy for Europe: being able to agree only on the lowest common denominator.

States still are the highest authority in international affairs. And their main concern is always security. This is one area where they would not lend their sovereignty to another body without putting up a fight. This is exactly why states would go to war in the past, and why they would do the same now.  They might choose to seek temporary alliances against common threats, yet they should be able to feel that they are still in control. Delegating their existential function willingly is not an option. This can only be done by an imperial expansion. The EU, as we know it, is not that sort of an imperial project. If it wants to become an empire, it should better be ready to get its hands dirty and conquer European capitals one by one. The question is: with which army?