Naked power rather than elemental morality is allowed to dominate the discourse. In the background is the bankruptcy of liberal Zionism. 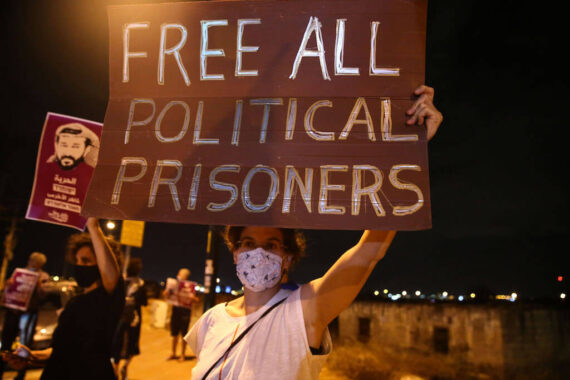 A group of protesters take part in a demonstration demanding the release of Palestinian prisoner in Israeli jail Maher Al-Akhras, who was then on a hunger strike for 100 days, in front of Kaplan Hospital in Rehovot, Israel on November 03, 2020. Photo by Mostafa Alkharouf, Anadolu Images

Ever since visiting Belfast a year ago I have been struck by how the Irish revolutionaries, despite these vast differences in circumstances and goals, regard their struggle as being reproduced in its essential character by the Palestinian struggle, and have a robust solidarity movement that regards Palestinian freedom as one of the incomplete aspects of their own struggle. The wall murals in the Catholic neighborhoods of Belfast exhibited these affinities, recognizing that oppression is not confined within the sovereign space of nations, but is a transnational reality. Solidarity and opposition express an unarticulated global humanism. While the Palestinian challenge may be more epic in quality, the Irish struggle was also waged as a matter of life and death, and even more fundamentally, as an insistence that humiliation and indignity were unendurable conditions that produced and justified martyrdom.

Among the great differences in these two national narratives that form the background of these separate renderings of the hunger strikes concerns the impacts of the international context, and especially the role of the United States. With regard to Ireland, American public and even elite opinion was strongly supportive of Catholic resistance in Northern Ireland, and the U.S. mediational role was exercised with in an impressive spirit of neutrality. With respect to Israel, the U.S. pretends to play a similar role as intermediary or ‘honest broker,’ yet with zero credibility. It should surprise no objective observer that these diplomatic maneuvers produced only frustration and disappointment for the Palestinians, in part, due to Washington’s unabashed and unconditional material and diplomatic partisanship, including siding with Israel even when it flagrantly violates international law or repudiates the UN consensus on the contours of a just peace.

The media treatment of the two struggles reinforced this disparity. The Irish hunger strikes were given generally sympathetic prominence in mainstream media outlets, with Bobby Sands’ name and martyrdom known and respected throughout the world. In contrast, outside of Palestinian circles only those most engaged activists in solidarity efforts are even aware that lengthy Palestinian hunger strikes have repeatedly occurred in Israeli prisons over the last several decades often involving near death experiences.

This denial of international coverage to such nonviolent resistance acts helps reinforce Israeli oppression and uphold the Israeli anti-terrorist narrative, and should be viewed as a kind of complicity. Naked power rather than elemental morality is allowed to dominate the discourse. In the background is the bankruptcy of liberal Zionism. For many years, leading liberal journalists, such as Tom Friedman were counseling the Palestinians that if they gave up violence, and appealed to Israeli conscience by having recourse to nonviolent forms of resistance, their political grievances would be addressed. Palestinians responsively launched the first intifada in 1987, and soon realized that those meddlesome liberal establishment well-wishers in the West were quickly muted as soon as Israel responded violently, seeking to crush this most impressive nonviolent and spontaneous mobilization of the Palestinian people.

Silence about Palestinian hunger strikes reduces the global impact of these expressions of desperation, which makes this publication of additional significance. It exposes readers to a series of separate stories of heroism under intolerable conditions of Irish and Palestinian imprisonment. This collection also offers a corrective to the virtual media blackout in the West that denies coverage to Palestinian resistance including even, as with hunger strikes, when resistance turns away from violence, and expresses a desperate last resort. Again, the contrasting international media binge coverage of the Irish hunger strikes definitely contributed to the liberating Irish diplomatic breakthrough that might otherwise not have occurred as soon as it did.

Gazan children light candles in support of Palestinian hunger striker Maher al-Akhras, who has been on a hunger strike for 84 days since his arrest by Israel in late July, on October 18, 2020 in Gaza City, Gaza. Photo by Mustafa Hassona, Anadolu Images

We notice in the experiences of Irish and Palestinian hunger strikers, that the Irish contributions situate their recourse to hunger strikes protesting prison conditions more explicitly in the wider struggle of the Irish Republican Army (IRA), while Palestinians stories tell more graphically of the agonies of prolonged imprisonment in Israeli prisons. Our attention is drawn to the denial of minimal international standards of treatment, including failures of medical treatment, bad food quality, denial of family visits, inadequate exercise, and sadistic prison responses ranging from force-feeding to putting tantalizing foods in prison cells. Yet both Irish and Palestinian testimonies emanate from the same source, how to respond to the desperation felt by intolerable abuse in conditions of imprisonment, and yet carry on the wider struggle for freedom and rights that landed them in prison.

Read: Arab Emancipation and the Liberation of Palestine

Reading their harrowing statements of broken families and broken hearts, we should not be deceived into thinking that we are reading only about events in the past. There are currently about 4,500 Palestinian prisoners, including 350 imprisoned under ‘administrative detention’ provisions copied from the British Mandate colonialist administration of Palestine, under which Palestinian activists and suspects can be jailed indefinitely without any specific charges or even a show of some evidence of wrongdoing. Many of the individual hunger strikes take this dire step of a prolonged hunger strike to protest against the acute and arbitrary injustices associated with administrative detention, which appears to be a technique used by Israel to demoralize the Palestine people to an extent that makes their resistance seem futile.

As I write, Maher Al-Akhras was close to death in an Israeli prison, having mounted a hunger strike for an incredible period of more than 103 days to protest administrative detention, and yet hardly anyone outside of Palestine and the Israeli Prison Service knows about it. Al-Akhras words while teetering on the brink of death encapsulate the common core of these unforgettable shared stories: my hunger strike “is in defense of Palestinian prisoners and of my people who are suffering from the occupation and my victory in the strike is a victory for the prisoners and my Palestinian people.” In other words, although such an extreme act of self-sacrifice, while being intensely individual, is above all an expression of solidarity with others locked within the prison walls but at the same time often the only form of resistance available to an imprisoned political militant. Such a commitment has its concrete demands relating to prison conditions, but it should also be understood as a metaphor encouraging a greater commitment by all of us, wherever situated, to the struggle that needs to be sustained until victory by those on the outside who are daily subjugated to the policies and practices of the oppressor state.

These stories and the publication of their ordeal is a global solidarity initiative supportive of the Palestinian struggle. The suffering and rightlessness of the Palestinian people has gone on far too long. We now know that the UN and traditional diplomacy have failed to achieve a just solution. Given these circumstances, it becomes clear that only the people of the world possess the will and potentially the capabilities, to bring justice to Palestine. It is an opportunity and responsibility posing a challenge to all us. We need to find what ways are available to support those brave and dedicated Palestinians who have paid for so long the price of resisting Israeli oppression.

Palestinian and Irish hunger strikers deserve the last word here. Mohammed Al-Qeeq says this: “It is not just about my freedom, but rather the freedom of every soul who curses the injustice as I do.” From Mohamad Alian these words: “In our minds the prison became our cemetery.” And from Pat Sheehan this assessment of the hunger strikes: “It was, and remains, one of the most defining and momentous periods in Irish history.” Finally, Hassan Safadi: “The look on the faces of the Zionist officers who wanted me dead, will never leave me, but I stared right back at them.”

This article will be published as part of the forthcoming book Shared Struggle: Stories of Palestinian and Irish Hunger Strikers and it was exclusively submitted to Politics Today.

Richard Anderson Falk is Professor Emeritus of International Law at Princeton University and the former UNHRC Special Rapporteur on the situation of human rights in the occupied Palestinian territories.