If the referendum on the presidential system in Turkey was a close call for “no,” for instance with 50.1% of the total votes, no one in this world would question its legitimacy. It would have been deemed as a tremendous victory of the anti-Erdoğan wing. It didn’t come to pass and the bill passed the referendum with 51.4%. Then, it must be Erdoğan’s triumph! 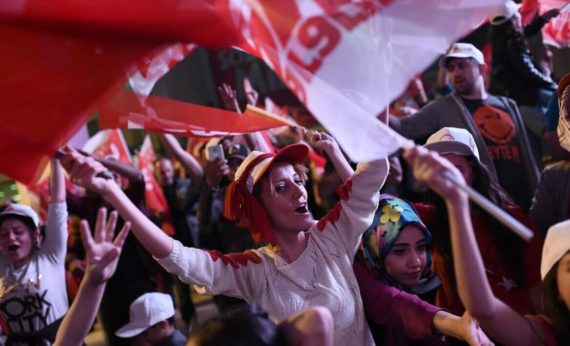 If the referendum on the presidential system in Turkey was a close call for “no,” for instance with 50.1% of the total votes, no one in this world would question its legitimacy. It would have been deemed as a tremendous victory of the anti-Erdoğan wing. It didn’t come to pass and the bill passed the referendum with 51.4%. Then, it must be Erdoğan’s triumph! President Erdoğan received the public support by acquiring 1,300,000 more votes than “no” in a referendum which was attended by 86.4% of the eligible voters. Kurdish votes showing 10-20% increase in certain cities played an important role in Erdoğan’s victory,  who has been at the helm of the government for 15 years, first as the prime minister and then as the president.

A Turkey which is surrounded by wars, hosts 2,500,000 Syrian refugees, has been targeted by both Daesh and the PKK, recently overcame a coup attempt on July 15 Gülenist infiltrators instructed by Fetullah Gülen who tried to move the country into an unprecedented chaos. Considering the reactions of especially the US universities and think-tanks, along with some Europeans ones, there is a president who is being condemned for “surviving the coup attempt.”

A president who has been more eager than his predecessors in making Turkey a full member of the EU, who has recognized the Kurdish problem and commenced the reconciliation process, who has realized education reforms for thousands of women that were forcibly thrown out by the police and forced to leave their schools just because they were wearing headscarves, and who extended his condolences to Armenians on April 24 and asked for an international commission to research what has transpired during 1915 incidents… A president who embraced the doorkeeper of the hotel he was staying in Brussels, along with the German Chancellor Schröder, who calls and talks with his childhood friends, who has earned the love and interest of the people… The most significant political leader since Atatürk.

It has become ambiguous when it did happen; however, the said president started to be compared to the cruelest man of the last century, Hitler, deemed as a dictator and alleged for massacring Kurds with an elaborate perception management that was devised by the West. In a short time the anti-Erdoğan club became quite cosmopolitan: even Daesh leader Abu Bakr al-Baghdadi, PKK, Gülen and his henchmen became the members of it. A fabulous cosmopolitan coalition of opposition! It should be mentioned that this coalition inevitably brought quite a support to Erdoğan and affected the result of referendum in a positive way.

Talking about Turkey, there are a few members of the opposition who voted “no” and constantly criticize as they want the system to become more democratic and have a robust judicial system. Nevertheless, whatever be the discussion, the “no” movement has always been spearheaded by the main opposition party CHP which comes from a Kemalist tradition. Justice and Development Party (AK Party) which has been governing Turkey for 15 years, has proposed numerous proposals about changing the 1982 constitution that was implemented by the junta.

The main opposition party opposed all of these proposals. This wasn’t surprising, as this is the nature of the Kemalist opposition parties. However, what is surprising is that the opposition party has never proposed a change or an alternative to the 1982 constitution, the same constitution that the all people in Turkey unanimously want to change. Let alone preparing a proposal that could worry AK Party, they haven’t even scribbled a draft of a constitution. Indeed, for 15 years AK Party and its leader Tayyip Erdoğan have been always challenging their own records in elections and broke them with unprecedented figures.

Erdoğan and his party that don’t have to worry about a legitimate opposition have overcome numerous illegitimate attempts aiming to depose them. The referendum was held under the conditions of the state of emergency that was declared right after the July 15 coup attempt. The subject matter was a change in the system of government; however, this wasn’t being voted in the referendum. It was between those who are against Erdoğan, both in Turkey and the world, and those who stood with Erdoğan.

Despite the campaigning since February, almost none of the voters regardless of their point of view are aware of either the so-called parliamentary system that grants excessive authority to the president or the presidential system which is different than the existing system. Among those who are aware, the objections of the main opposition party’s voters were not taken much into consideration as they refrained from criticizing the existing odd system and, moreover, as they were the ones that made it stranger. On the other hand, even though the AK Party voters were concerned about certain things, the “yes” won because of the trust in Erdoğan.

Nationalist Movement Party (MHP) which allied with AK Party for the referendum failed to garner the expected support. However, the Kurdish votes played a decisive role in the referendum by increasing support for “yes” in 14 cities located in Eastern and Southeastern Anatolia. Considering the vote AK Party garnered in November 1 elections in 2015, there is a varying increase between 10% and 20% in cities in Eastern and Southeastern Anatolia. The concerns for security, believing Erdoğan will resolve issues of the region and the reaction against PKK’s trench and urban warfare contributed to the victory. Moreover, there were those who voted “yes” as they believed that 1982 constitution is indefensible and it is impossible to resolve the Kurdish problem with the existing parliamentary system. For this reason, Erdoğan was able to increase its votes in Diyarbakır from 22.2% to 32.43%, in Batman from 30% to 36.48%, in Mardin from 30% to 40.96%, in Siirt from 40% to 48.1%, in Şırnak from 13% to 28.41%, and in Şanlıurfa from 67.8% to 70.82%.

As a result, it could be said that Erdoğan who is the indubitably the most prominent political figure of Turkey for 15 years has received less votes than his potential. However, the precedents of Turkish political history and sociology, along with the experience, show that Erdoğan will be able to maintain his government. Even if the transition to presidential system wasn’t realized, he still would be a powerful president due to the provisions of the constitution, along with being elected president in the first round with 51.8% of the votes. He himself was powerful before; now, his seat is also powerful.

A small portion of the AK Party voters abstained from voting “yes” not because of a concern about Erdoğan, but because they weren’t sure of the answer to the following question: “what will happen after Erdoğan?” Erdoğan, who will become the leader of his party due to the constitutional change, will probably take some steps that will answers the expectations and concerns of his voters, while also taking the Kurdish voters’ support into consideration. It is also highly probable that the Peoples’ Democratic Party (HDP) which is perceived as the only representative of Kurdish politics by the international community will face new rivaling competitors in the region, beside their only rival AK Party.