It should be underlined that the U.S. administration’s statements of democratization in the Middle East do not reflect reality. Rather, Washington is currently the largest obstacle for democratic governments in the region. 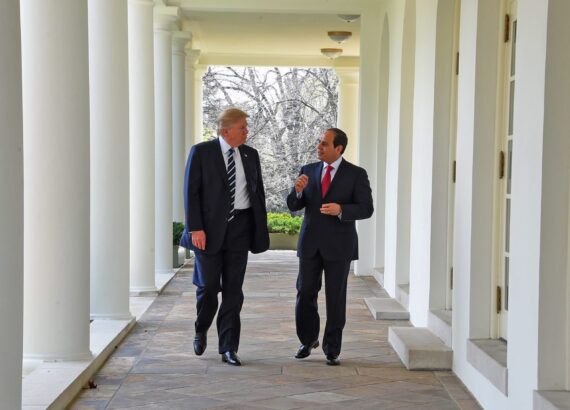 On 10 September, U.S. Secretary of State Mike Pompeo confirmed that Washington has released $1.2 billion military aid to Egypt. The aid package includes $1 billion for the budget of fiscal year 2018 and $195 million, which was originally allocated for the previous fiscal year. The U.S. administration had decided to suspend the transfer of the $195 million due to the human rights records of the Sisi regime in Egypt. However, increasing cooperation between the two countries led Washington to eventually release this aid.

It was surprising for many that the U.S. government’s decision came a day after an Egyptian court sentenced 75 people to death, including a senior member of the Muslim Brotherhood Mohamed Beltagy, the Deputy Head of the Freedom and Justice Party Essam al-Erian, Salafi preacher Safwat Hegazy, former youth minister Osama Yassin and al-Jamaa al-Islamiyya leader Tarek al-Zumer. The court also sentenced the Muslim Brotherhood’s supreme leader, Mohammed Badie, to life in prison and the son of former President Mohammad Morsi, Osama Morsi, to 10 years in prison. A total of 739 people were charged after their supposed responsibility during the dispersal of Rabaa Square protests. Many international human rights organizations and civil society groups criticize the Sisi regime for its unjust treatment of the civilian opposition.

The U.S. government however, falls short of criticizing the Egyptian regime on its human rights record and continues to provide military assistance. This was reflected in the recent statement released by the State Department, in which the Trump administration emphasized that, “Cairo is a vital partner in the regional politics of Washington and that cooperation between the two countries in security will continue.”

There are three main dynamics for Egypt’s strategic role in the U.S. foreign policy regarding the Middle East. The first reason is ultimately the security of Israel. Traditionally, the most important element in ensuring Israel’s security – which is the main determinant of U.S. policy in the Middle East – is the existence of a government in Egypt that is loyal to the U.S. A government in Cairo that does not cause problems for Israel has always been a key factor for Washington and Tel-Aviv. This was the case during the periods of Anwar Sadat and Hosni Mubarak.

The second dynamic is forcing the Egyptian regime to follow a foreign policy pattern, which is in line with the priorities of the U.S. The U.S. has aimed to control Egypt’s regional and international policy via various instruments such as financial aid, military assistance, intelligence sharing, and diplomatic support.

Finally, as one of the most influential Muslim countries, Egypt is of great importance for the U.S. in regards to its political agenda in the Middle East. By keeping Egypt under control, Washington aims to strengthen its hand in confronting other regional actors such as Russia, Iran, and to some extent, Turkey. In this regard, the U.S. is thus able to prevent Egypt from forming a close relationship with these actors, which would otherwise form a coalition against Washington.

U.S. policy towards Egypt has been in line with these dynamics in the past years, particularly since 2011. Washington did not support the presidency of Mohammad Morsi – an individual that had been elected in the first free and democratic elections the country held in decades. The main reason for Washington’s attitude was Morsi’s affiliation with the moderate Islamic civil society organization, the Muslim Brotherhood. Thus, the U.S. was quick to support the military coup of July 3, 2013, which toppled the Morsi government. U.S. support for the post-coup Sisi regime was evident in many regards. This became much clearer after the election of Donald Trump in January 2017. During the Trump era, relations between the two countries transformed into a strategic alliance.

Despite the fact that thousands of civilians oppose the military coup in Egypt, the U.S. administration continues to support the Sisi regime. Washington also ignores the Sisi regime’s violations of human rights, pressure on civil society, and the repression on the freedom of expression. There is no doubt that the U.S. clearly ignores democratic values and is continuing its support for a repressive regime. This attitude of the U.S. only encourages other repressive regimes in the region and prevents the emergence of democratic political structures throughout the Middle East. For this reason, it should be underlined that the U.S. administration’s statements of democratization in the Middle East do not reflect reality. Rather, Washington is currently the largest obstacle for democratic governments in the region.