Why Turkey Will Continue to Honor Morsi's Legacy

Morsi’s legacy will always be remembered and kept alive in Turkey. The democratic struggle of the Egyptian people will receive never-ending support from Turkish people who resect democratic values, human rights and freedoms. 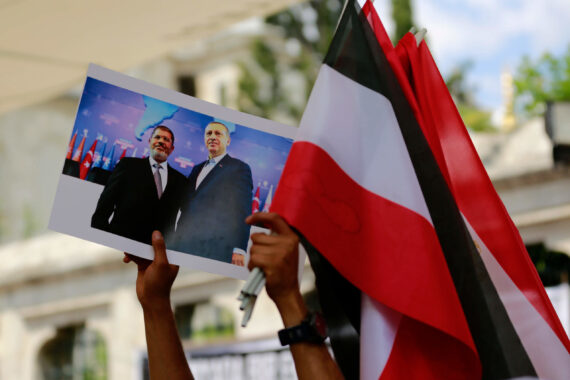 A person holds up an image of former President of Egypt Mohamed Morsi with President of Turkey, Recep Tayyip Erdogan and Egyptian flags at the funeral prayer in absentia for Mohamed Morsi at Fatih Mosque in Istanbul, Turkey on June 18, 2019. Anadolu Agency

The sudden death of Egypt’s first and only democratically elected president, Mohamed Morsi, caused shock waves in Turkey and across the Muslim world. The main reason for this was due to the fact that Morsi was a symbolic figure in Egypt’s popular uprising, which toppled a decades-long oppressive regime and aimed for a democratic and prosperous country. This has been a dream not only for Egyptians, but for millions of Arabs who suffer from oppressive regimes across the region. With years-long struggle for democratic rights, Turkish people felt sympathy for Egyptians, particularly for its leader Morsi, and supported the struggle led by him. Likewise, Turkey’s ruling AK Party also supported the success of Egypt’s political transformation led by the Muslim Brotherhood – the most organized civil society movement in the Middle East.

There was also a strong reaction in Turkey when Morsi was toppled by a military coup on July 3, 2013, led by the then Defence Minister, Abdel Fattah Al-Sisi. With its infamous military intervention experience during its democratization process, Turkey was the harshest critic of the military coup in Egypt- both at the political and social level. In addition, the Turkish public and political elites showed solidarity with Egypt’s popular movements, particularly the Muslim Brotherhood, which was subjected to an unprecedented deprivation of basic rights and human rights violations by the military junta in the country. This feeling of sympathy and solidarity has been alive since the first day of the military coup in Egypt and Turkey’s popular support for Mohamed Morsi and the Muslim Brotherhood continued.

With years-long struggle for democratic rights, Turkish people felt sympathy for Egyptians, particularly for its leader Morsi, and supported the struggle led by him.

For this very reason, regardless of ideological differences among society, Morsi’s sudden death has made a huge and upsetting impact in Turkey. This is mainly because of the fact that with its Muslim identity and strong belief in democratic values, Turkish people felt sympathy with their fellow brothers in Egypt, who struggled for their democratic rights at the hand of an oppressive regime. That is why social and political actors in Turkey supported Egypt’s historic revolutionary uprising in 2011 and welcomed the election of Mohamed Morsi as the first civilian president of the country. It is widely believed in Turkey that Morsi and the Muslim Brotherhood movement would be a transforming power in the Egyptian political landscape and lead the country to become a democratic one. Therefore, the Turkish public consider the death of Mohamed Morsi as the symbol of that struggle.

It is also believed that Morsi’s removal from power in 2013 was not directly related to his leadership, but rather related to the concerns of other regional and international actors. Especially in terms of their opinions on the future status of the Muslim Brotherhood in the greater Middle East. Regional autocratic regimes consider the Muslim Brotherhood as the most serious threat that would initiate a region wide democratization agenda. In addition, the institutionalization of the Muslim Brotherhood’s political leadership in Egypt was seen primarily as a threat to Israel’s security as well as the interests of Western powers.

The death of Morsi is a big damage to the revolutionary struggle in Egypt. Morsi was unlawfully kept in prison under harsh conditions and without the medical treatment he required.

Morsi’s close relationship with Turkey’s strong leader, Recep Tayyip Erdogan, was also another dynamic that fed such concerns of these actors, as they are also uncomfortable with Turkey’s increasing influence in the region. The possibility of Turkey’s formation of a powerful alliance with Egypt under the Morsi administration was one of the turning points for these actors and led them to step up their anti-Muslim Brotherhood agenda. While supporting the fall of the Morsi administration in Egypt, countries that held counter-revolutionary approaches towards the Arab revolutions also followed policies to limit Turkey’s increasing influence. As a result, the Turkish leadership and public considered these attacks on Morsi as attacks on Turkey’s interests and national security. Thus, it can be argued that these unjust and hostile attitudes of regional and international actors on the Muslim Brotherhood leadership and Turkish government caused strong solidarity in Turkey towards the Morsi administration.

The illegal detention and unlawful trial of Morsi and his followers have been considered a major injustice by the Turkish public, which is traditionally respectful for democratic values, human rights and the rule of law. It was widely believed that the charges directed against Muslim Brotherhood members and Morsi were politically motivated. The AK party, which has struggled for years for a democratic transition in Turkey, has shown the strongest reaction to the Sisi regime’s violent pressures on Muslim Brotherhood members, who have only peacefully sought their democratic rights. Turkish people considered this struggle as a historic moment that can transform the political landscape in the Middle East and therefore Morsi’s death was perceived as the greatest loss of this democratic struggle. It should be noted that in the eyes of millions of Turkish people, Morsi and the Muslim Brotherhood was a real hope for a regional transformation that could eventually benefit Turkey’s regional policies.

Morsi’s legacy will always be remembered and kept alive in Turkey.

The death of Morsi can be interpreted as the greatest damage to the revolutionary struggle in Egypt. Morsi was unlawfully kept in prison under harsh conditions and without the medical treatment he required. Despite the heavy pressure and policies of the Sisi regime, Morsi and the Muslim Brotherhood stuck to peaceful protests in order to prevent the country to slide into a violent civil war. However, counter-revolutionary actors aimed to exclude the Muslim Brotherhood from political and social life in the country and followed a brutal policy towards the organization. The trial and illegal detention of Mohamed Morsi and thousands of other Muslim Brotherhood members could be seen under this policy, which eventually led to the death of Egypt’s first and only democratically elected president.

This honourable struggle gave Morsi a symbolic status in Egypt’s democratization experience, not only inside the country but also across the Islamic world. As explained, Morsi’s story is widely respect in Turkey, a country that has lived through years of democratic struggle. Therefore, Morsi’s legacy will always be remembered and kept alive in Turkey. The democratic struggle of the Egyptian people will receive never-ending support from Turkish people who resect democratic values, human rights and freedoms.