The most important subject for the Eastern Mediterranean today is the derivation of economic benefit from the resources of the region. Developments such as the discovery of new resources and increases in the natural gas potential of the basin are of course important, but without a market-ready transfer route built it is obvious that these countries will not have an effective role in ensuring their energy supply security. 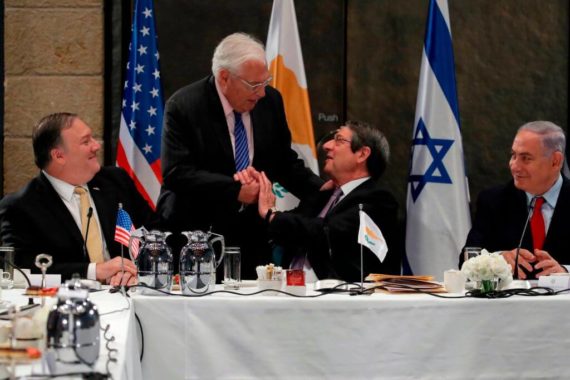 Greek Cypriot President Nicos Anastasiades (C) shakes hands with US Ambassador to Israel David Friedman as Israeli Prime Minister Benjamin Netanyahu (R) and US Secretary of State Mike Pompeo(L) look on, during their meeting in Jerusalem March 20, 2019 to discuss plans to build a natural gas pipeline from the eastern Mediterranean to Europe. Getty Images

The Eastern Mediterranean Basin, which has become a focus of interest for regional and global energy actors in recent years due to its natural gas reserves, is home to new developments every day. The countries of the Eastern Mediterranean that wish to increase their reserves and open their resources to foreign markets continue their resource exploration efforts with great speed with the purposes of becoming more important actors in the regional energy balance and integrating themselves to the international energy market.

Newly discovered reserves increase the energy potential of the region and give it a serious advantage on the subject of supplying resources to the most important energy demand markets in the world. And among these markets, European countries come first in terms of demand. Today, with the natural gas demand in European countries on the rise, energy supply security has become a matter of utmost importance and European countries have started approaching alternative energy transfer projects as a more sensitive matter due to the importance given to the diversification of resource supplying countries.

The region in the Eastern Mediterranean containing rich energy resource is named the Levantine Basin. The Levantine Basin contains the territorial waters of Turkey, Syria, Lebanon, Israel, the Gaza Strip, Egypt, the Turkish Republic of Northern Cyprus (TRNC) and the Greek Cypriot Administration of Southern Cyprus (GCASC). It is known that this basin has 3.4 trillion cubic meters of natural gas reserve capacity. The first extensive natural gas exploration activities in the Levantine Basin were conducted in 2009 in Israel’s territorial waters.

The question now is whether the energy resources will bring about prosperity or disorder to the Eastern Mediterranean countries.

Another important matter for the region alongside exploration activities is the matter of transport routes. Because the ultimate goal of the countries that have these resources is to generate income through supplying these resources to the markets. Certain meetings have been held and agreements have been signed among the countries of the region concerning the transportation of resources. But despite all these, no conclusive solutions have yet been reached in the Eastern Mediterranean regarding the transfer of energy resources.

The first question that comes to mind within this context is the question of whether these energy resources provide Eastern Mediterranean countries with a way to prosperity or whether they bring them into disagreement and disorder. Currently it can be observed that the agreements that have been reached are yet to yield results and instabilities continue to be present in the countries of the region. Meaning that the countries of the Eastern Mediterranean are yet to benefit from the resources they have. It is also beneficial to look at the subject of energy resources in the Eastern Mediterranean through the lenses of two subjects; the first concerning the legal and the second concerning the economic dimension of these resources.

The problem of legal status in Eastern Mediterranean

After the initial discoveries of energy resources in the East Mediterranean basin, international energy companies have started operating in the region and the basin has started receiving more attention from international energy actors. With these exploration activities becoming more extensive, the matter of the legal status of the exploration fields in the Eastern Mediterranean has come to the forefront. The fields in the region in which the legal status are most discussed are the fields claimed by the GCASC as their exclusive economic zone.

The Greek Cypriot Administration of Southern Cyprus has brought the matter of legal status in the Eastern Mediterranean into a deadlock by conducting unlawful exploration activities.

The GCASC has brought the matter of legal status in the Eastern Mediterranean into a deadlock by conducting unlawful exploration activities in the region. The areas it has declared as its own EEZ contain the territorial waters of Israel, Egypt and Lebanon. Through signing delimitation agreements with countries it shares maritime borders with, the GCASC has declared the aforementioned areas to be its own national waters.

Israel’s Mass Surveillance of Palestinians Is More Than an Obsession

By signing bilateral agreements with these countries in 2003, 2007 and 2010, the GCASC has both increased its resource exploration activities and ensured the opening of these fields to international consortiums. Hence the discovery of the Aphrodite field belonging to the GCASC in 2011. This unilateral decision the GCASC has taken in the Mediterranean is obviously an attempt to push the TRNC out of the equation. These steps that have been taken to block the TRNC from claiming any rights in these fields are also against the rules of international law. Thus, questions arise such as how long the GCASC will continue this attitude that opposes international law and whether new strategies are needed on the subject of bringing the role of the TRNC in the region to a more active state.

Turkey has been quite active in the region to ensure the protection of the rights of the TRNC. But as of this point, it can be seen that the GCASC is pushing its boundaries both through the meetings it conducts with the countries of the region and through the support of Europe. The rich potential of the Eastern Mediterranean with respect to energy reserves is making regional actors greedier day by day, and it also keeps the hopes of European countries regarding the region alive. This is the fundamental reason behind the fact that many actors exist in the region today.

Despite the Eastern Mediterranean being rich in resource potential and one where many exploration activities are conducted, there are no concrete steps taken on the subject of where and how the resources of the region will be transported. Due to the fact that the negotiations that have been ongoing among the countries of the region for years and the agreements that have been signed are yet to reach a conclusion, resources have so far failed to produce significant contributions to the region’s economies. Furthermore, this situation gradually brings the energy resources in the Eastern Mediterranean into a state of stagnancy.

Many scenarios have been brought forward by the countries of the region regarding the transfer of these resources. Among the transfer routes, the East-Med Pipeline Project is the one that receives the most attention due to being a project that receives financial support from the EU and transfers resources directly to the EU markets via a pipeline. This project aims to deliver the natural gas in the fields of the GCASC and Israel to Greece via a pipeline that will be built in the Mediterranean, and from there to the wider European markets. Despite officials frequently conducting meetings and making announcements regarding the implementation of the project, no concrete steps have been taken as of today.

The GCASC, Greece and Israel signed a trilateral agreement in November 2018 and expressed that they are ready to build the world’s longest and deepest pipeline to carry natural gas under the Mediterranean for 2000 kilometers. While this project has proven itself to be extremely high in cost, when the natural gas delivery capacity of the pipeline is considered, the profitability and productivity of this investment becomes a separate matter of discussion.

The reason why the EU has taken the risk of all potential costs of the East-Med project is that Europe desires to reduce its dependency on the natural gas supplied by Russia.

The main reason why the European Union has taken the risk of all potential costs of the East-Med project and is in search over other sources of financing is that the EU desires to reduce its dependency on the natural gas supplied by Russia. The resources of the Eastern Mediterranean have a critical role in ensuring the energy supply security of the European Union. Due to this reason, EU countries emphasize the importance of the region at every opportunity, and are in the effort to maintain active policies in the region and execute their plans regarding the region. Of course on the other hand it can be said that they want to keep the leverage granted to them against Russia by the potential of the Eastern Mediterranean becoming an alternative supply route as well.

Another important agreement regarding the transfer of resources in the region was signed in September 2018 between the GCASC and Egypt. This agreement foresees the transportation of natural gas in the Aphrodite field belonging to the GCASC to the natural gas liquefaction plant in Egypt. Thus, natural gas from the GCASC will be delivered to the markets through Egypt as LNG. This can be regarded as the most concrete step that has been taken so far regarding the future of Eastern Mediterranean natural gas.

Without a market-ready transfer route and without Turkey, an effective energy supply security is difficult to achieve.

The Eastern Mediterranean Gas Forum that was held between actors from the region in 2019 where the subjects of production, consumption and transfer of the energy resources in the region were discussed with the participation of energy ministers from Egypt, GCASC, Greece, Israel, Jordan, Italy and Palestine can be considered as one of the most extensive platforms that have taken place so far. But the fact that Turkey and the TRNC, some of the most important actors in the region, were not invited to the aforementioned forum raises questions about its sustainability. It seems likely that this partnership that excludes Turkey, which has a role of utmost importance in the region on the subjects of energy supply security and energy trade, will distance Eastern Mediterranean natural gas from opportunities and advantages.

Thus the most important subject for the Eastern Mediterranean today is the derivation of economic benefit from the resources of the region. Developments such as the discovery of new resources and increases in the natural gas potential of the basin are of course important, but without a market-ready transfer route built it is obvious that these countries will not have an effective role in ensuring their energy supply security. These countries, which ignore the fact that Turkey is the most ideal route for the transfer of energy from this region to European markets, will likely continue to look for solutions in the near future. But the important thing for Turkey is supporting its power in the region with natural gas exploration activities and becoming the most critical actor of the energy equation in the region.

Also Read
Revisiting the East Mediterranean Energy Game: What Will Change in the Coronavirus Days?
We use cookies to optimize your online user experience. To learn about our use of cookies and how you can manage your cookie settings, please see our Privacy Policy. By continuing to use our site you are excepting our use of cookies.Accept Cookies & CloseMore Info