Russia and Turkey demonstrate a readiness, in spite of all differences, to hear and respect each other’s interests. This can be seen in Syria within the framework of the Astana process. However, whether the "21st Century Deal" in the military-political sphere will arise in relations between Turkey and Russia is a big question, considering Turkey’s NATO membership – which nobody doubts. 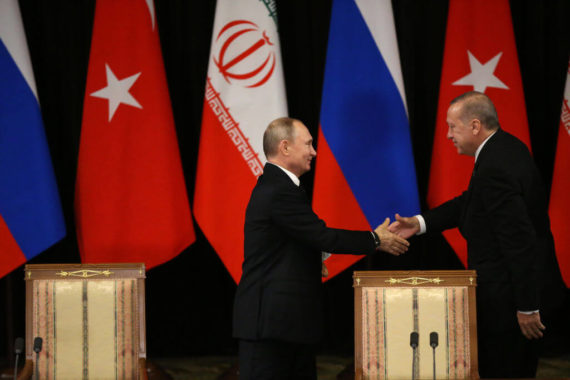 The collapse of the Soviet Union and the early years of the new Russian Federation were marked by the country leaving regions it was traditionally present. The leadership of the new “independent” Russia wrongly treated its rejection of the communist ideology and the dissolution of the Warsaw Pact to be a necessary and sufficient condition to consider the Cold War to be over.

The logical consequence of this erroneous point of view, as well as the economic difficulties of the first year after the collapse of the USSR, was a destructive foreign policy that narrowed the sphere of Russia’s strategic interests in regards to its closest neighbors. As a result, the Russian military-political presence in the world decreased noticeably: in particular, the most important Russian military bases (as successors to the USSR) in Cuba and Vietnam were closed.

Under these conditions where Russia had temporarily lost its geopolitical view, the so-called “logistics point” in Syria’s Tartus (existing since 1971), remained, literally by miracle, as a Russian asset. The unrestrained expansion of NATO to the East towards the Russian borders, as well as the numerous conflicts unleashed by the U.S. and its allies across the world, led Russia to the need to return to a more active foreign policy position. As a result, the Russian administration initiated negotiations on the re-establishment of military bases in Cuba and Vietnam.

Russia’s participation in the civil war in Syria led to an increase of the role and strengthening of the Russian Mediterranean bases, including the Russian Navy base in Tartus and the aviation group at Hmeymim airport. It ought to be stated that the Russian presence in the E. Mediterranean will grow in the near future outside the conflict in Syria due to the energy wealth in the region, as well as the growth of terror. It is obvious that in addition to the terror threat, the new U.S. policy in the Middle East will have an influence on Russian plans.

An integral aspect of Russian foreign policy is energy diplomacy. At the heart of this is the need for Russia to ensure safe and reliable corridors for the delivery of its energy resources – oil and natural gas – to world markets. First of all, we are talking about the largest European market.

For the first time in the history, Turkey is becoming a transit country for the supply of Russian natural gas to Europe.

This is the reason for the new format of relations between Russia and Turkey in the framework of the Turkish Stream gas pipeline construction project, instead of gas transit through Ukraine. For the first time in the history of bilateral relations, Turkey is becoming a transit country for the supply of Russian natural gas to Europe.

The Mediterranean factor also arose in relations between Turkey and Russia. This is related to the construction and operation of the first Turkish nuclear power plant, Akkuyu, by Russia in the area of the Mediterranean city, Mersin. The strategic facility obviously requires special security measures. This not only means protection on the ground, air and sea of the perimeter of the nuclear power plant itself, but also the protection of routes for the delivery of nuclear fuel to Akkuyu and for the removal of waste.

Thus, the Akkuyu NPP creates another issue in the broad agenda of cooperation between Turkey and Russian in the military-political sphere. The basis of this cooperation – the Astana format – is also directly connected with the Mediterranean region.

The situation that is unfolding today around the gas fields of the Mediterranean cannot escape Russian attention, as the country is one of the leaders in gas production and gas trade. Up to now, in the confrontation between Turkey and the Turkish Republic of Northern Cyprus on the one hand, and Southern Cyprus, Greece, Israel, and Egypt (which are backed by the U.S., EU and global corporations), on the other, Russia has not yet said its word.

Russia has only two options for responding to the situation in the Eastern Mediterranean.

The first option is a policy of non-intervention, since Russia’s greatest strategic interest in the energy sector is directed towards the Arctic basin. And the possibility of obtaining access to the fields of the Eastern Mediterranean and its profitability for Russian mining companies is not obvious.

Thus, the active involvement of Russia in the confrontation around the disputed gas fields of Cyprus, without creating obvious economic benefits can cause unnecessary tension for Russia either in relations with Turkey, or in relations with a broad front of regional and Western countries. This includes the UK, which is expanding its air force on the island, as well as France, which recently signed an agreement with Southern Cyprus on the establishment of its naval base in the area of the village of Marie.

At the same time, the option of Russia’s support of Southern Cyprus, directly or indirectly, in a dispute with the Turkish Republic of Northern Cyprus is practically excluded. Not promising big benefits, the issue could cause a logistically unjustified crisis in relations between Moscow and Ankara. Needless to say, these days Moscow has high hopes for expanding its arms trade, as well as for further building up cooperation with Turkey on a whole.

So, as the second option for Russia, the administration could consider supporting Turkey and the Turkish Republic of Northern Cyprus in the gas dispute in the E. Mediterranean.

Russia has only two options for responding to the situation in the Eastern Mediterranean. The first is by taking no sides and the second is considering to support Turkey and the Turkish Republic of Northern Cyprus.

It should be noted that the format of the Astana process in Syria, no matter how hard it is implemented, is a Russian-Turkish success story. Another issue is that Astana is a “wartime” process and, of course, will cease to exist after the end of the active phase of the civil war in Syria. Such a stage, as of 2019, is just around the corner. And Russia is interested in creating long-term institutions of “peacetime” military-political cooperation with Ankara.

These institutions could link Russia and Turkey in exactly the same way that, in the economic sphere, the two countries are linked to each other by the Akkuyu nuclear power plant, the Turkish Stream gas pipeline, the S-400 deal, tourism, mutual investments, and much more.

Let us repeat this point: Russia and Turkey have strategic projects that serve as the foundation stone of bilateral relations in the economic sphere.

And in the military-political sphere, the Astana process is a good starting point in the absence of established institutions of Russian-Turkish cooperation in this field. The Russian leadership is fully aware of the fact that both the Astana process and the S-400 deal creates an opportunity for Russia to develop relations, for example, in terms of creating a framework of relations with Turkey in the military-political sphere in the long-run. The point of entry for this cooperation has already become the Mediterranean (Syria) and, in principle, it could be increased if certain conditions arose.

In Russia, there are often voices defending the point of view about special relations between Russia and Greece, which are implicated in the historical and religious community. However, fortunately for Russia, in Russian foreign policy there are hardly any so-called “brotherhood” factors (the most vivid example is the modern relations of Russia and Ukraine) but more sober political calculations based on real benefits and real interests.

Unlike Turkey, Russia’s relations with Greece have neither anchor projects, nor large common strategic interests, nor prospects for a cardinal increase in trade, economic & political ties.

Unlike Turkey, Russia’s relations with Greece have neither anchor projects, nor large common strategic interests, nor prospects for a cardinal increase in trade, economic and political ties. In figures, Russian exports to Turkey are approximately 7 times higher than Greece. Willing or unwillingly, Greece is a part of the anti-Russian EU economic sanctions. Therefore, it is unlikely that the factors of “fraternal” Greece and “fraternal” Cyprus will be considered as a deterrent for Russia to come forward on the Turkish side in the Eastern Mediterranean.

Another issue is that the only possibility of an Eastern Mediterranean deal between Turkey and Russia is an agreement that goes beyond energy cooperation itself. Only this will justify drawing Russia into the regional confrontation. Let us immediately make a reservation that, compared with the policy of neutrality in the gas dispute, the possibility set out below should be considered as markedly less likely.

Russia could side with Turkey and the Turkish Republic of Northern Cyprus based on the strategic goal of building up its military and political presence in the Eastern Mediterranean. And also, based on the understanding of the historical chance to form a long-term military-political alliance with Turkey, which has risen possibly for the first time since the days of the founder and first president of the Turkish Republic, Mustafa Kemal Ataturk.

If you go into theoretical reasoning, then such a long-term Russia-Turkey alliance would promise both sides immediate and numerous benefits far beyond the scope of the Mediterranean basin itself. For example, the joint contribution of the parties to ensuring security in the Caucasus, Central Asia, and the security of the Black Sea basin, can be noted on the basis of the regime envisaged by the Montreux Convention, etc.

Russia and Turkey demonstrate a readiness, in spite of all differences, to hear and respect each other’s interests. This can be seen in Syria within the framework of the Astana process. However, whether the “21st Century Deal” in the military-political sphere will arise in relations between Turkey and Russia is a big question, considering Turkey’s NATO membership – which nobody doubts. But only such a Russian-Turkish deal, far beyond the scope of energy, can justify drawing Russia into an international confrontation developing around the gas fields of the Mediterranean Sea.