Will the EU Keep the JCPOA Alive?

While the EU’s grand effort to keep the JCPOA alive seems to fail in the future, unlike the U.S., the participant countries have shown that they still maintain the channel of communication with the government of Iran. 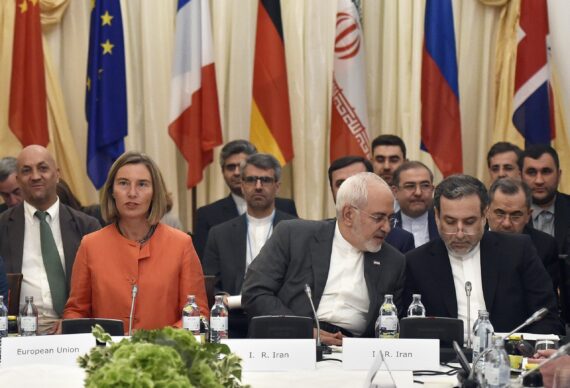 Upon the request from Iran, on July 6, 2018, the remaining parties of the Joint Comprehensive Plan of Action (JCPOA) gathered to discuss the future of the agreement at the Joint Commission. The officials and leaders of Iran, China, Russia, the U.K., France, Germany, and European Union leaders had initiated bilateral talks in order to underline their commitments to the agreement. However, the remaining countries of the agreement have held this multilateral meeting for the first time since President Trump announced to withdraw from the Iran Nuclear deal. Chaired by the EU High Representative Federica Mogherini, foreign ministers from the countries that remained in the JCPOA attended the meeting to discuss the ability to export gas and oil from Iran.

The diplomatic language in the statement released after the meeting appears to be promising for the future of the agreement.  As stated in the bilateral meetings, attendants of this meeting were not reluctant to mention that they “reconfirmed their commitment to the full and effective implementation” of the agreement. The remaining JCPOA countries intend to keep themselves motivated when considering the list of objectives attached in the statement. According to the list, parties aim to, among others, increase the economic and sectorial cooperation. Most importantly, they added the objective of protecting “companies from the exterritorial effects of U.S. sanctions,” which has been the most severe legal impediment to implement the JCPOA effectively. In other words, the extraterritoriality of the upcoming sanctions imposed by the U.S. authorities will hamper the ability of the remaining parties to comply with the obligations arising from the nuclear deal.

In regards to the withdrawal of the U.S., the remaining parties began to formulate several means to tackle with the U.S. sanctions against Iran. As included in the statement, one of these means includes the adoption of the “Blocking Statute” which aims to protect European companies operating in Iran against the U.S. sanctions by preventing a judgment of a court located outside the EU to be enforced.

The question arises as to what extent the EU will effectively address this by adopting a blocking statute, regarding the fact that several European companies have already decided to terminate their business in Iran. This was worrisome when considering the lengthy legislative process and the structural changes in the EU. It was unlikely that the immediate reaction coming from EU leaders in the political arena or at the bilateral level did facilitate the complexities in the language of the legislation drafted in 1996. Since 1996, the EU has passed tremendous changes, adopted three main treaties that have altered the primary structure of the EU. These changes include the ones in the realm of EU financial institutions, which are mainly “reliant on access to U.S. markets and the U.S. dollar.”

In the meeting on July 6, 2018, the participants shortly noted that the blocking regulations were now in the process of updating. This procedure could be summarized as follows:  On May 16, 2018, the President of the EU Commission, Jean-Claude Juncker, along with the High Representative Mogherini, presented the proposal to update the blocking statute. The proposal includes four comprehensive measures to be taken. First, the list of U.S. sanctions on Iran will be updated in order to determine the scope of secondary sanctions that could potentially be imposed against European companies. Second, the proposal will aim to eliminate the impediments for the European Investment Bank by guaranteeing financial activities in Iran. However, it was also noted that by adopting this proposal, the EIB was not intended actually to support projects in Iran. Third, the proposal will focus on sectorial cooperation with Iran, especially in the energy sector. Fourth, the EU Commission will encourage Member States of the EU to find out the options of one-off bank transfers to the Central Bank of Iran in order to transfer oil-related revenues.

Last month, on June 6, 2018, the EU Commission adopted the proposal, and it will enter into force in 2 months unless other institutions, namely the European Parliament and the Council of the European Union object to the proposal. Recently, on July 4, an attempt to object to this proposal was made by the far-right political group EFDD but it failed with only 93 votes for, 573 against and 11 abstentions. As to the Council of the EU, formed by the ministers from the Members States, can, in principle, raise their objections but they are expected to follow their leaders who agreed to stand with the proposal. It is likely that the EU will adopt the blocking statutes in order to cope with U.S. secondary sanctions, albeit the capacity to cope with the U.S. sanctions remains unclear.

In addition to the legislation procedure in the realm of the EU, the meeting held on July 6 gives several significant indications for the future of the Iran deal. Most importantly, as experts argue, the statement released after the meeting does not specify “any concrete means” to achieve the abovementioned goals. This two-page statement with ten clauses does not declare a clear roadmap for Iran and other remaining countries in the deal as expected.

While the EU’s grand effort to keep the JCPOA alive seems to fail in the future, unlike the U.S., the participant countries have shown that they still maintain the channel of communication with the government of Iran. In order to maintain peace in the region, states that remain in the agreement took a more difficult challenge than just withdrawing.