Though both the rulers and ruling party of China are proud of reaching the second top level spot in economic development after the U.S. globally, this does not give any hope to the peoples living in the autonomous regions. 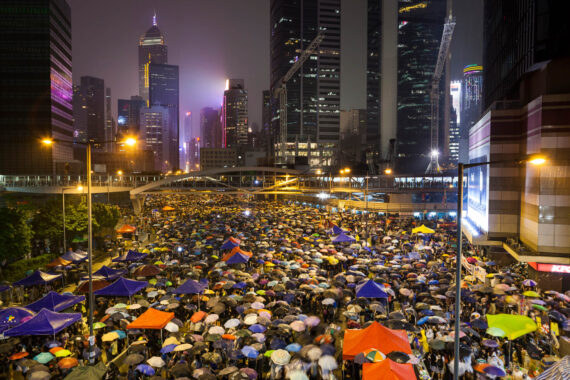 The re-emergence of a series of mass demonstrations in large avenues and public squares of Hong Kong, which is recognized as being among the international financial and trade centers, in the middle of June, is not surprising.

The people of Hong Kong have been on the streets opposing a proposed law allowing the extradition of suspects for trial in mainland China.

This law arrangement offered by the Island’s Chief Executive to be discussed in parliament without consulting the public is believed to be a political decision imposed by mainland China.

What makes the series of demonstrations important is that people in Hong Kong are having growing suspicions about the fairness of rule on the island.

A thriving number of protestors, who represent the diverse ways of life in Hong Kong society, have come together in order to protest against the reshaping of the island’s political environment. This also shows that they feel themselves to be under a gradually growing threat and danger of the impositions made by Beijing.

While the Chinese government argues that the proposed law is related to security issues, people in Hong Kong consider it as a tool of impairment of the established democratic rules and regulations in the island.

In Hong Kong, there have been consecutive arrangements making the Island’s public life unbearable.

The latest law proposal is not a sole case, rather it is proof that there have been consecutive arrangements making the Island’s public life unbearable in terms of public law rights.

This is the exact reason behind the Island’s public outpour onto the streets as an expression of their view against the undemocratic processes run by the rulers who have been accused of being puppets of Beijing. Chinese rule tries to impose its own repressive laws, as observed in the form of the extradition case, bypassing the Island’s public through utilizing the institution of the Chief Executive.

In this regard, the mass demonstrations can be fairly considered as a reaction to the imposition policies of the rules and regulations by Beijing. In fact, this is not the only reason for the enduring demonstrations but rather it is considered to be another stage of curtailment of the Island’s socio-political landscape, determined by Beijing’s politics.

Starting just a few days before the second-round discussion of the law proposal in parliament, the demonstrators were able to suspend the process. In addition, although they were unable to succeed in forcing the resignation of Carrie Lam, the Chief Executive, from her post, the latter has publicly apologized to the public.

This is a mass movement by civil participants who marched in a peaceful manner through the large avenues of the Island, which also witnessed the Occupation movement in 2017 in response to mainland China rule which failed to keep its promise to initiate universal suffrage.

Some believe that mass protests in Hong Kong were just standard, but, in fact, the demonstrations are the proof for the transformation of the Island dwellers in terms of political mobilization.

Though some circles assume that this was just a standard demonstration, in fact it is a proof of the crucial transformation of the Island dwellers in terms of political mobilization.

Taking the huge participation into consideration, one can assert that the failure of China rule seems to have naturally united the people of the Island to advocate for their rights.

In the past several years, the Island’s dwellers have been gradually transforming, as observed, into a mass movement in growing numbers to save their future from the undemocratic rule of China. And this is the picture of Hong Kong in these years.

There are some important aspects to the June demonstrations. First, it shows a significant increase in the number of participants, exceeding that of the 2014 demonstrations.

It was then known as the Umbrella Movement, which took stage for almost 3 months against the undemocratic practices of the Island government and was described as historically the largest turnout with an attendance of over a million individuals.

Secondly, it signals to both the Island’s special administration, and to Beijing, that the Island’s public highly care about their future and the freedom of the next generation.

Thirdly, the Hong Kong diaspora, such as students and migrant workers, particularly in Western capitals came out in support of the movement. Despite their minor numbers, these appearances were symbolically important, with banners demanding that their democratic rights not be grabbed by mainland China. This means that the political movement in Hong Kong is expanding onto the global stage.

Fourthly, these demonstrators are capable of organizing demonstrations on their own personal initiatives and through their civil institutions which seems to be quite challenging for Beijing. There is no doubt that this reality is giving a strong message to the mainland China rule.

At this point, one should argue that there is a strong division between the Islands’ ruling elite, who represent mainland China’s political regime, and the Hong Kongers who call themselves the citizens of Hong Kong, not citizens of the People’s Republic of China.

But today what marks these June demonstrations, continuing till date, is the active participation of the huge number of people. In fact, these are the largest demonstrations seen in the Island against Chinese rule since the Island’s union with China in 1997.

The Island folks admit that they will not surrender to the rulers of the Island’s administration, who are directed by Beijing.

The Island folks admit that they will not surrender to the rulers of the Island’s administration, who are directed by Beijing. This challenge bores immediate results in that Carrie Lam, the Chief Executive, announced the suspension of the discussions pertaining to the mentioned law in parliament. In the aftermath, however, she has declined, till today, to withdraw the proposed law or resign from her post.

These series of demonstrations are clear expressions of democratic wishes of the people on the Island. Here, one can argue that these large scale social movements prove the discontent of the ordinary Island folks against the current political rule in China. And the former does not want to relinquish the political arena to the latter to play its own game freely.

Though both the rulers and ruling party of China are proud of reaching the second top level spot in economic development after the U.S. globally, this does not give any hope to the peoples living in the autonomous regions, which are under the indirect rule of Beijing such as Hong Kong.

The increase in the size of demonstrations in Hong Kong has already become an increasingly discernable phenomenon for the people to express their views, especially those who feel themselves to be under the threats and pressures of China.