Will the Trump Administration’s Syria Policy Change after the Chemical Attack?

Turkey should be neither too pessimist nor too optimist especially after Rex Tillerson’s statements on Syria, which were recently laid out after a joint press conference with Russian counter-part Lavrov. Tillerson underlined the urgency of Assad’s departure, however he added that the US is not going to lead it. His statement is a good summary of the American position, in that it is standing up for Syria.  The next step should be to realize that Turkey has a clear strategic advantage and can become that leading figure on the Syrian battleground needed to remove Assad. 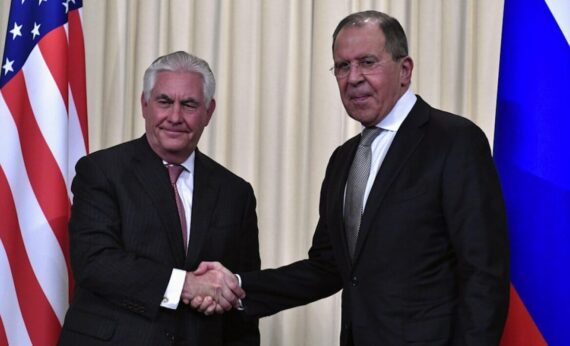 Chemical weapons have been used 45 times in Syria since last year, according to the Director General of the Organization for the Prohibition of Chemical Weapons (OPCW), which monitors the elimination of the toxic arms in order to ensure international security. The most recent chemical attack to draw world attention took place on April 4, 2017 in Khan Sheikhoun district, which is located in southern Idlib. The Khan Sheikhoun attack also prompted the fledgling Trump administration to carry out a cruise missile strike on a Syrian airbase allegedly used for the chemical attack, which targeted innocent civilians and children.

In response to the use of chemical weapons against innocent civilians, the root causes of the Trump authorization of a missile attack in Syria have been widely discussed at the international level. Trump’s missile strike could be interpreted as taking a stand against the use chemical weapons, which had been clearly marked as a ‘red line’ in Washington’s Syria policy by the previous administration. Back in 2013, President Obama had said any violation of the red line could lead to a possible change of US policy towards the Syrian civil war.

Apparently, Trump and his predecessor Obama are on the same page about what a red line in the Syrian civil war is. According to US Secretary of State Rex Tillerson, the top leadership of the Assad regime ordered the Khan Sheikhoun attack and decided to employ deadly chemicals including sarin gas to hit innocent people. Nevertheless, Syria and Russia are adamant that the recent sarin gas attack is a ‘false flag’ operation that Al-Qaeda or one of the Al-Qaeda-linked terrorist groups that controls the Idlib province set off in order to elicit an American intervention which put 20% of Assad’s air force out of action. However, if we take a look at the recent history of the use of chemical weapons in Syria, despite international condemnation, significant non-overlapping arguments were laid out by the Syrian government and even by the OPCW.

Even though Syria signed the Chemical Weapons Convention in October 2013 and OPCW reported Syria had removed all of its chemical arsenal in June 2014, the Syrian government went on to carry out chlorine gas attacks several times in Idlib. It is possible that Syria has used the Chemical Weapons Convention as a screen, so it can attribute future deadly chemical attacks on opposition groups fighting in Idlib.

Most probably, the Syrian government did not expect a sudden US attack that  would destroy one of their significant airfields. From now on, there is a possibility that Trump’s retaliatory attacks might stop Assad from using chemical weapons. Apparently Russia can quickly replace the lost aircraft at the destroyed airbase, so it is difficult to anticipate the future of Syria and how the recent US attacks might change the balance of power on the battlefield, specifically in Idlib province where the next “mother of all battles” is yet to come.

Following the chemical attack, the international community has renewed calls for supporting regime change and removing Assad from Syria, arguing that if this does not happen, Syria will stay vulnerable to further gross human rights violations. Even though the US has followed a pro-active policy in the region over the last 15 years, this time it seems that Trump’s policy in the Middle East would be “reactive.” So far, Trump’s policy has not offered any concrete solution to stop the humanitarian crisis except offering condemnation and carrying out some warning attacks. Most probably, Trump’s policy in the Middle East will not be a huge departure from that of Obama’s.

Trump’s reaction to the deadly chemical attack is rather symbolic and discursive, and does not change his stated aim that his top priority in Syria is to defeat DAESH. Syria urgently needs two rational solutions for two rising concerns which threaten the collective security of the region. One of them is to curtail the presence of terror organizations such as DAESH and PYD in the region. The other is to stop chemical attacks targeting civilian-inhabited areas and causing mass casualties. In this regard, Turkey could possibly get a leading role and step up for a pro-active policy in the region, especially after its Euphrates Shield Operation in Syria has been shown to be so successful.

Turkey Was Right to Consistently Call for Assad’s Ouster

After wide-spread chemical attacks in Syrian territory, the international community has been able to find the lowest common denominator and chanted “Assad must go” with one voice, however Turkey has known of the urgency of Assad’s ouster since the beginning of the war. After the chemical attack Turkey has renewed this call one more time.

The state apparatus in Syria has completely been destroyed and the legitimacy of the regime is highly questionable. More than 11 million people have been displaced (almost half of Syria’s population) and the economy has shrunk 65% since the start of the war. This is in addition to the situation even before the conflict began, when many Syrians were complaining about high unemployment rates, widespread and normalized corruption, and a lack of political freedoms.

Who Will Take the Lead in the Syrian Battleground?

The current situation in Syria is pathetic, as another deadly chemical attack was launched against innocent civilians, but no single institution or government seems sure of what the next step will be, and who is going to take the leading role. Moreover, there are communication problems between Moscow and the US, whose priorities are clashing against each other, with one side working for the “survival of the regime” and another for “fighting DAESH.” No one knows how Russia will take the facts of the recent chemical attack in discussions with their US counterparts, so the level of dialogue is very critical between the two powers and will determine the future of Syria under the Trump administration.

After a meeting with Putin on May 3, Erdoğan will meet with Trump on May 16. That meeting will turn out to be critical, as it will be the first “face to face” encounter between the two leaders. Additionally, two key NATO allies will have the chance to mend a relationship that was wounded by persistent US cooperation with PYD, the Syrian branch of the PKK.

Turkey should be neither too pessimist nor too optimist especially after Rex Tillerson’s statements on Syria, which were recently laid out after a joint press conference with Russian counter-part Lavrov. Tillerson underlined the urgency of Assad’s departure, however he added that the US is not going to lead it. His statement is a good summary of the American position, in that it is standing up for Syria.  The next step should be to realize that Turkey has a clear strategic advantage and can become that leading figure on the Syrian battleground needed to remove Assad.