If the U.S. withdraws from Syria under a deal to let the Turks in, it could significantly mend US-Turkey relations; without a deal, Erdogan could still get what he wants but there would be much less political windfall to the alliance. 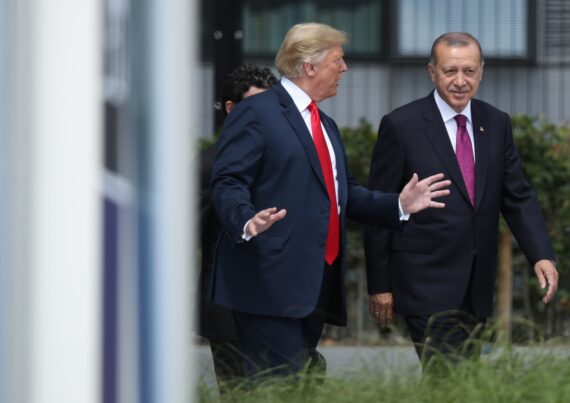 Turkey’s President Recep Tayyip Erdogan had said earlier in September that he would discuss the problems between Turkey and the United States when he met with the U.S. President Donald Trump on September 25, as part of his trip to New York for the opening of the United Nations General Assembly. But neither side has revealed what was discussed and if anything was resolved.

There was no shortage of issues for the two leaders to talk about. There are still Americans imprisoned in Turkey. The U.S. refuses to deport Fetullah Gülen, whom Ankara holds responsible for the 2016 coup attempt. There is an ongoing dispute over the enforcement of sanctions on Iran. Perhaps most immediately and gravely, Turkey’s purchase of the S-400 anti-aircraft system from Russia will, by the letter of American law, incur sanctions that could do serious harm to the Turkish economy.

Still, there are creative ways around most of these issues. For example, the U.A.E. has strong economic ties with Iran, and the U.S. abides it. Proposals have already been put forth to finesse the S-400 issue, and so on. The crux of the U.S.-Turkey dispute, and the one where interests are radically incompatible, is Syria.

In the summer of 2011, after months of trying to find a peaceful resolution between Syrian dictator Bashar al-Assad and protesters failed because of the regime’s  continuing murder of civilians, the Turkish government, which already provided a safe haven for refugees fleeing the carnage, began supporting the nascent armed rebellion. The U.S. ostensibly supported the revolutionary movement, though never seriously tried to tip the balance in its favor and over time shifted its policy ever-more-firmly in Assad’s favour for reasons related to Iran policy.

When the U.S. was eventually forced to intervene in Syria in late 2014 by the rise of the Islamic State (ISIS / Daesh), the U.S. tried to engage in counter-terrorism alone. The U.S. wanted to avoid entanglement in the underlying Syrian war, particularly any anti-Assad activity, because the Iranians had made it clear that they would walk away from nuclear negotiations if their proxy regime in Syria was threatened. The attempt by the U.S. to run a narrow counter-terrorism war in Syria was inherently flawed on its own terms, since Assad was the incubator of ISIS and counter-terrorism cannot be separated from the political context. But in the choice of partner for this mission, the U.S. created a whole new crisis.

The U.S. chose to work with the Democratic Union Party (PYD) and its armed wing, the People’s Protection Units (YPG), to defeat ISIS. The PYD/YPG has had close relations with the Assad regime, Russia, and Iran for decades, and retained cordial relations with the pro-Assad coalition after the war began. The PYD/YPG thus could be trusted not to draw the U.S. into a confrontation with the regime. As a side-effect of the anti-ISIS war, the PYD/YPG was left in control of nearly one-third of Syria that ISIS had taken away from the rebels—a radical redrawing of the political map in Syria that the U.S. was publicly opposed to meddling in. And this created problems that were not limited to Syria.

The PYD/YPG that the U.S. has so vastly empowered is a department of the Kurdistan Workers’ Party (PKK), a terrorist group that has waged war on Turkey since the mid-1980s. The attempt to rebrand this force as the “Syrian Democratic Forces” (SDF) by attaching a few dependent Arab groups might suffice to convince the Western media that “Rojava” is a multi-ethnic democracy, but it is hardly convincing to the people who live under its authoritarian rule.

Whatever the ethnic composition of the SDF and its civilian affiliates, the PKK retains sole military-political control. Within Syria, this has created an explosive situation where a demographically and politically alien party is ruling over resistant Arab populations, and for Turkey a PKK state on its borders is seen, not unreasonably, as a dire security threat. That the U.S. is underwriting this project has created a rift in NATO that Russia has been quick to exploit.

Turkey has twice intervened in Syria, in 2016 and 2018, to push the PKK away from areas of its border in the west and continues to hold these zones through Syrian Arab proxies. These operations left the PKK holding territory mostly to the east of the Euphrates, and Erdogan has repeatedly threatened to initiate a third operation against this zone.

The U.S.’s response to this has been to try to avert a Turkish incursion in eastern Syria where its own forces are based. To do this, the U.S. proposed the “Manbij roadmap”, a model that would, in theory, assuage Ankara’s concerns by removing YPG/PKK control of various urban centres and setting up joint U.S.-Turkish patrols. This has since morphed into a proposal for a “safe zone” that would buffer between Turkey’s border and the PKK-held areas. Given the failure of this concept in Manbij, where the PKK simply reflagged its cadres, Ankara was understandably sceptical to begin with and negotiations have duly stalled. While there has been misdirection on all sides, and proposals for the U.S. to arm-and-equip a 100,000-man PKK force in Syria indefinitely do little to improve the atmosphere, the fundamental problem is less bad faith than diametrically opposed priorities.

Turkey sees the PKK as the primary issue and wants a twenty-mile (30 km) zone under its control inside Syria to deal with this. The U.S., focused monomaniacally on ISIS, wishes to preserve “stability”, however short-termist the definition, and is therefore prepared to grant a much more limited Turkish presence in an area it intends to continue to control, but which is supposedly clear of PKK forces. Displeased with the process, the Turkish government has attempted to gain leverage by signaling a willingness to act unilaterally.

In early August, Erdogan said that Turkey could “only be patient for so long”. At the end of that month, the Turkish president said, “If our soldiers do not control the region [east of the Euphrates] within a few weeks, we will put our own operation plan into effect”. On 18 September, Erdogan said the U.S. has two weeks (to 2 October) to deliver “results”, or else Turkey would go it alone. Most recently, in his U.N. speech, just hours before he met Trump, Erdogan spoke of establishing a 30-km “peace corridor” along a 480-km stretch of the Syria-Turkey border into which two million Syrian refugees in Turkey could be resettled. To underline his point, Erdogan brought along a map.

So, what happens now?

It is extremely unlikely that Turkey will intervene east of the Euphrates by the early October deadline, and highly unlikely that Ankara will risk clashing with U.S. forces at any other time. As such, some version of the status quo—with the U.S. buying time and Turkey preparing to intervene but never quite getting there—could perpetuate for quite some time. That said, low probability, high impact events are not unknown in the Middle East, and this is a situation that has two major wildcards, Erdogan and Trump, plus a trendline that from several angles favours one particular outcome.

From the Trump side, he wants to leave Syria—he has tried twice and been restrained by his officials—and it is possible that he might finally get his way, especially with people like National Security Adviser John Bolton now out of the administration. Trump’s “maximum pressure” rhetoric is a thin veneer for his desire for a deal with Iran, and he might well follow Obama in trading Syria away to get Tehran’s signature.

If the U.S. withdraws under a deal to let the Turks in, it could significantly mend U.S.-Turkey relations; without a deal, Erdogan could still get what he wants but there would be much less political windfall to the alliance. It is also possible, however, that the U.S. would withdraw after organizing with Russia to reconcile the PKK and the Assad/Iran system. Even if Turkey got a narrow buffer zone under this latter arrangement, it would fully restore to Damascus the PKK weapon it used for decades against Turkey.

On the other side, because it is so clear Trump wants out—the number of U.S. troops has been halved to 1,000 this year—Erdogan might calculate that an incursion would not result in triggering the U.S. tripwire, but in Trump deciding to wash his hands of the Syria dilemma altogether. He might even be correct, though it would be a reckless gambit with profound political costs to a relationship with America that is, after all, and despite the current President’s view, about more than just Trump.

Kyle Orton is a researcher focused on the Syrian conflict. He tweets @KyleWOrton