The old Turkey was a period when the nation was reduced to only one ethnicity as prescribed in the Student Oath, multiculturalism was disregarded, and the ones not conforming to this model were not even considered proper citizens. 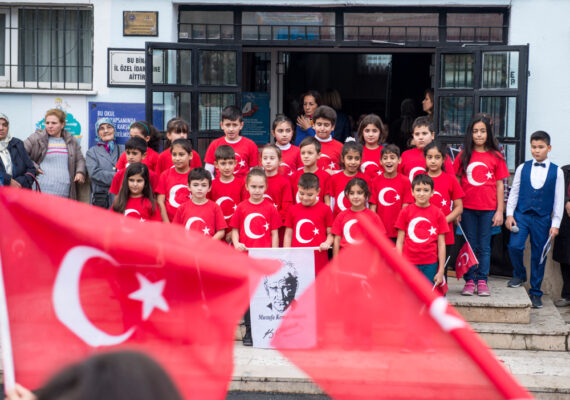 The Student Oath that was mandatorily recited in primary schools at the beginning of every school day for 76 years was abolished in 2013. Then Prime Minister Recep Tayyip Erdogan reminded Turkey of the situation in Europe at the time that inspired the Oath: “During the 1930s, such practices such as Hitler’s and Stalin’s were common to shape society. You can’t see any of these practices in developed countries, which muster children to recite a text containing racist slogans.”

This oath, which reads: “I am a Turk, honest and hardworking. My principle is to protect the younger, to respect the elder, to love my homeland and my nation more than myself. My ideal is to rise, to progress. My existence shall be dedicated to the Turkish existence,” was written in 1932 by then National Education Minister Resit Galip, who was referred to as a close friend by Mustafa Kemal Ataturk.

Recited in schools as of 1933, the oath prescribed the model citizen of the Turkish Republic. With this prescription and other additional measures in the Republic of Turkey, which was established on the renunciation of a heritage, Turkey’s 1000 years of history and identity were downplayed by disregarding that the country is the remnant of a great empire that encompassed Kurds, Circassians, Abkhasians, Muslims and non-Muslims. Excluding all the other identities, only a constructed idea of “Turkishness” was recognized as part of the efforts to establish an ethnicity-based nation state.

Following the memorandum released in 1971 by the military, the guard of the country back then, two prayer-like phrases were added to the oath. “O Great Atatürk, who had created our life of today; on the path that you have paved, in the country that you established, I swear to walk incessantly with the purposes that you have set. How happy is the one who says “I am a Turk.”

During the term of the government that was founded after the post-modern military coup on February 28, 1997, it was ordered that the oath would be recited at the beginning of every school day instead of only the first day of the week. In fact, schoolchildren were not the only group forced to recite the oath, adults imprisoned during the military junta periods were also forced to recite it for numerous times until they screamed and cried. This was done in almost every prison, including the Diyarbakir and Mamak Prison – the latter being one where most of the prisoners supported Turkist ideology.

The recital was defended by contending that the oath strengthened the younger generations’ sense of belonging to Turkish citizenship on a constitutional ground and secured administrative stability, adding that objecting to the mandatory recital in schools is not based on any scientific ground. This is what the Council of State has said in a nutshell, who issued a verdict on the application filed by the Education and Science Workers’ Union (Eğitim-Sen) five years ago for the annulment of the provision that abolished the mandatory recital of the oath.

Following the State of Council’s verdict, Pandora’s box has been opened again. Everyone has voiced their own opinion on the Student Oath according to their political affiliations. As a requirement of his party’s historical mission, the Republican People’s Party (CHP) Deputy Chair Faik Oztrak said: “As the Council of State reminded us once again, our Student Oath, which is based on Atatürk nationalism, does neither exclude any ethnicity nor aim any polarization. The oath represents the ideals of the nation and the Republic within the country’s integrity while internalizing the notions of love and respect. It symbolizes the aim of development. If there is a legal order, then the oath will be recited in schools again.”

The Parliamentary Constitution Committee Chairman and former Justice Minister Bekir Bozdag, on the other hand, responded by hinting at the tutelage regime of the old Turkey that used to be ruled by the military and the judiciary: “With the Student Oath verdict, the Council of State overstepped its limits of governing compliance with the laws, attempted to assume the position of the executive body and disregarded the discretionary power of the executive body. In brief, it avowedly violated the Constitution and the relevant law.”

Meanwhile, the Nationalist Movement Party (MHP) leader Devlet Bahceli did not only side with the Council of State’s decision, but also targeted Bozdag in a way that evokes the 76 years of collective memory: “Mr. Bozdag can say that he is Kurdish and he is free to do so. There is no one attempting to silence him. So, he is entitled to evaluate the situation according to his own temper and disposition. The Turkish nation bestowed him a senior position. So, he cannot think of denigrating the Turkish nation.”

A journalist friend of mine once said: “Nationalism is anteroom to racism.” This disease was inflicted on our territory by the West in the guise of nationalism some 200 years ago and in the form of racism during the 1930s. The Republic of Turkey paid heavy costs for the efforts to build an ethnicity-based nation that ignores multiculturalism and diversity although it was the remnant of a grand empire.

The old Turkey was a period when the nation was reduced to only one ethnicity as prescribed in the Student Oath, multiculturalism was disregarded, and the ones not conforming to this model were not even considered proper citizens. Of course, the present situation of the country is not flawless, but the old Turkey is already left behind.

In today’s Turkey, in which 4 million Syrian refugees are hosted and more than 600 thousand Syrians are to receive education, this oath does not have any relevance or validity. In this sense, President Erdogan announced in a determined demeanor that he will not condone the practices reminiscent of the single-party period’s CHP: “Does the recital of a uniformist text by our children every morning have any sense? What is the point of criticizing our Constitution Committee Chairman through his ethnicity and disposition? You claim that you are not segregationist, but you are insulting and threatening the Constitution Committee Chairman who has been a parliamentary member and a minister. We are standing behind him.”