At this stage, the most important objective for Turkey is to solve the potential radicalization of the armed groups. If Turkey can deliver its objective, then it can keep its overall position in the Syrian civil war. 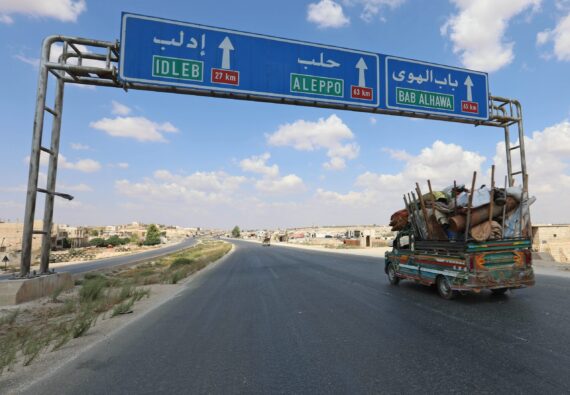 Residents of the Idlib province flee toward the Syrian Turkish border on September 10, 2018. Getty Images

The Idlib uncertainty is temporarily over. However, following the Sochi Summit held on Monday, September 17, debates about the real winner in the Idlib case remains unclear. From a humanitarian standpoint, protecting more than 3 million civilians from a full-scale military assault carried out by the Syrian regime is a real achievement. However, from a geopolitical perspective, Idlib — as the last territorial stronghold of the opposition armed groups — turns into a chess-board between Russia and Turkey. At first sight, it seems that Turkey played a vital role in preventing a potential unilateral Russian-Syrian military offensive and found a new opportunity to maintain the existing border of the Idlib region; to consolidate its military presence through the extension of its military outposts, and to protect moderate opposition groups’ territorial control. However, the question of how Turkey will be able to deliver its gains on the ground is an open question and depends on how Russia thinks about the future of Idlib at the end of the expiration date of the deal signed between Moscow and Ankara in Sochi. But the strategic importance of the Russian-Turkish dialogue is valuable to maintain the deal. More importantly, Turkey’s Idlib projection might bring many new dynamics not only for Ankara’s own calculations regarding its position alongside its Syrian border but also for the future of the Syrian crisis.

From a very rationalist perspective, Turkey has many challenges as well as opportunities in the post-Sochi agreement period regarding its entire Syrian strategy. Turkey has to deal with challenging tasks in Syria. Among them, preventing the PYD-PKK’s consolidation of military and political leverage across Syria is the most crucial one, while the U.S. continues to reshuffle its original strategy about the Kurds in the eastern part of the Euphrates river. Maintaining the territorial control of the Afrin-Azaz-Jarablus triangle and protecting the Free Syrian Army’s status in this region are the secondary objectives that Turkey wishes to achieve. Consolidating the Free Syrian Army’s position militarily and empowering the Syrian political opposition within the wider geopolitical struggle regarding the solution of the Syrian crisis is another challenge that Turkey faces. Idlib is located at the center of these geopolitical concerns of Turkey. Fighting against the PKK means fighting against the U.S. at the same time, and struggling for a secure place for the Syrian opposition on the table means a deal has to be made with Russia.

From the Turkish perspective, winning Idlib at this stage has many strategic values. First and foremost, preventing a possible humanitarian catastrophe provides Turkey a real advantage not only for its already-deepening refugee issue but also for its economy. Before the Turkish-Russian deal in Sochi, in case of a unilateral offensive, the UN announced that more than half a million people from the Idlib region would be displaced and move towards Turkey’s border. Under the current circumstances and changing public perception towards the refuges, this would bring real trouble into Turkish politics, particularly before the upcoming local election. More importantly, during the time of economic uncertainty of the country, the refugee flow would bring the extra cost for the Turkish economy.

The second one is significant regarding the protection of human life from a full-scale military operation. In the post-Astana process of the Syrian crisis, Turkey has been consolidating the Syrian opposition under the umbrella of the Free Syrian Army. The FSA played a vital role during Operation Olive Branch and Turkey could maintain its military presence in the Afrin region with the assistance of the FSA and restructured the very nature of the local politics there throughout the mobilization period of the FSA. In the post-Astana process in Idlib, Turkey did the same thing without clashing with any radical armed groups and regrouped the moderate armed group under the umbrella of the National Liberation Army. The deal which has been agreed upon between Turkey and Russia means that Turkey can maintain the existing territorial management of the moderate armed group and that it also gets to keep its military posts in Idlib. If Turkey can manage to disband and dissolve the radical groups on the ground, such as the HTS, then it can keep maintaining its control over the Idlib region to consolidate its political leverage in the Syrian crisis for the foreseeable future.

The third strategic value for Turkey is to protect Turkish-Russian dialogue on the ground. Turkey and Russia have been closely working since the Astana initiative started. Even though the two countries do not fully agree over the Syrian crisis since they have been supporting different parties, both sides can compartmentalize their tactical and operational priorities on the ground. The Idlib deal represents that both countries agree on a full-scale military solution would prolong the war itself. More importantly, losing Turkey at this stage would bring a new wave of uncertainty for Russia in the Syrian crisis. Even though the roughly one-month time frame for Turkey to dissolve the radical group is not enough, the strategic dialogue between Russia and Turkey can provide an extension to do this objective.

When taking the dimensions above into consideration for the new Idlib deal, Turkey also gets to keep its role in the Syrian crisis. Controlling remarkable territories alongside its borders with its armed forces in the opposition armed groups’ presence, Turkey is still playing a vital role for the future of the Syrian crisis in the international arena. At this stage, the most important objective for Turkey is to solve the potential radicalization of the armed groups. If Turkey can deliver its objective, then it can keep its overall position in the Syrian civil war.