Arab rulers don’t understand the reality that they are shooting themselves in the foot by pursuing Israel’s support to secure their fragile thrones. 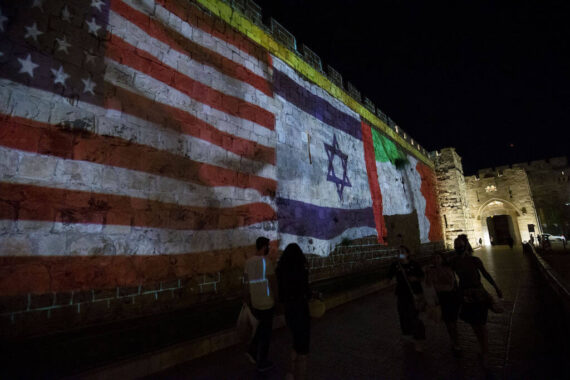 Flags of the United States, Israel, the UAE and Bahrain are projected by the authorities on the walls of the Old City after UAE and Bahrain's normalization agreement with Israel were signed, in Jerusalem on September 15, 2020. Photo by Mostafa Alkharouf, Anadolu Images

Although Donald Trump’s presidency is coming to an end soon, one of its most catastrophic quid pro quo foreign policies in the Middle East, namely the premature Israeli-Arab normalization, is unlikely to come to an end under Joe Biden’s administration. After all, Biden is a proud Zionist and a close friend of Israel. In August 2020, he hastened to applaud formally the UAE-Israel normalization deal and even took credit for paving its way.

There is, however, a notable difference between the two administrations. Under Trump, his son-in-law Jared Kushner has been tirelessly pressing Arab regimes not only to formalize and make their clandestine relationships with Israel public, but also to besiege the Palestinians economically, to bash their struggle in state-owned media, and to incite troll armies against them.

The Saudis under Crown Prince Mohammed bin Salman (MBS) have been the clearest example of this malevolent endeavor. For instance, recently, a prominent Saudi prince, Bandar bin Sultan, whose son and daughter are the Saudi ambassadors to the U.K. and U.S. respectively, made a lengthy appearance on the Saudi TV channel Al-Arabiya in which he spared no effort at demonizing and dehumanizing the Palestinians.

While Biden’s administration is expected to continue to facilitate talks between Israel’s right-wing government and authoritarian Arab regimes, it’s unlikely that Biden would demand similar proof of loyalty from Arab dictators, given that he acknowledges the importance of the Palestinian Authority – not least of all to Israel’s security.

This was promptly reflected by a decline in Emirati trolling of Palestinians when Biden was announced as the winner of the 2020 elections. In no time, the UAE officially praised Biden, even though they engaged in unabashed and open cheering for Trump during the campaign and vote count.

Even UAE ruler Mohammed bin Zayed’s close subcontractor and former Fatah strongman Mohammed Dahlan was quick to call Biden’s win a “positive development that limits the extreme risks of the Trump-Netanyahu alliance.” This comes after Dahlan has been supportively silent on the normalization frenzy, and also after Trump’s ambassador to Israel let slip that Dahlan is their favorite substitute candidate to lead the Palestinians, before withdrawing the remark.

Meanwhile, the Saudi regime, which was waiting for Trump’s reelection to normalize relations with Israel, is now in a tight corner. It took Riyadh more than 24 hours to come out with a short congratulatory message for Biden, while Saudi trolls have continued actively bashing Palestinians and fawning over Israel.

MBS, the man Kushner helped “put on top” of the Saudi regime, believes that Biden’s presidency is a direct threat to his survival in power, his war in Yemen, and his blockade on Qatar. The Saudis are, therefore, desperate to avoid an hour of reckoning over MBS’s unconstrained crackdown on dissents – including his own family. Hence, Saudi trolls hope that by bashing Palestinians to showcase loyalty to Israel’s right-wing in politics, Benjamin Netanyahu might intervene again to rescue MBS, as he did when Jamal Khashoggi was murdered in the Saudi Consulate in Istanbul. Simultaneously, the Saudi government recently and abruptly enacted nominal socioeconomic reforms in support of migrant workers to showcase openness toward moderation.

Tunisians shout slogans while holding a banner during a protest against United Arab Emirates' (UAE) and Bahrain's deal to normalize ties with Israel, at Habib Burgiba Street in Tunis on September 15, 2020. Photo by Yassine Gaidi, Anadolu Images

The Motives behind Normalization

The groveling of Arab regimes to Israel’s right-wing politics makes clear the shameful logic that motivates selling out their fellow Palestinians and the consequences of these desperate actions.

There are two motives for the Arab regimes’ desperate efforts to normalize relations with Israel. First, there’s a transactional motive in which reactionary and repressive Arab regimes, such as the UAE, in return for normalization are hoping to get more cutting-edge technology (e.g. spyware, military equipment) from the U.S. and Israel to help them protect and bolster their thrones, boost their regional hegemony, and crackdown more efficiently on dissents, such as critics, activists, and human rights defenders.

The second motive is purely ideological – and this is where the danger lies. Gulf regimes, particularly the Saudis, blindly believe that the way to Washington begins in Tel-Aviv “because Jews control the world” as one Saudi diplomat once told the present author on the condition of anonymity. Unfortunately, Trump’s quid pro quo foreign policy has been adding fuel to the fire, bolstering this misguided belief that Israel is the gateway to please Washington and that seeking legitimacy from Netanyahu and the White House, rather than from their own people, is the way to stay in power.

This ideology of looking up to Israel for salvation and legitimacy not only undermines whatever prospects remain for Palestinian statehood and self-determination, but it also ignites a strong backlash against the protagonists of this sellout for abandoning decades of Arab consensus.

Traditionally, normalization could take the shape of a reward, such as in the 2002 Arab Peace Initiative, in which Israel is recognized and integrated regionally after ending occupation, but the API has been stagnant for decades.

Normalization can also be an incentive to rebuild trust and create momentum for progress towards peace, but before any specific advances are signed and sealed. A prominent example is when Egypt’s president Sadat visited Israel’s Knesset in 1977, but such charismatic leadership (albeit still controversial) is absent today in the Arab world where most leaders have lost their legitimacy in the eyes of their populations after the Arab Spring. Additionally, the UAE-Saudi axis is entirely uninterested in pushing progress forward on the Palestinian front. Hence, they purposefully made no mention of the occupied Palestinian territories in the Abraham Accords.

There is also popular normalization, where direct people-to-people initiatives may have a potential of making a breakthrough. The underlying idea is to build peace from the ground up, building trust face-to-face, in parallel with the activities of the political elites, to show the authentic acceptance Israel would receive, should it end its occupation. But this avenue is heavily undermined by the brutalities committed every day under Israel’s occupation and the severe marginalization of Israel’s peace camp by the current government under Netanyahu.

The current normalization frenzy has created a fourth paradigm that embraces the humiliating, defeatist path of normalizing relations with Israel regardless of, and untethered from, any progress on the Palestinian front. This new paradigm is more akin to a diplomatic conquest than to anything else.

So instead of Israel needing Arab recognition of its existence to secure its future, now it’s defeatist Arab dictators that are scrambling for Israel’s approval to secure their fragile thrones. This has allowed Netanyahu to portray himself as a strong conqueror who’s opening one Arab front after the other at no cost.

Netanyahu has been keen on making visible his ability to twist Arab leaders’ arms, humiliating, if not forcing them into submission. When the UAE-Israel normalization deal was announced, the UAE claimed that it would stop annexation. However, Netanyahu hastened to take to the stage to brag that annexation is still on the table.

By cozying up to Israel to bolster their power, Arab regimes are essentially shooting themselves in the foot. Defeatist normalization has portrayed those regimes as fragile, illegitimate, and desperate to secure their thrones by paying tribute to “King Bibi” and President Donald Trump.

This is a surefire recipe for eventually normalizing even more hate and violent rejectionism towards those regimes. Indeed, 90% of the Arab world on social media have been against normalization. Netanyahu himself understands this clearly. He admitted that the biggest threat to normalization is grassroots Arab opposition: “The greatest obstacle to the expansion of peace today is not found in the leaders of the countries around us. The obstacle is public opinion on the Arab street.” Arab rulers don’t seem to understand this reality. They don’t understand that they’re ostensibly shooting themselves in the foot by pursuing Israel’s support to secure their fragile thrones.

Also Read
Could Blockchain Be a Real Game Changer?