Yellow Vest Protests and the Constraints of Modern Democracy

The yellow vests uprising is not an identity movement. This very aspect is the actual threat posed against the state since they seem to have lost their belief in politics, democracy, law and the system in general. For this reason, there is no party or union active in the protests. 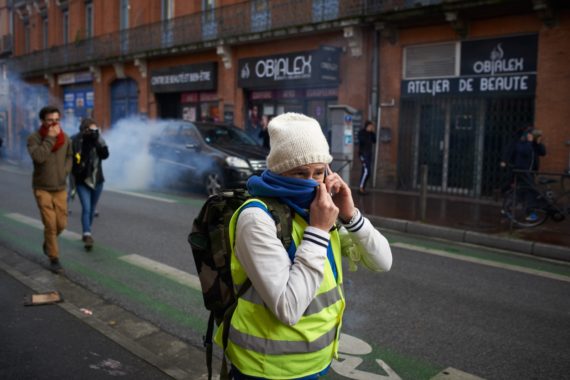 A Yellow Jacket paramedic tries to locate the paramedic crew after a volley of tear gas canisters. In solidarity with the Yellow Vests, highschool students took again to the streets of Toulouse. Getty Images

The latest “Yellow Vest” protests did not break out all of a sudden. Since 2016, yellow vests have been mandatory in all French vehicles for cases of breakdowns or accidents. And lately, thousands of French people poured into streets by wearing these luminous vests to speak out about the serious breakdown in the system.

The fact that the French pay the highest prices for fuel across Europe is not the sole reason. And it is not only because the Macron government increased diesel prices by 20 percent as of the new year despite the general decline in oil prices, or because the 23 percent and 15 percent raises planned for diesel and gasoline prices under the name of “green tax.” If this were the whole issue, the surveys would not show that around 80-85 percent of the French find the Yellow Vest uprising rightful, which started on November 17 with the protests of around 300 thousand people. Or, when the government stepped back or at least postponed the price rises for 6 months, they would halt the protests in the midst of wintertime. However, they announced that they will continue, stating that while the government is offering them crumbles, they want bread.

The notion of democracy they embraced seems to have reached its limits, and now people see the streets as the only viable solution, which is dangerous although valorized in French history, especially in the current context.

This case cannot also be explained solely through macroeconomic figures and their results. It is true that the public debt of France reached around 99 percent in proportion to gross national product, whereas foreign debts reached 461.5 billion Euros. It is claimed that the Macron government tries to manage the internal debt through the taxes levied ostensibly for environmental concerns. The tax cuts from salaries climbed up to 37 percent whereas tax reduction is implemented for large companies and the wealth tax levied on the wealthy were abolished. But they are not enough to explain the uprising. Neither can it be explained through the amendment in the working law that would make dismissals easier in France, which is one of the strongest social states with solid job guarantee presenting the most favorable working conditions.

Of course, the French complain about all of them, but these aspects are not enough to explain the despair prevailing France. Formerly, people used to believe that a new government could resolve the problems with a change in political choices, which is no longer the case. Although far-right groups are the leading ones giving the quickest and sharpest reactions; people have realized that the situation will not change whether socialists or right groups take over governance.

According to reports issued by a global management consultancy company, in some industrialized countries and in five European countries including France, millions of people, both blue-collared and white-collared, will permanently lose their jobs.

Thousands of people from various backgrounds took the streets for different motivations. They mostly comprise the people living in the peripheries of metropolitan cities. They are not the poorest of the country. Even in the cities and towns with lower income levels, those taking to the streets do generally have their own houses and cars. It is not a rural movement against the urban, either. They are furious at having to pay extra costs but they are not anti-environmentalist. Muslims or blacks are not the preeminent groups in protests. Contrarily, most of them are white French people, and according to surveys, more than 50 percent of them have right-wing allegiances. But this is not an identity movement, as they suggest that they are apolitical. This very aspect is the actual threat posed against the state since they seem to have lost their belief in politics, democracy, law and the system in general. For this reason, there is no party or union active in the protests.

The yellow vests uprising is not an identity movement. This very aspect is the actual threat posed against the state since they seem to have lost their belief in politics, democracy, law and the system in general. For this reason, there is no party or union active in the protests.

In fact, the presidential elections divulged this situation. In the 2002 presidential election, Chirac’s vote share against Jean Marie Le Pen was 19.88 percent in the first round but he received more than 82 percent in the second round. Some dissident groups and media outlets, particularly socialists, propagated that Chirac was elected due to the fear of Le Pen and therefore he would reside in the Elysee Palace in the same manner as Queen Elizabeth. 15 years later, in 2017, the largest parties of both the right and left were defeated in the first round in the presidential elections that had 77 percent voter turnout, which was unprecedented.

In addition, with his newly-founded party, Emmanuel Macron received 24.1 percent vote, which was only 2.7 percent higher than Marine Le Pen’s vote share. In the second round, Le Pen received almost two times more votes than the votes her father received in 2002. So, even against the fear of Le Pen, Macron’s vote share was less than Chirac’s as he went through the elections by receiving 66.6 percent. Notwithstanding, Macron has never been looked down on as Chirac, but rather represented as a promising political figure that could save France and the EU by the current perception management tools. This is how tricky the post-truth world is!

Today, the presence of a system in which the elected governs the electorate has become a highly debated issue. Even the EU and its bureaucrats that stand as the scapegoat in this context can be considered innocent here. Since 2008, the forces of banks and finance centers have been slapping the masses in the face. People in the U.S. and Europe are aware of this fact. So, they believe that there will not be any difference no matter who comes to power in elections. On the other hand, even though they cannot fully comprehend that the dark process started with the Enlightenment four centuries ago and resulted in the mechanization of humans and humanization of machines, they can feel the darkness looming over in the air.

Everyone is apprehensive. This feeling has many manifestations, and one of them is this: According to reports issued by a global management consultancy company, in some industrialized countries and in five European countries including France, millions of people, both blue-collared and white-collared, will permanently lose their jobs. The notion of democracy they embraced seems to have reached its limits, and now people see the streets as the only viable solution, which is dangerous although valorized in French history, especially in the current context.

Also Read
Populism: The New Wave of “Magic” in Europe?
We use cookies to optimize your online user experience. To learn about our use of cookies and how you can manage your cookie settings, please see our Privacy Policy. By continuing to use our site you are excepting our use of cookies.Accept Cookies & CloseMore Info