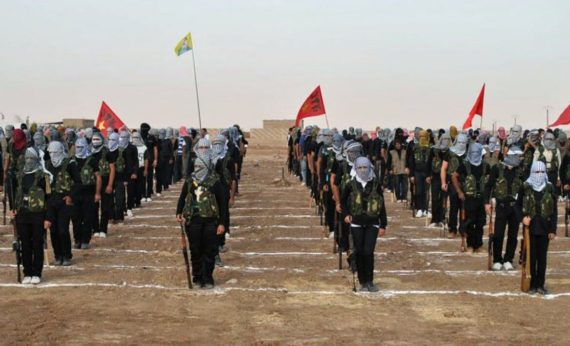 Turkey will no longer tolerate the presence of a terrorist group on its southern borders as the country’s leading figures recently announced their determination to start a military operation as soon as possible. As has been globally observed in recent days, the U.S.-backing of the YPG/PYD has decreased at the U.S. presidential level despite the heavy criticism and pressure from both the Republicans and Democrats. The following days will most likely involve a greater clarification of positions towards Turkey’s planned military operations.

Besides the operation’s potential scope and its military purpose which will be discussed in detail, it is interesting to observe that most of the U.S. and Western voices in general take a position that blindly supports the YPG, which is the Syrian branch of the PKK terrorist organization.

Turkey’s alliance with the U.S. and NATO has 67 years of history. The country has positioned itself long ago in the Western alliance, viewing it as a strategic partnership in the fight against regional and global terrorism. Given this, it is not understandable why most Western politicians, media representatives and social media users directly or indirectly prefer the YPG despite Turkey’s serious security concerns.

Turkey’s struggle against the PKK terrorism is disregarded. Instead, the U.S. and other Western democracies describe “Kurds” as friends or allies. Referring to “Kurds” instead of the more accurate YPG/PKK, reinforces a false narrative because not every Kurdish person is a YPG/PKK member or supporter, and further implies that opposition to the YPG and PKK is in reality opposition to the Kurdish people themselves. The more accurate question is whether the West has ever truly been friends of the Kurdish people when they have themselves been facing PKK terrorism for more than 35 years. But this reality is ignored when PKK propaganda in the form of political liaisons with PYD/YPG is widespread.

Unfortunately, this attitude is of fundamental concern and should not be ignored while Turkey conducts military strikes in the upcoming days. There should be research to discover the roots of Western and even some domestic support for the PKK. This issue is perhaps not well addressed today, but for future readers and researchers, it is important to understand the current positions of Western democracies, their media and even their civil representatives in favour of the PKK/PYD.

How it is possible that democracies and their media hide, disregard, downplay the activities of a neo-Marxist and ethnic-separatist terrorist organization? How can a terrorist organization such as the PKK, which is regarded as a prohibited terrorist organization both in Europe and the U.S. enjoy comfortable support by Western powers? This happens despite several reports, opinion pieces, studies, and interviews with experts from the Western world that prove the obvious connection between the PKK and PYD/YPG.

I doubt that a realism-based approach is able to explain such irrational positions. Furthermore, the preferred arguments that “defeating Daesh terrorism has to be the priority” does not answer why a terrorist organization such as the YPG is actively preferred by Western policymakers and even supported by civilians in order to fight another terror organization such as Daesh. Actually, this narrative has been reiterated for more than six to seven years and therefore more people in the West are inclined to play down the PKK’s actual role as a terrorist organization while disregarding the fundamental concerns of an ally.

The direct or indirect support of the PKK through its offshoot in Syria has perhaps functioned until now but it is clear that this blind stance will not guarantee a long-term approach. It is not acceptable that an ethnic-separatist and neo-Marxist terrorist organization is normalized.

In Turkey, there is one political party, the HDP, and only a few supporters from among radical Marxist groups that declared their support for the YPG. Turkey’s main opposition party, the CHP’s current stance is not to support a Turkish military strike openly against the YPG in Northern Syria. But this should not confuse observers. Although there are sympathizers of Kurdish separatism among the ranks of the CHP administration, the party rejects the existence of the YPG/PKK and supports the fight against it. This also counts for all other terrorist groups no matter what their political agendas are. A high majority of Turkish citizens oppose the PKK/PYD, Daesh, FETO and all other terrorist groups, and this is a stance which should be reflected in the allies of Turkey, which at the moment appears to only be Spain.