Evidence of the terrorist YPG/PKK using young children uncovered in the Turkish-led operation in Syria’s Afrin region confirms what many international rights watchdogs already reported: the terrorist recruitment of minors. 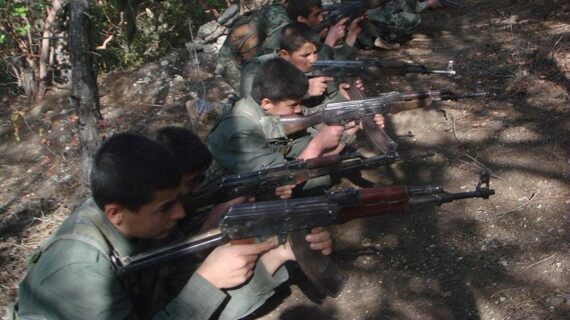 Evidence of the terrorist YPG/PKK using young children uncovered in the Turkish-led operation in Syria’s Afrin region confirms what many international rights watchdogs already reported: the terrorist recruitment of minors.

The memory cards of cameras seized during the ongoing Operation Olive Branch in Syria’s Afrin region, launched on Jan. 20 against YPG/PKK-Daesh terrorists, show children — age 13-17 — bearing arms, training with weapons, and living in poor conditions in the mountains.

According to the report, children under age 15 took part in fighting, staffed checkpoints, and cleaned and prepared weapons.

The 2014 U.S. State Department Human Rights Report also said the terrorist PKK — the YPG/PKK’s parent group — regularly recruited children in the past, though the number of child soldiers recruited by the PKK that year was unknown.

The report also said PKK had kept up abducting and conscribing young people, adding that it was not generally clear whether they joined by force or volunteered.

Families of allegedly abducted children staged several protests during the year demanding the terror group free their children, it added.

In 2015, the U.S. Trafficking in Persons Report said Kurdish children were sometimes kidnapped and forced to participate in PKK forces, according to uncorroborated reports.

In the 2016 report, the U.S. said the YPG/PKK continued to recruit and use boys and girls, including children younger than 15.

According to the report, the YPG/PKK reportedly took the children to indoctrination and training camps.

In April 2015, a 16-year-old girl in Aleppo was allegedly recruited by YPJ/PKK female terrorists against the wishes of her family, said the report.

The forced recruitment of children by the YPG/PKK was also documented in reports of German-based Kurdwatch.

In a May 2015 report, Kurdwatch said the PYD/YPG/PKK kidnapped 12-year-old Fatimah S.A.

Quoting a family member, the report said: “The girl simply disappeared. Her parents are PYD supporters. However they weren’t asked if they wanted to send the girl to the military.

“The YPG claims that the girl decided by her own free will. Her parents were not even allowed to accompany their daughter. They were promised that after two weeks training, Fatimah would be allowed to return if she wants.”

According to the International Criminal Court, the enlistment and conscription of child soldiers under age 15, as well as using them to participate actively in hostilities, is a war crime.

According to the Turkish General Staff, Operation Olive Branch aims to establish security and stability along Turkey’s borders and the region as well as to protect Syrians from terrorist oppression and cruelty.