A Muslim Chancellor in Germany?

In response to Ralph Brinkhaus' statements on the possibility of having a German Muslim Chancellor, Germany's Bild stated: “A Muslim as CDU Chancellor? Then delete the C in your name.” 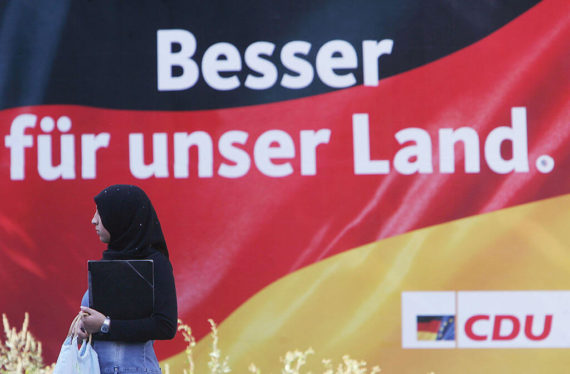 A Muslim woman wearing a headscarf walks past an election campaign billboard by the opposition German Christian Democrats featuring a German flag and the slogan: 'Better for our Country' September 6, 2005 in Berlin, Germany. Getty Images

Germany has a lot of domestic problems that the government and each responsible federal office have to face. No day passes without a new superficial dispute focusing on Islam and Muslims living in Germany arising on the top of the political agenda. There have already been similar disputes in the recent years on whether Islam belongs to Germany or not, and additional issues related to Muslims and their general lives, participation, and preferences in Germany. Throughout last year, I addressed some of these topics as well (I>; II>; III>; IV).

In compliance with this unfortunate trend, a new debate was triggered when Christian Democratic Union (CDU) parliamentary group leader Ralph Brinkhaus stated in a recent interview that a Muslim could be a future CDU leader and the Chancellor of Germany. The interview was published in February, when Brinkhaus stated that there wouldn’t be any problem if a Muslim, who is a good politician and who represents their party’s values and political views, becomes CDU chair and even Chancellor. One might initially think that this represents quite a liberal stance, which is in compliance with the German constitution. However, last Wednesday, Germany’s most read paper, the Bild, published these statements with the title “A Muslim as CDU Chancellor? Then delete the C in your name.”

Ralph Brinkaus’ words therefore shocked various CDU members, while others had some courage to support this reasonable stance. Those that opposed the idea of a Muslim chancellor stressed the so-called incompatibility of Islam with CDU values. On the other hand, Muslim CDU members, and the only Muslim on the party’s executive board, Mrs. Guler, stated, “anything other than what Brinkhaus said doesn’t belong in a mainstream party or one that takes the constitution seriously.” By mentioning a “mainstream party,” she implied the CDU. Though, the weirdest statement came from CDU MP Eberhard Gienger, who openly dismissed the idea of a Muslim becoming Chancellor by arguing that “having a Muslim chancellor would imply that Muslims would constitute the majority in Germany … This is not the case.” According to this sectarian position, one would assume that all non-Christians, Muslims and Jews in Germany don’t vote for any party because they are dominated by Christians. This is not the case. The center-left coalition partner of the CDU, the Social Democrats (SPD) also criticized the entire debate by describing it as “completely idiotic.”

In response to Ralph Brinkhaus’ statements on the possibility of having a German Muslim Chancellor, Germany’s Bild stated: “A Muslim as CDU Chancellor? Then delete the C in your name.”

Regardless of the question as to whether German parties or society in general has connections to Christianity as a religion, it has to be mentioned once again that pious Muslims are generally excluded from political participation in Germany and across Europe. In this sense, a report titled “Political Engineering and the Exclusion of Religious Conservative Muslims in Europe” revealed that “even the existence of Muslim-origin representatives in various European parliaments does not translate into advocacy and support for Muslims’ religiously specific rights, needs and demands.” In Germany in particular, even though there is a so-called “descriptive representation” of Muslims in politics, this does not mean an actual representation of particularly pious Muslims in German politics – despite the large and majority determining numbers of these German Muslim citizens.

Before elaborating or commenting on the possibility of a future Muslim chancellor, facts such as the increasing Islamophobic discourse have to be considered. For instance, it is unfortunately obvious that in some regions in Europe, Islamophobic behavior has increased in the last years up to a rate of 70-80 percent.

If there is a concrete and sincere intention to facilitate the conditions of political participation for German Muslims, all mainstream parties could start by opening their doors to this group of people.

As an interesting comparative stance, with regard to the recent dispute over a potential Muslim chancellor, a German politician with Palestinian roots asked the Bild daily on social media whether they would write such a comment if Ralph Brinkhaus had said he can imagine a Jewish chancellor? Would the Bild daily then also advise the CDU to delete the “C” from its name?” Most likely not. In a similar critical way, a journalist pointed to the U.K. as a comparison, where the country’s London Mayor and Interior Minister are both Muslims, whereas his comments received harsh criticism from German rightist circles on social media in the form of complaints to Twitter.

Thus, one has to keep in mind that there are definitely no legal obstacles in front of a Muslim German citizen to become a successful politician or the future chancellor. Germany’s constitution does not exclude such a possibility and the legal conditions in Germany do not differentiate between Muslims, Christians, or Jewish citizens. Such discussions about the “rejection of a Muslim chancellor,” unfortunately, only deteriorate the already tensed societal mood and existing prejudices. But if there is a concrete and sincere intention to facilitate the conditions of political participation for German Muslims, all mainstream parties could start by firstly opening their doors to this group of people. Only focusing on and preferring specific groups who do not represent the interests of the majority of Muslims cannot solve anything.