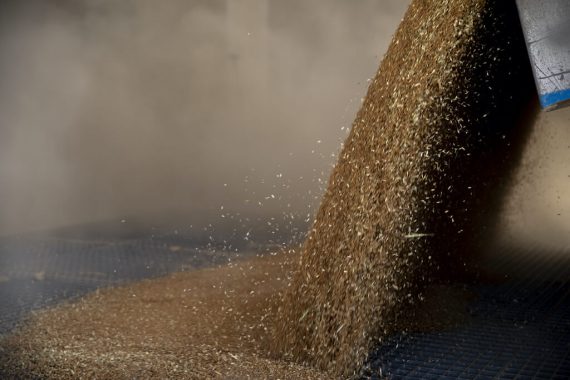 Wheat brought by trucks is kept in warehouses and silos in Erbil, Iraq on May 29, 2022. Photo by Ahsan Mohammed Ahmed Ahmed, Anadolu Images

With the Ukrainian ports blocked for three months, the “bread wars” began in Africa. States whose food supply security depends on imports are nowadays facing similar situations even more so as they face the worst food crisis in living memory. Many of them predictably hope Russian President Vladimir Putin will soon reach an agreement with Ukraine to stop the war and prevent the food crisis.

The Russian leader is accused of blocking exits from major Ukrainian ports since the beginning of the war and has been asked by the West to remove barriers hindering access to ports in order to resume the export of Ukrainian grain to the rest of the world. Approximately 15 million tons of grain are reportedly blocked in the ports of Ukraine, which currently accounts for nearly 10 percent of the world’s wheat trade. The war has interrupted international shipment of wheat, causing acute famines and increasing prices globally.

According to the report by the World Food Program released in early June 2022, the ongoing Russia-Ukraine war has forced more than 20 million people in Africa to suffer acute food shortages. With the start of the war, the situation worsened when, the Port of Odessa, the main port for agricultural exports, was blocked by Russian troops. The report warns that if emergency aid is not provided to several countries in Africa, the region will enter a further stage of famine. While the number of people suffering from hunger has quadrupled in the last two years in Kenya, more than 700,000 people in Ethiopia need urgent food aid every day.

Before the outbreak of the Russia-Ukraine war, the food supply security crisis was eminently in the making due to climate change and the COVID19 pandemic. Now, the grain crisis and states’ protectionist self-sufficiency policies rub salt into the wound.

Ukraine’s wheat export is interrupted by Russia. China, which has 51 percent of the world’s wheat stock, increased its own stocks by 20 percent. The world production of wheat increased  by 8 percent (from 732 to 790 million tons) in the last four years but, at the same time, stopped its wheat export.

The picture is not entirely that grim. The outlook for global food supply remains positive. But the food prices have risen sharply due to higher shipping costs and trade cuts because of the war, as well as the rising import of inputs such as fertilizer prices and thus import bills. This affects the world’s poorest countries and developing countries the most.

As of June 1, 2022, the Agricultural Price Index dropped by 5 percent within two weeks, but is still 40 percent higher than in January 2021. Compared to January 2021, corn and wheat prices are 42 percent and 60 percent higher respectively, while rice prices are about 12 percent lower because of increasing supply or no important crises occurring in rice-producing regions/countries. On the Chicago Mercantile Exchange, wheat price rose by 41 percent from $0.27 per kilo in the beginning of 2022 to $0.38 as of June 20, 2022.

Many countries are experiencing high food price inflation at the retail level as a result of labor shortages, sharp rises in fertilizer prices, currency devaluations, and other factors. Rising food prices have a greater impact on people in low- and middle-income countries, as they spend a larger portion of their income on food compared with people in high-income countries.

Food prices have been high before, and the war is driving food prices even higher. The most affected commodities are wheat, corn, edible oils, and fertilizers. Global commodity markets face upside risks from reduced grain supply, higher energy prices, higher fertilizer prices, and disruption to trade due to the closure of major seaports such as Pivdennyi, Odessa, Mykolaiv, and Chornomorsk, which account for about 80% of the total throughput of Ukrainian seaports.

After the start of the Russia-Ukraine war, trade interventions by countries increased. From January to early June 2022, 268 policy measures were announced and implemented by 75 countries. The number of policies regarding food and fertilizers stood at 85 percent of trade interventions, while the percentage of policies regarding raw materials and fuels stood at 15 percent.

Globally, hunger levels continue to rise at an alarming rate, with close to 193 million people reportedly having experienced severe food insecurity in 2021. According to the Global Report on Food Crises, it is predicted that by the end of 2022, all figures will be exceeded, and approximately 40 million more people will suffer from food insecurity compared to 2020. Surveys recently conducted in 83 countries to detect the effects of the recent food crises show that a significant number of people run out of food or already reduced their consumption in the first two years of the COVID19 outbreak.

Putin noted that there are several ways to export grain to the Danube River and then Romania, Hungary, and Poland via the Ukrainian-controlled ports of Berdyansk and Mariupol. He also called for “clearing” the waters of mines around the ports held by Ukraine, saying that the ports under the control of Kiev, especially Odessa, could also be used. However, he added that the simplest, easiest, and cheapest way to transport agricultural and food products to the Baltic ports is by exporting them through Belarus and from there to any part of the world. But, he added, exports via Belarus would be conditional on the West “lifting sanctions” against Minsk.

On the other hand, UN Secretary-General’s spokesperson Stéphane Dujarric said that he is trying to reach a “package deal” to restart Ukraine’s food exports and Russia’s food and fertilizer exports, adding that the situation is volatile. Dujarric also said that with the Secretary General and UN staff, they will go wherever is needed to finalize this project.

It has been stated that the United States is ready to issue “letters of relief” to grain and fertilizer exporters and insurance companies to get much-needed agricultural products out of Russia. The U.S. supports the UN’s efforts to allow grain exports from Ukraine by train and via the Black Sea, as well as to ensure the unrestricted access of Russian food and fertilizers to global markets.

Around 30 percent of the wheat traded across the world is produced in Russia and Ukraine. Dozens of container ships are stranded in Ukrainian ports, surrounded by Russian forces and protected by mines, preventing the transfer of wheat, sunflower oil, and other goods, as well as agricultural fertilizers.

President Putin reiterated to President Erdoğan that the Kremlin would support “unhindered” exports of Ukrainian grain from ports, but demanded the lifting of the Western embargo on Moscow in return. The meeting between the Turkish and Russian leaders reveals that Russia is ready to export large amounts of fertilizers and agricultural products if the Western sanctions are lifted.

Read: Self-Sufficiency and Complex Interdependence in the Age of Global Crises

Russia’s foreign minister Sergei Lavrov repeated Putin’s offer to end the blockade of grain supplies in the Black Sea. “If the demining problem is resolved, the Russian Federation naval forces on the high seas will ensure the unhindered passage of these ships to the Mediterranean.” He added that the risks of the global food crisis increased in many countries, especially developing countries, and that the U.S. and EU sanctions were responsible for the cuts in the grain supply.

After meeting with Turkish Foreign Minister Mevlüt Çavuşoğlu, Lavrov said that the wheat coming from Ukraine corresponds to only 1-2 percent of the world wheat production, therefore there will be no crisis and Ukraine is almost holding the ships hostage. He emphasized that they appreciate Turkey’s efforts to open these grain-filled ships to world markets.

Ankara is in talks with Kyiv and Moscow to build a corridor for grain shipments from Ukraine via Turkey. Following a phone call with Putin, Erdoğan announced that he is ready to organize a quadrilateral conference between Ukraine, Russia, Turkey, and the United Nations in Istanbul. Erdoğan also spoke with Zelenskyy about future negotiations between Ukraine and Russia, as well as maritime export routes.

In his statement, Çavuşoğlu said that the work with the UN for the agreement on the transition from the Black Sea continues along with the tension between Moscow and Kyiv. He said that the UN recommended developing a joint monitoring body to monitor the shipping route and that Turkey is open to this. He also stated that Russia wants some Western sanctions on the insurance sector to be eased as this will affect the ships that will be a part of the possible maritime network, while Ukraine does not want Russian ships to approach the Odessa facilities.

In Turkey, where food inflation stands at 91.6 percent, well above the 73.5 percent general inflation rate as of June 2022, wheat production has decreased by 22 percent in the last six years. Wheat prices have increased more than three times in the past year due to price increases in the world, decrease in the wheat harvest, and very high inflation.

While Turkey’s agricultural support approached ₺30 billion in 2022, the share of support received by grain producers increased from 1/3 to 1/2. In addition to the increase in wheat prices and adequate rainfall, these increases are expected to increase the yearly wheat production from 17.5 million tons in 2021 to 19.5 million tons in 2022. These days, when the wheat harvest is imminent, the yield estimates from the field confirm this target.

Since Turkey manufactures and exports flour and bakery products from imported wheat in addition to domestic consumption, it needs affordable imported wheat. Turkey’s Minister of Agriculture and Forestry Vahit Kirisci announced that an agreement was reached with Ukraine to buy grains 25 percent cheaper. He also emphasized that Ukraine has a dilemma in terms of security and exporting products.

Considering that the world produces nearly 800 million tons of wheat and harvests have already started in the northern hemisphere, wheat to be exported from Ukraine will not be the sole cause or solution to the food crisis, except for the short-term crisis to be experienced by countries whose food needs are dependent on Ukrainian imports.

Despite this foresight, the efforts of the world community, international organizations, and Turkey to deliver agricultural and food products and fertilizer exports from Ukraine and Russia to the world markets should continue.

One of the viable solutions to prevent the food crisis that is imminent and possible food crises in the future is to liberalize international trade of agricultural and food products as much as possible by reducing or even removing obstacles instead of imposing protective trade policies.

The U.S. export embargo on Brazil in 1973 and on the USSR in 1980 made the two countries the leading producers of soybean and wheat respectively. Many countries will turn the crisis into an opportunity in agricultural production.