Self-Sufficiency and Complex Interdependence in the Age of Global Crises

Given the ever-increasing complexity of interdependence, food self-sufficiency is no longer a possibility. 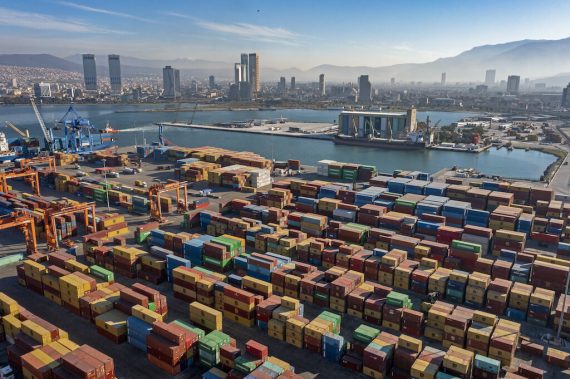 The Port of Izmir in 2021, Turkey. Photo by Mehmet Emin Mengüarslan, Anadolu Images

In response to the pandemic, many governments initiated national vaccine development programs and increased their efforts towards self-sufficiency in healthcare technologies. As the global shipping slowed because of COVID19-related restrictions, manufacturing industries were also urged to relocate their factories from China to the United States and Europe.

At the beginning of this year, many thought the pandemic would be over soon and we could go back to some form of normalcy. But when the pandemic slowed down, Russia’s invasion of Ukraine shattered the hopes for return of normalcy to global economy and politics. Analysts caution that the war in Ukraine may spread to neighboring countries and pave the way for a world war. The global economic stability is also endangered by conflict, as many European nations, particularly Germany, depend on Russian natural gas for their energy needs.

The economic sanctions imposed on Russia by the West seek to trigger a regime change in Russia. However, thus far, the sanctions only led to Russia’s introduction of the export bans on some of its minerals and agricultural products, which hurt both Russian companies and the importers of their products.

The overall picture is thus one of tit-for-tat between Russia and the West, and the result may be the end of globalization and concomitant interdependence of the world economy. There is no doubt that the COVID19 pandemic and the Russian invasion of Ukraine weakened global interdependence as a norm and brought self-sufficiency to the forefront.

Some asserted that interdependence creates opportunities for the virus to spread, and governments reacted by trying to tilt their direction towards self-sufficiency. In the end, that attempt failed as nations realized how much they depend on global tourism, and need components and products to be delivered across the borders to continue manufacturing goods and producing services that are key to their welfare.

The international collaboration of the German BioNTech and the American Pfizer in producing the world’s first vaccine against COVID19 was an excellent example of the “complex” interdependence that existed in the global economy. The partnership of the two companies was born out of a mutual need, the former developed the vaccine but lacked the global distribution capacity, which the latter provided. The calls for self-sufficiency were quite common in the first phase of the pandemic, but the reality of complex interdependence hit quickly and global economy gradually returned to its normalcy.

The war in Ukraine was not unexpected; a full-fledged war between Russia and Ukraine was anticipated since the annexation of Crimea by Russia in 2014. That is why most commentators agreed that the EU should have prepared itself to cope with its dependence on Russian gas, and energy self-sufficiency should now be prioritized by the union. But this argument only holds if we assume that Russia is not dependent on the West, ignoring its dependence on European trade and goods.

Between the EU and Russia there existed some form of complex interdependence as each needed the other for something which may either be costly or inaccessible if sought from elsewhere. The removal of Russia from SWIFT and the withdrawal of Western companies and investment from the country are all towards disentangling Russia from the cobweb of complex interdependence, which will inevitably hurt both the Russians and their trade partners.

In short, there is no winner in moving towards self-sufficiency, both Russia and the West stand to lose. Disintegration of the liberal political and economic order of the world would lead to economic stagnation and political upheaval, the complex nature of the existing economic and political relationships cannot be undone in an efficient and peaceful way.

The response to Russia’s invasion of Ukraine should target the Russian elites but not seek to exclude Russia from the global economic architecture. Sanctions such as SWIFT and Western companies’ withdrawal from the Russian retail market are counterproductive. Sanctions targeting ordinary people usually prove ineffective in authoritarian regimes and rather serve as justification of the governments’ self-sufficiency efforts.

Most efforts seeking to replace the complex interdependence at the international level with self-sufficiency at the national level are doomed to fail. The level of complexity has increased dramatically since the concept was first coined. Compared to the 1970s, today’s world relies on electronic devices, for instance. All electronic devices, such as computers and smartphones, are built with microchips and powered by sophisticated software. The design and manufacturing of the microchips and software are progressing so fast that no country can dominate either field or fully control both sectors.

Food self-sufficiency is also no longer a possibility; many nations currently have a much more reduced amount of arable land than they had in the 1970s and larger populations which make them ever more reliant on each other to feed their population. In brief, given the ever-increasing complexity of interdependence, even in the times of global crises, self-sufficiency cannot match the level of well-being provided to us by the sophisticated global economy.

Özker Kocadal is an assistant professor of international relations at Cyprus International University. He holds a PhD in politics from the University of Exeter. His research focuses on peaceful resolution of intrastate conflicts, particularly mediation and peacebuilding, as well as middle power politics, international migration, and politics of surveillance technologies.