A Superficial Alliance Between the Opposition Parties?

After the announcement of the alliance, supporters of the Felicity Party criticized the cooperation of their party with the CHP on social media. Especially the CHP’s historical discourse on women that wear headscarves came to the prominence again. 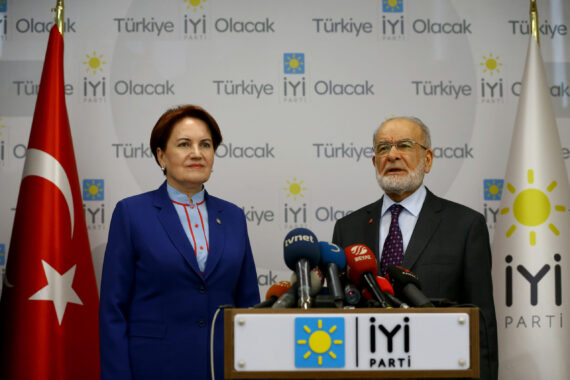 After long-during discussions, Turkish opposition parties formed an alliance before the June 24 parliamentary elections. As it was called the “Nation Alliance,” this cooperation brought the CHP, Iyi Party, Felicity Party, and Democrat Party together. During the announcement of the alliance, it was also emphasized that candidates from the Democrat Party would run under the Iyi Party in elections.

These four parties have been negotiating a possible alliance for a couple of months. Indeed, the Iyi Party and Felicity Party came to an agreement on a partial alliance in the second run of the presidential elections if no candidate would win a simple majority in the first round. Nonetheless, when the decision of snap elections was taken, these parties accelerated their negotiation process. Even if all of these parties have different ideologies, principles, and system of values, they ignored such fundamental issues to form a superficial alliance against President Erdogan and the AK Party.

The CHP’s leading cadre and voters are split between nationalists/Kemalists and left-wing circles. The Iyi Party is supposed to get votes from nationalists within the CHP and MHP. The Felicity Party gets a few votes from the National Outlook Movement – most of the supporters of which vote for President Erdogan and the AK Party. Thus, there seems no realistic common ground or purpose of the opposition parties for the future of Turkey except removing President Erdogan from power that was tried in different forms in the past. This reality was seen in the declaration paper of the alliance. There wasn’t any reasonable justification or purpose of the alliance on paper. These parties also failed to explain how they were going to work in a harmony after the elections.

All of these elements show that this alliance is not an organic but an induced alliance. Does the formation of the alliance among the leading cadres of these parties reflect the will of their voters? The answer of this question is “no”.  After the announcement of the alliance, supporters of the Felicity Party criticized the cooperation of their party with the CHP on social media. Especially the CHP’s historical discourse on women that wear headscarves came to the fore again. Additionally, CHP voters heavily attacked the involvement of the Felicity Party in the alliance and denominated this party with the words such as “backward,” “reactionary,” and “followers of sharia.” These words show that radical secularists in the CHP still have the same mentality against religious people.

When it comes to the Iyi Party, the voter transferability between the CHP and Iyi Party seems to accelerate after this alliance. The angry nationalists in the CHP have already turned their face to the Iyi Party. However, some acts of the CHP’s presidential candidate Muharrem Ince may increase voter transferability between these parties on behalf of the Iyi Party. For instance, Ince’s call for the release of Selahattin Demirtas and his plan to visit Demirtas in jail have raised tensions among the nationalists in the CHP.

Overall, it is seen that the induced and superficial alliance among these parties could not mobilize their voters yet. It can be stated that these parties may take some actions towards mobilizing their voters in the last 49 days of the elections. At this point, it is important to remember that the context is highly crucial on voting behavior. As the alliance among these parties is not the result of an organic and well-thought process but simply aims to overthrow the government with no serious preparation to govern the country, they will most probably suffer to persuade their voters to vote for the Nation Alliance.