Almost a year after the U.S. withdrawal from Afghanistan, many governments still tie their recognition of the Taliban to its actions on the ground. 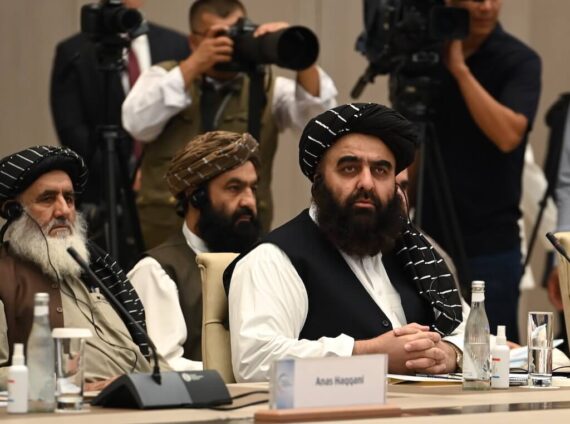 As the end of August marks a year since the U.S. withdrawal from Afghanistan, the Taliban remain unrecognized and desperately craving legitimacy.

Ever since the Taliban seized Afghanistan in August 2021, there was much speculation on the consequences of their recognition by regional powers. Countries like Russia, China, Iran, and Pakistan were considered the main beneficiaries of the U.S. withdrawal as they are more capable of filling the power vacuum.

But despite the hype, no country recognized the Taliban as the legitimate government of Afghanistan.

“We call upon regional and other countries, the United Nations, international organizations, and especially Islamic countries and organizations to recognize the Islamic emirate as a legitimate government, to have a positive collaboration with it, and remove all the imposed sanctions,” Mujib-ul Rahman Ansari, an Afghan cleric said during a three-day gathering of Afghan leaders on July 2, 2022.

Afghanistan is currently facing one of the worst humanitarian crises in its history. As poverty and economic crisis sweep through Kabul, lack of recognition makes it harder for Afghan people to survive.

Read: Can the Taliban Deal with their Handicaps?

Who has recognized the Taliban?

As recognition of the Taliban would improve trade relationships and enhance security cooperations, Afghanistan’s neighbors and regional players have demonstrated more interest in engaging with the group. However, many of the regional players have abstained from recognition and instead focused more on diplomatic talks. Countries like Pakistan, Russia, Turkmenistan, China, and Iran have quietly approved Taliban-appointed diplomats.

Being one of the first actors to take action, China expects the group to protect its interest in neighboring countries. It is also concerned about the Belt and Road Initiative which runs through Afghan territory. For other countries like Pakistan and Iran, security and commerce are the top priorities.

Who opposed the recognition?

In this context, Russia and China have accused the U.S. and its allies for the economic crisis in the country. Both have also demanded the release of frozen funds and the provision of assistance to the Afghans.

The UN Security Council imposed sanctions on the Taliban stating terrorism reasons dating back to 9/11. But the council agreed on a resolution put forward by the United States to provide humanitarian aid to Afghanistan and support its economy.

Almost all western countries have refrained from recognizing the Taliban. Both Italy and France have strongly refused to have any sort of relationship with them.

According to chief Taliban spokesman Zabihullah Mujahid, the “United States is the biggest hurdle to delay in gaining recognition of western countries.” “The U.S. does not permit other nations to move in this direction and has not even made a move by itself,” he said while responding to reporters last month.

The U.S. hunt for justice

On July 31, the U.S. killed the prominent Al-Qaeda leader Ayman al-Zawahiri in a drone strike, which was a clear violation of the Doha agreement. The assassination of Zawahiri, one of the masterminds of 9/11 attacks, is a key achievement for the U.S., which has been constantly hunting for “justice” from Afghanistan.

When Biden announced the assassination news, he said, “Now, justice has been delivered. And this terrorist leader is no more.”

But the act of killing Zawahiri has increased speculations whether the U.S. “war on terror” has really ended. It also demonstrates that the U.S. might have intelligence backup in Afghanistan.

The Taliban has condemned the assassination, but the incident has clearly put them in a tough position. The assassination might have a significant effect on the Taliban’s relations with the U.S., Al-Qaeda, and the pending international recognition.

The Taliban are still on the terror list of many countries. Most countries abstain from recognizing them as they want the group to be more responsible and promote inclusivity. The international community urged the Taliban to provide more freedom for women and provide universal access to education.

A recent report by the UN Assistant Mission in Afghanistan (UNAMA) has also highlighted the extra judicial killings, torture, arbitrary arrests and detentions, and violations of fundamental freedoms by the Taliban regime.

Last August, Mujahid told reporters, “There will be no prejudice against women.” However, most girls in Afghanistan have not been allowed to go to school after August 2021. In December 2021, the Taliban banned women from traveling alone unless they have a male companion, and all women have been ordered to cover their faces in public.

Almost a year after the U.S. withdrawal from Afghanistan, many governments still tie their recognition of the Taliban to its actions on the ground, including the way the group view and treat women.