The narrative of a Taliban 2.0 dominated western circles, but for most Afghans, skepticism was always there. 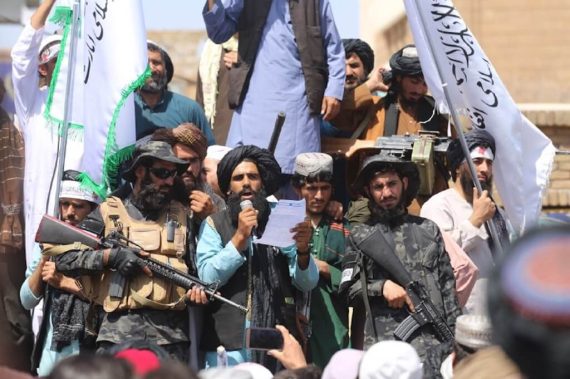 Taliban members gather and make speeches in front of Herat governorate after the completion of the U.S. withdrawal from Afghanistan, in Herat, Afghanistan on August 31, 2021. Photo by Mir Ahmad Firooz Mashoof, Anadolu Images

March has proved to be a busy month for the Taliban as they crackdown on basic freedoms and announce dramatic changes for the Afghan people, particularly the women.

First, the Taliban banned education for girls beyond 6th grade, making a sudden U-turn decision that ignited concern and raised many questions around the world. Second, women can no longer travel without a male chaperone, whether it be by car or plane. Third, recreational parks have become segregated by gender allowing men to visit on four days and women on the other three days. Finally, international media outlets like the BBC and Voice of America have been banned, taking their news bulletins off the air.

These hasty decisions have made experts, officials, and those familiar with the group concerned about what it could mean for the future direction of the country, and rightfully so. But besides the obvious concerns, the Taliban’s crackdown on basic freedoms is a sign of their weakness and inability to address the myriad of problems Afghanistan faces. Simply put, the Taliban are shooting themselves in the foot, showing their severe short-sightedness and major handicaps.

Read: Why Iran Is Concerned with Taliban 2.0

The Taliban are pushing to return to the past

Months before the talk of the Taliban joining some sort of power-sharing deal in Kabul, many in Washington were suggesting that the Taliban have softened their extremist religious interpretations and brutal use of force.

The narrative of a Taliban 2.0. dominated western circles, officials and leaders expressed hope in the group’s change of course this time around. But for most Afghans, skepticism was always there. How can a group that has countlessly violated human rights ever be trusted again?

During its first stint in power in the 1990s, the Taliban deprived all girls and women of education, keeping them in the dark. Similarly, media and freedom of expression took a strong detour as journalists could not report the realities happening on the ground. Other tactics like moral policing, interrogations, and reprisals against government workers, activists, and important figures were a common part of life under Taliban rule.

Today, as the world’s attention shifts more on the war in Ukraine and less on Afghanistan’s status under the Taliban, those past tactics are creeping up again.

In the media for example, the landscape has radically changed with 40% of Afghan media closed and 80% of women journalists losing their jobs, according to a report by Reporters Without Borders.

On top of that, the Taliban have a reputation of assaulting women’s rights. According to human rights experts, education, freedom of movement, access to health care, and access to work have all been barred from women. The Taliban notably replaced the Ministry of Women’s Affairs for the “Ministry for the Promotion of Virtue and Prevention of Vice” completely erasing women’s needs, though this comes as no surprise since in their eyesو women are second-class citizens anyway.

In the last seven-months of their rule, the Taliban’s actions have stayed on par with their past rules and regulations with no remorse as the foremost achievements of the last 20 years eroded away overnight.

However, for Afghans still residing in the country, the moral policing, heavy regulations, and deep penetration in their public spheres are unsettling, intolerable, and a reminder that the Taliban have not changed and are only making matters worse.

Read: Afghanistan Brings the Saudi-Iranian Rivalry to a New Level

The Taliban are inconsistent

Amid the onslaught of their recapture, experts were mostly unsure what the Taliban had in mind.

In an interview with BBC, Saad Mohseni, head of Tolo News, Afghanistan’s leading TV news channel asked the question that was on everyone’s minds, “will the real Taliban please stand up?”

He added, “we are getting different opinions and views from different quarters. Now is the time to make it clear to them [the Taliban] that if you go back to the mid 1990s, it’s not going to be acceptable to the world at large.”

It’s true. Since their takeover, the Taliban’s messaging has been inconsistent with ambiguous responses to the pressing concerns of education, media, and women’s rights. It is no wonder why the international community is walking on eggshells, still very reluctant to officially recognize a group that has little cohesion and a bad reputation on top of that.

Many experts believe that these inconsistencies reflect the deep friction between the Taliban’s political leaders and their hardline commanders and foot soldiers, whereas the abrupt backtrack on girls going to school acts as the biggest indicator of this.

It’s important to note that the Taliban are not a homogenous unit. Their political wing and military wing differ in terms of their degree in religious conviction. The problem with this is that neither wing can survive without the other, and for top tier Taliban heads like Mullah Haibatullah Akhundzada, they cannot afford to lose the loyalty of their foot soldiers who are holding everything down for them and therefore must appease them to prevent any further PR damage.

The Taliban cannot address the elephant in the room

Perhaps, the biggest handicap the Taliban faces is their inability to address the elephant in the room: the economic and humanitarian catastrophe unfolding in Afghanistan.

In fact, many Taliban members have desperately called upon former Afghan government officials and other actors to return and assist them with technical expertise because they fail to have any skills themselves.

As the group focuses on the lengths of men’s beards, the dress code of women, and how to hoist their flag atop the hills of Kabul, meanwhile, Afghans are starving.

A UNDP study conducted in September stated that 97 percent of Afghans could plunge into poverty by mid 2022.

What will the world do moving forward?

The many handicaps of the Taliban, one after the other, are clear signs of an already failed group.

Their crackdown on basic human rights in the name of an extreme interpretation of Islam has set the country back by many years already.

The Afghan people who simply want food on the table and a peaceful life will only increase their resentment and resistance towards them if nothing changes.

The question to ask now is what will the world do about such a debilitated force? If the entities that advocate for human rights, women’s rights, democracy, and basic freedoms do not act now— If the world does not show empathy for the sake of the innocent Afghan people — then these handicaps will lead to the complete disability and impairment of Afghanistan as a whole.

The Taliban are a reality that both Afghans and the world must reckon with, but in the end, their major handicaps and short-sighted decision making will deteriorate the country.

After all, a group standing tall on crutches cannot stand tall for long.

Nilly Kohzad is an Afghan-American economist and journalist. Her writing has been featured in CNN, Radio Free Europe/Radio Liberty, The Diplomat, and others. She tweets @NillyKohzad