A viable solution to tribalism in Africa lies in good governance, regional cooperation, and enhancing the role of the African Union. 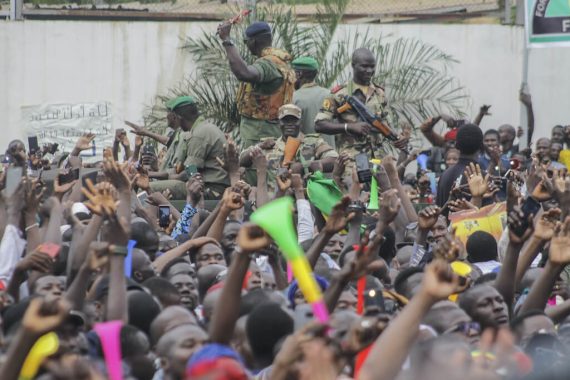 Thousands of Malians attend a mass rally at Independence Square in Bamako, Mali. Photo by Stringer via Anadolu Images.

Tribal conflicts have long been a major topic among scholars of violence and conflict. In Africa, the high number of tribes poses both opportunities and challenges to some African governments, which follow a policy of branding new national identities. While efforts for nation-building and identity formation move forward in certain African countries, in others, where loyalty and belonging to tribes grow steadily, such efforts meet obstacles .

In 1986, David Crary opined that Africans adhere to their tribes for factors such as the sense of belonging to a clan or extended family, shared customs and language, and displeasure with groups perceived as economic or political rivals.

Historically, tribes served as petty nationalities throughout Africa. Although these tribes fought each other before colonization, they were rarely involved in the daily clashes and wars that we witness today. It would be a mistake to disregard the historical origins of today’s tribal violence in Africa, which can be traced back to when Europeans created the borders of what they considered their own domains and grouped together tribes regardless of the languages, cultures, and peoples who owned and lived on these lands.

Read: Imams in Politics: Secularism vs. Religion in Mali and Senegal

Academics such as late Kenyan professor Katama Mkangi, and Richard Morrock believe that colonial powers created several practices that identified and institutionalized communal differences among colonized communities in Africa and promoted tribal jealousies as part of a divide-and-rule strategy. They set one ethnic group against another, such as the Kikuyus and Luo of Kenya, whom they viewed as dangers because of their vast populations.

After independence, however, Africans with financial and political interests in maintaining the status quo and profiting from the divides and frictions have perpetuated these tribal splits and communal divisions. Some ethnic communities regard investigating one of their own as a political witch hunt and an attack on their tribes and interests, even when the investigation is carried out by a legal and national authority for the sole purpose of national interest. The Jacob Zuma corruption case in South Africa, and his appeals and support from the KwaZulu-Natal province, bolster this point.

In East Africa, tribal warfare in Rwanda and Burundi has been widely explored, with a special emphasis on the Rwandan Genocide of 1994. There is also a clear ethnic division in Kenyan politics since the country’s independence in 1963. The 2007 post-election violence in Kenya serves as an illustration of how tribalism and politics intertwine, and how they impact each other.

The continuous political and security instability in Somalia may be regarded as a convergence of clan-based rule, national politics, and militancy. Clans’ alliances and allegiances are decided by where they find political and economic favor. The 2020 United Nations University report revealed that clans and leaders that feel alienated in resource agreements and power-sharing discussions tactically affiliate with the militant group Al-Shabaab, then realign with the government after their demands are granted.

Somali politicians, federal and local officials, and foreign missions have relied heavily on armed organizations to achieve their goals. Somalia’s fragility also means that state-aligned militants at times compensate for the shortcomings of the country’s official security services, offering intelligence and interacting with the local population on crime and intraclan violence.

In the West African countries of Mali, Niger, Nigeria, and Guinea, tribal conflicts and competitions have had significant impacts on recent political developments. The recent Fulani herders and local farmers’ crises have taken different dimensions in national politics. In Mali, for example, the communal crisis recently intensified after the spread of militant groups from the north of the country to central and western areas.

Read: Ruling Families in African Politics: From Kenya, to Chad and Ghana

Violent conflicts between Fulani and Dogon erupted as the Malian army failed to fight what was considered a “jihadist” insurrection dominated by the Fulani ethnic group and backed by armed “Islamist” organizations. According to research from 2021, the Malian army implemented a plan of funding and training a Dogon militia for self-defense, which assaulted Fulani communities, resulting in Fulani counterattacks. As a result, the 2019-2020 killings and internal conflicts between the Fulani and Dogon populations have occurred.

Ethnicity has also had a significant influence on Guinean politics in the previous decade. Former President Alpha Condé, a Malinke, vowed in 2010 to unite all Guineans, regardless of tribe, after winning the presidential election held under Guinea’s transition to democratic rule following a coup d’état two years earlier.

Condé’s governance and political strategies, however, demonstrated that he used the ethnic card until he was deposed in a coup in September 2021. During his presidency, there were also riots between youths and supporters of his then-ruling party, and the main opposition parties from Guinea’s two largest ethnic groups, the Malinke and the Peul (or Fulani).

In Nigeria, it is difficult to examine political changes outside of an ethnoreligious setting. The ongoing campaigning for the next 2023 general election has focused on the Hausa-Fulani versus the Yoruba-Igbo, or south versus north. Taking up arms and intercommunal tensions have been politicized, as is largely the case with the Niger-Delta crisis in the country’s south-south zone, conflicts between Fulani herders and local farmers in the Middle Belt and other parts of Nigeria, Muslim-Christian clashes in Kaduna, and the Boko Haram insurgency in the northeast. Meanwhile, the ruling elites and main political parties from the country’s largest ethnic groups have all perfected the art of feeding off and exploiting grievances of marginalized communities.

Looking at different incidents of tribal violence in Africa and their impact on regional politics, communities, and the economy, one could conclude that, while the causes of conflicts are broad and varied, ethnicity is a tool exploited in various regions of the continent. The introduction of one-party political systems aimed at blunting the influence of ethnic factions is one of the solutions adopted by several post-independence African leaders who denounce tribalism as an obstacle to political and economic developments and consider communal crisis to be a major impediment to national development.

However, some of these leaders’ actions contradict their statements, since their styles of leadership, tampering with the constitutions, and hegemonic presidencies—as witnessed in numerous nations today—have all led to various types of social and political violence between the political dominant tribes and marginalized ethnic groups.

It is worth mentioning that some Africans recommend redrawing boundaries and reverting to pre-colonial domains to prevent the communal crises, and sociopolitical and economic damage caused by colonial borders. However, several Pan-Africanist theorists and figures, including Ghana’s Kwame Nkrumah, have criticized this solution, arguing that redrawing borders along ethnic lines, or as they were before colonialism, would result in a continent composed of hundreds of small tribal states, which would only exacerbate crisis and instability.

Hence the viable and practical solutions to tribalism in Africa lie in good governance, regional cooperation, and enhancing the role of the African Union and borderless Africa initiatives.