It is not possible to say positive things about the fate of the Syrian Revolution if there isn’t a major change in the field soon. If the rebels don’t unite under a unified leadership they will go on to lose step by step. 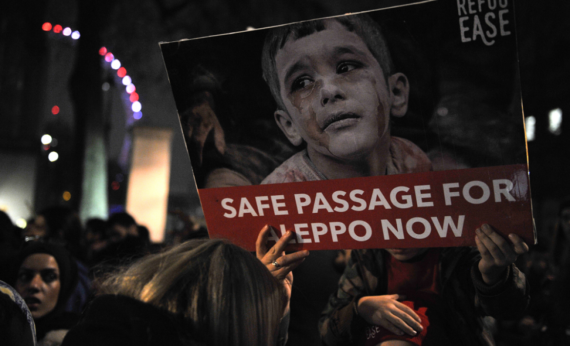 In the biggest battle of the ongoing Syrian war for Aleppo since July 2012, the Assad regime and its Russian and Iranian allies benefited from the international community’s discord to corner the rebels into a small area of the city. By knowing the military and political importance of Aleppo, the regime and its allies targeted civilians to force the city’s surrender. Only in the last week, nearly a thousand civilians lost their lives, and thousands more were wounded.

The type of operations by the regime resemble the Russian strategy of “scorched earth” already used in Chechnya. Among the prominent tactics being used are the use of barrel bombs, which goes back to the notorious General Suheil Hassan from the pro-regime “Tiger Forces”. Hassan argued that a normal life in Aleppo must become impossible. Only that circumstance could lead to loyalists regaining a foothold in eastern Aleppo. Specifically infrastructure like markets, schools, electric stations, and hospitals were targeted by the regime. This shows the long-term strategy for Aleppo.

It is a broadly used strategy by the regime to force civilians out of cities that the regime could not take back by conventional force. Therefore it decided to seize by bombs emptied cities. This has been witnessed also in Homs, Ghouta and now in Aleppo. With the Russian intervention, the “scorched earth” strategy became more violent. Besides barrel bombs, phosphorous, napalm, and cluster munitions have also been dropped. As a result barely any humanitarian infrastructure has been left standing. There are no longer any hospitals in the besieged rebel-held districts of Aleppo. One of the fatal results of this strategy is the huge amount of civilian causalities. Since the beginning of the battle in Aleppo, civilians lost their lives or had to migrate out of the city.

The two steps of besieging Aleppo

The capture of rebel-held Aleppo would not have been possible without Russian air support, and simultaneous offensives by the PKK-affiliated YPG and DAESH that forced rebels to fight on multiple fronts.

In February 2016, the regime and its allies started an offensive from Bashkoy and were able to reach Nubbol and Zahra. The three year old partial siege of Nubbol and Zahra could only be broken with massive Russian close air support for Syrian Arab Army (SAA) troops on the ground. Nubbol and Zahra was besieged from three sides by rebel forces and the other side bordered the YPG-held territory of Efrin. With this move the partial siege was broken and the main supply road of the rebels from Azaz to Aleppo was cut. After this the Kurdish YPG invaded Tal Rifaat, fighting the FSA-rebels there with massive Russian air-support too. The YPG created a buffer zone between rebels in the north and regime forces and its allies. During the YPG assault on Tal Rifaat, DAESH also attacked Marea, which seriously put pressure on the rebel forces. It should be noted that the capture of the infantry school in Aleppo by DAESH from rebel forces helped the regime advance towards Bashkoy.

After this, the regime started its second step of the offensive in June 2016. It imposed its own siege on rebel-held territories in Aleppo. The Russian and regime air forces systematically bombed the last supply-road – the Castello Road – to the eastern parts of Aleppo, which runs through northwest Aleppo. The Castello Road became unpassable after regime forces and their allies advanced from Handarat towards the Mallah farms and constantly bombed the road from the north, while YPG forces attacked the last supply-road from the south. This situation led to the de-facto siege of Aleppo. The rebels started an offensive against the YPG forces in Sheykh Maqsoud but they failed. The regime and its allies, who captured the Mallah farms, started a joint operation with the YPG and seized the Castello Road. The siege of Aleppo started in July 2016.

The counteroffensives of the rebels

To break the siege the two major rebel umbrella organizations, Aleppo Jaysh al-Fath and the Fatah Aleppo Operation Room, started a joint operation from the south of Aleppo. After a week the rebels took the 1070 settlement complex, the Artillery School, Ramousah and Musherfah, which again led to the break of the siege. The operation from inside and outside the siege was both successful. But in the following days the rebels weren’t able to widen the area by capturing the 3000 complex and the cement factory from the SAA. The rebels weren’t able to open the new supply route through Ramousah to be wide enough. The regime artillery and the Russian and regime airstrikes imposed a de-facto siege on Aleppo once again. On the ground the regime started a counteroffensive with a huge amount of foreign Shiite fighters. In this offensive the Iranian strategy of “human waves”, which proved itself in the Iraq-Iran war, were used by the foreign Shiite forces fighting for the regime. It also demonstrated how heavily the regime relies on foreign fighters. Rebels lost Ramousah, Musherfah, the Artillery School and half of the 1070 complex. Aleppo was besieged again.

At the end of October, Jaysh al-Fath and the Fatah Aleppo Operations Room tried another joint operation to break the siege. By taking into account the weaker effectiveness of airstrikes in urban areas, the rebels didn’t attack from the area around the Artillery School. They attacked the Dhahiyat al-Assad region further to the southwest of Aleppo’s center. Dhahiyat al-Assad and Minyan was captured in the operation by rebels. They made some gains in the 1070 complex, but the SAA and its allies repelled attacks on the 3.000 complex and the New Aleppo district. An offensive launched on the Zahra district produced some gains, but again all of them were reversed the same day. During this operation it was seen that Jaysh al-Fath began relying heavily on VBIEDs, also known as car bombs.

A total of 17 VBIEDs were used. Six of them were used at the 3000 complex, three VBIEDs in New Aleppo and the same amount in the 1070 complex, two in Dhahiyat al-Assad, two in Minyan and one at the Zahra district. Three of the VBIEDs were remote controlled VBIEDs. They belonged to Ahrar al-Sham. Eight VBIEDs were from Turkistan Islamic Party and six VBIEDs from Jabhat Fath Sham. Rebels tried to compensate for their lack of air superiority by using VBIEDs. This tactic was not significant enough to change the fate of rebels in eastern Aleppo.

After the failed rebel attempt, the regime began its own large scale attack from the air and ground. The eastern parts of Aleppo were attacked with intensive firepower, which led to a step by step withdrawal of rebels. Besides the regime forces, Russian Special Forces, Iranian Revolutionary Guards, Shia militias and the Lebanese Hezbollah participated in the offensive. The PKK-affiliated YPG forces joined the al-Assad side from Sheykh Maqsoud. The Kurdish organization attacked the rebels and cooperated with the regime. Rebels and civilians started to withdraw to the southern parts of besieged eastern Aleppo and were squeezed into an area less than 30 km². As a result they gradually lost other parts of the last remaining rebel-held areas as well.

There are reports that the regime and its allies have begun arrests of opposition figures, while some rebels have started to negotiate with Russia for an evacuation route from Aleppo under Turkish mediation.

Behind the bombardment by the regime and its allies, which has not distinguished between fighters and civilians, is the idea that a full capture of Aleppo could break the willpower of rebels to win this war.

After the fall of Aleppo the regime will try to eliminate the rebels in south Syria and Idlib militarily or they will try to force them to surrender. Or at least they will try to impose a political solution on the negotiation table against rebels who have lost the war.

It no longer seems possible to change the military fate of Aleppo. After this it seems more logical to try to find a solution on the negotiation table and try to avoid more civilian causalities, which is the current strategy of Turkey.

It is not possible to say positive things about the fate of the Syrian Revolution if there isn’t a major change in the field soon. If the rebels don’t unite under a unified leadership they will go on to lose step by step.