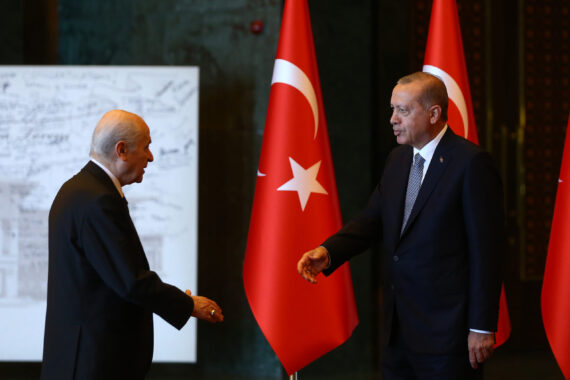 By February 2018 pre-electoral alliances became one of the game changers in Turkish politics. Even though all legal amendments and regulations regarding pre-electoral alliances were designed for the projected elections in 2019, the decision to hold early elections on June 24 completely changed this direction. Thus, the June 24 parliamentary elections brought new opportunities for collaboration to political parties on a legal basis.

Nowadays, Turkey has been discussing the possibility of pre-electoral alliances in local elections. Last week, chairman of the MHP – Devlet Bahceli – announced that they are open to discuss the issue of pre-electoral alliances in local elections – even though this will not be easy to formulate. While Bahceli indicated his reservations based upon a concern for the rules and nature of local elections, he brought this issue to the forefront again. President Erdogan responded positively to Bahceli’s call and stated that this could be a topic to discuss in the following days.

The second variable that affects the formation of alliances is related to the lack of legal infrastructure. The amendment adopted in February only regulates pre-electoral alliances in parliamentary elections. Both presidential and local elections were excluded. Thus, there is need for a new amendment that regulates official alliances on a local level. When it comes to examples from the world, we see that there are regulations on pre-electoral alliances in local elections in federal states such as Mexico and Brazil. Turkey should pay attention to frame possibilities and limitations to formulate a legal basis under a unitary structure.

For all these reasons, parties should take these factors into consideration before framing the rules of alliances in local elections. Until now, all discussions have concentrated on the positive and negative effects of alliances on the election results in metropolitan cities. Nonetheless, if there is need for a detailed framework, these questions should also be asked: how will alliances be formed in the AK Party-dominated and the MHP-dominated electoral districts? What will be ways of forming alliances in districts where voting rates between the two parties are close? Do these parties prefer to have a common candidate not running under a party banner? How will the CHP, HDP, Good Party, and the Felicity Party formulate their election strategy if forming official alliances becomes possible? What will be the strategy of these parties, especially in metropolitan cities? These questions are fundamental in designing pre-electoral alliances in local elections.

All these variables reflect that there is a need for maximizing gains and minimizing costs when determining the rules of pre-electoral alliances. All these parties should seriously calculate how alliances will reflect their voting rates. Finally, political parties should pay attention to design electoral stimulations for each district and make categorizations in order to see their total gains and losses.