Saudi Arabia and Pakistan are testing each other’s nerves to better position themselves in a new geopolitical scenario created by the structural realities of the changing regional landscape. 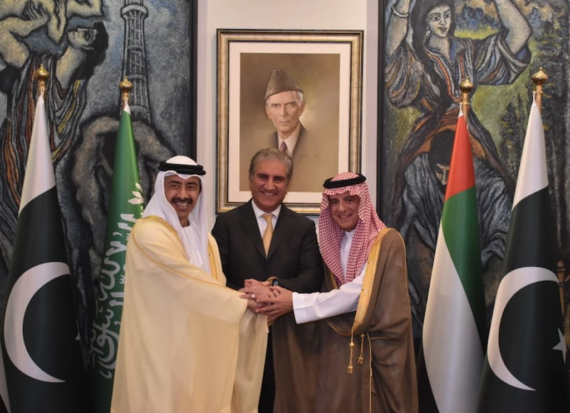 Pakistan’s relations with Saudi Arabia and the United Arab Emirates (UAE) have become complicated in recent years as a result of changing regional geopolitics. To manage the difficulties in relations with Saudi Arabia, in January of this year, Pakistan appointed a retired military commander as its ambassador to Riyadh. Lieutenant General Bilal Akbar replaces Ambassador Raja Ali Ejaz, a career diplomat who was appointed to Riyadh in January 2019.

The appointment of an experienced military man is a calculated move to better handle the challenges facing the bilateral ties and their likely effect on economic relations between Pakistan, on one hand, and Saudi Arabia and the UAE, on the other. It is worth noting that the Saudi ambassador to Islamabad, Nawaf bin Said Al-Malki, is also a former military man who has been in his current post since September 2017.

General Manoj Mukund Naravane, the chief of the Indian army, visited the UAE and Saudi Arabia recently for the first time. The visit was seen as a clear sign of India’s growing military ties with the two Gulf states.

Though India has close economic relations with the Gulf Cooperation Council (GCC) as it imports a significant portion of its oil and gas needs from the region and exports some $60 billion worth of goods to the six GCC states, New Delhi is keen to advance its military interests in the Arab region.

India’s ambition is supported by the large presence of Indian expatriates in the GCC, with their numbers in the UAE and Saudi Arabia reaching six million in total. Indian interest in expanding military ties with Saudi Arabia and the UAE presents a tricky situation for Pakistan, which has been a major security partner to both Riyadh and Abu Dhabi for a long time.

A number of factors are contributing to the changing security environment in the Gulf region as key countries keep a close watch on Abu Dhabi Crown Prince Mohammed bin Zayed (MBZ) and his Saudi counterpart Mohammed bin Salman’s (MBS) uncontrolled ambitions. Countries like Pakistan, India, Iran, and Turkey as well as France, Britain, and the U.S. realize that power equations in the Middle East are changing. Israel’s embrace by Arab princes adds a new dimension to regional politics.

Military ties between Pakistan and the GCC

Pakistan can take credit for having developed a military ecosystem in the Gulf, especially in Saudi Arabia and the UAE, as the GCC has a history of deep-rooted military ties with Pakistan. India already enjoys a vast trade and business engagement with Arab monarchies. Since 1967, Pakistan has routinely provided military and air force training to the Saudi Kingdom. The comprehensive defense pact between the two countries in 1982 institutionalized Pakistan’s role in Saudi Arabia’s security.

Similar engagements exist with the UAE. The fact that the first five chiefs of the UAE Air Force were Pakistan Air Force (PAF) officers speaks volumes about this military relationship. PAF officers continue to serve in the UAE as of today. The Pakistani army has also established an armor training school in the UAE  and has provided training to UAE commando battalions, as well as to all armed and artillery corps officers.

Pakistan’s economic dependency on the Gulf

Saudi Arabia and the UAE are the two biggest sources of remittances to Pakistan’s economy. Around 2.7 million Pakistanis live in Saudi Arabia and 1.5 million live in the UAE. Pakistan received $14.2 billion in remittances during the first half of the financial year 2020-21 compared to $11.37 billion in the same period of the previous year. The GCC contributed 60.14% of the total cash inflow to Pakistan during the July-December 2020 period.

The rulers of Saudi Arabia and the UAE are experts in displaying their petulant money power towards Asian and Arab countries by using threats of not issuing work visas, trade boycotts, and withdrawing investments. Such a state of affairs requires high levels of diplomatic and political skills. Therefore, Pakistan’s new ambassador to Riyadh has a delicate task in managing relations on multiple fronts.

Saudi Arabia asked Pakistan to return the second tranche of $1 billion of a total of $3 billion that it had borrowed from Riyadh in 2018 shortly after Imran Khan became prime minister of Pakistan. The UAE only deposited $2 billion out of the $3 billion it had committed to Pakistan, halting a $1 billion tranche when Pakistan’s foreign minister refused to participate in the Organisation of Islamic Cooperation (OIC) foreign ministers’ meeting in the UAE after Abu Dhabi extended an invitation to India to be the guest of honor in the plenary session on March 1, 2019.

Bin Salman put pressure on Pakistan to stay away from the Kuala Lumpur Summit in December 2019 which was attended by Malaysia, Turkey, Qatar, Iran, and Indonesia.

In November of last year, the UAE temporarily suspended the issuance of new visit visas for 12 countries, including Pakistani passport holders.

The criticism of the Saudi-based OIC by Pakistan Foreign Minister Shah Mahmood Qureshi in August 2020 for not organizing a meeting of foreign ministers on the Kashmir issue did not go down well with Saudi Arabia. Qureshi’s statement that Pakistan would explore the possibility of convening a meeting of foreign ministers of Muslim countries outside the OIC angered the Saudis. Bin Salman put pressure on Pakistan to stay away from the Kuala Lumpur Summit in December 2019 which was attended by Malaysia, Turkey, Qatar, Iran, and Indonesia.

Western power brokers have exploited Saudi control and influence over the OIC, making the 57-member organization ineffective on major global issues. Saudi interventions on behalf of Western interests have been a source of frustration and anger among Muslims but not many countries have come forward to challenge Saudi Arabia’s fragile leadership in this matter. Though the Kuala Lumpur Summit was not directed at the Saudi leadership, the Saudi government was panic-stricken when it saw important Muslim leaders gathering for a summit without its approval.

Pakistan feels that Saudi Arabia and the UAE have betrayed Islamabad on the Kashmir issue by not being vocal enough to support its position against India. Both Saudi Arabia and the UAE have long supported Pakistan’s stand on Kashmir. Now, their growing ties with India have become strategically and economically important, and the Saudi and UAE leaderships have distanced themselves from Pakistan’s interests.

It is true that Pakistan has limited economic options. It is equally true, however, that Saudi Arabia is left with limited military options in the case a major crisis hits Riyadh. Many in Pakistan believe that the Saudis and Emiratis do not provide them the kind of economic support they have been providing to Egypt, especially after bankrolling the coup against the democratically elected government of Mohamed Morsi.

The friction in relations with Saudi Arabia is also because of Pakistan’s own change of foreign policy orientation. Prime Minister Imran Khan is keen on charting a more independent foreign policy after decades of reliance on the U.S. and the Gulf states. Islamabad’s reduced reliance on the U.S. is replicated in less reliance on the Saudi-UAE axis. It started in 2015 when Pakistan’s parliament unanimously refused to send troops to participate in the Saudi-UAE-led war in Yemen, shattering the Saudi impression of using Pakistan as a hired gun.

Later in 2017, in spite of pressure, Pakistan did not halter its relations with Qatar in the aftermath of the Saudi-led blockade of Qatar in June 2017. In fact, Pakistan and Qatar started a container shipping line between Port Qasim and Hamad Port to reduce the blockade’s impact.

Pakistan’s deepening military and cultural ties with Turkey and the revival of the dormant Islamabad, Tehran, and Istanbul rail corridor also make the Saudis unhappy. Imran Khan’s patronage of Turkey’s growing soft power in Pakistan, including the broadcast of the Turkish historical drama series “Ertugrul” on television in Pakistan, is not liked by the Saudis as they see it as undermining Saudi efforts to influence Pakistani society.

The support of the Pakistani government and public for the Turkey-backed military operation in Azerbaijan to liberate Azerbaijani lands from Armenia also exposes Saudi Arabia as not aligned with Muslim countries. Saudi Arabia has further provoked ordinary Pakistanis and the government by putting pressure on Islamabad to recognize Israel after the UAE, Bahrain, and Morocco established formal diplomatic ties with the Jewish state. The Saudis appear desperate to officially recognize Israel. They want Pakistan and other Muslim countries to make things easy for Riyadh by embracing Israel.

In the changing geopolitical games, both Pakistan, and Saudi Arabia and the UAE are likely to focus on their own strategic and economic interests. They are unlikely to view their relations through the lens of past imperatives. It is also true that Pakistan cannot afford to let its ties with the GCC deteriorate further, while the Saudis may find it very difficult to find an alternative to Pakistan due to their decades-long military alliances. So, there seems to be a diminishing space for a zero-sum approach in Pakistan’s ties with Saudi Arabia. Both Saudi Arabia and Pakistan need each other, and they are both testing each other’s nerves to better position themselves strategically in a new geopolitical scenario created by the structural realities of the changing regional landscape.

Also Read
The Most Dangerous Place in the World: Jammu & Kashmir and Its Ongoing Border Disputes