China's Economic Interests in the GCC: Economic Gains over Politics

China has no ambition of dislodging the United States from the Arab Peninsula. A cordial relationship with all Members of the GCC is in its best interest. 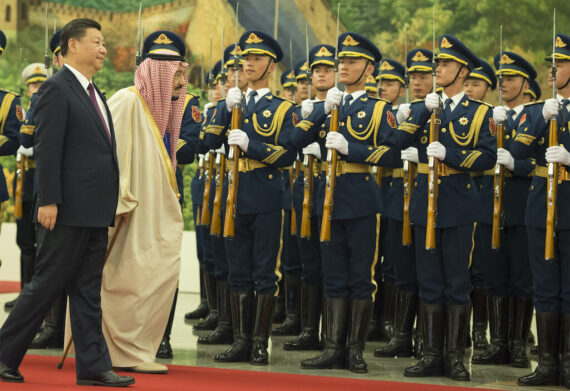 Sheikh Yamani, Saudi Arabia’s former oil minister (1962-86) once quipped that that the Age of Oil, like the Age of Stone, would come to an end long before the world ran out of oil. Reminiscent of history’s flow of game-changing trends implied in China’s ancient philosophy – the “I Ching” (易經) or “Book of Changes”, global paradigm shifts are afoot seemingly to help bring about Yamani’s “prophecy”.

Following Deng Xiaoping’s “Open Door Policy”, China has grown to be the “factory of the world”. The nation became a net importer of oil mostly from the Middle East. Fossil fuels have since driven China’s economy and turned it into the world’s largest oil and gas customer, representing 30% of China’s total energy demand and 25% of the world total.

Dependence on energy supplies from the Middle East, however, has national security concerns for China. Such supplies transit through the narrow “choke points” of Iran’s Strait of Hormuz, open to U.S. hostility, and the Malacca Strait near Singapore which hosts America’s 7th Fleet.

China has been pushing hard to reduce energy intensity of its GDP growth, in pursuit of a green revolution to build a low-carbon energy system towards 2035 and 2050, part of the “China Dream” of national rejuvenation. China now formally pledges peak carbon emission by 2030 and carbon neutrality by 2060, targets likely to be incorporated in the coming Five Year Plan (2021-25).

With Climate Change rallying the world to embrace a greener future, including green-energy vehicles, these imperatives are bound to drastically reduce global demand for oil.

China has launched an ambitious Belt and Road Initiative (BRI) to connect the world, including GCC countries and the rest of the Middle East.

Global reserve of methane hydrates is estimated at twice as much as all other known fossil fuels combined, enough for 1,000 years’ human consumption. China’s gas hydrates reserve is estimated at 100 billion-ton oil-equivalents, 80 percent of such reserve is in the South China Sea.  The nation is expected to kick start commercial production by 2030.

China has launched an ambitious Belt and Road Initiative (BRI) to connect the world, including GCC countries and the rest of the Middle East. This includes a “Digital Silk Road” for internet transactions and an “Arctic Silk Road” encompassing increasingly-navigable maritime routes through the Arctic.

The BRI is intended to entrench China’s strategic advantage as the central hub of the world’s supply and value chain, exporting excess capacity to meet a massive global deficit for transport infrastructure. It also provides a global platform, including Islamic finance, to accelerate the internalization of the renminbi (RMB), the Chinese currency. The subtext is to avoid over-dependence on the greenback, which is often weaponized to impose long-arm US sanctions.

China has launched a sovereign digital currency and a joint venture between the People’s Bank of China, the country’s central bank, and SWIFT (Society for Worldwide Interbank Financial Telecommunication), the world’s premier network for international transactions. This would turbo-charge RMB internationalization.

China is the largest importer of Saudi oil. However, China doesn’t share Saudi Arabia’s hostility towards Iran. Despite some earlier Chinese arms sales and recent supply of Chinese COVID-19 vaccines, China doesn’t seem to have broader synergy with Saudi Arabia other than economic and energy interests. Saudi-China relations are deemed largely “functional, not strategic”, according to the Brookings Institution.

However, Brookings’ classification misses a more granular and subtle approach. According to Degang Sun,Professor of Political Science at the Institute of International Studies, Fudan University, China is establishing a non-aligned network of Middle East partnerships, a kind of ‘marriage without licence’, seeking common ground while preserving differences.

There are four categories –

Meanwhile, the United States’ strategic interest in the Gulf has substantially changed as America has become energy self-sufficient or energy-surplus following extensive exploitation of homeland shale energies. Uncle Sam’s current interest shifts to boosting the security and economic interests of Israel, its immutable ally thanks to the bipartisan, politically and financially powerful Jewish constituency.

Hence, the recent rapprochement with Israel of the UAE and Bahrain under the so-called Abraham Accords brokered by Jared Kushner, ex-President Trump’s son-in-law.

China has no ambition of dislodging the United States from the Arab Peninsula. A cordial relationship with all Members of the GCC is in its best interest. The same applies to Iran, Israel, and Turkey. Nor does China want to be dragged in the proxy war in Syria involving Sunni-Shiite rivalry and self-interests of the United States, Russia, Israel, amongst others.

For China, one strategic interest in the Middle East and Central Asia is maintaining good relations with Islamic countries (including Turkey) with a Uyghur population. Some Uyghurs are suspected to be connected with the East Turkestan (Xinjiang) independence movement, which China brands a terrorist organization. International condemnation of Uyghur camps in Xinjiang is keeping Beijing on its toes.

GCC countries have grown incredibly rich out of the oil boom. But the beginning of the end of the Age of Oil is weighing on all oil producers. Hence, diversification to escape the so-called “resource curse”. Versions abound: Saudi Vision 2030, Qatar National Vision 2030, Bahrain Economic Vision 2030, Oman Vision 2040 etc.  However, owing to “GCC-unique” structural incapacities such as super-sized public sector, high labour cost, low productivity and lack of sufficient skills, outcomes are often not matching expectations.

Some African examples are instructive. One approach is to nurture a carefully selected niche industry linked to the special resource. A rare success poster-child is Botswana. Through a “forward skill-beneficiation” strategy, the small country managed to press De Beers to gradually transfer expertise to build an indigenous skill pool, which eventually achieved a niche world-class diamond-cutting industry. Other examples of linkage industries are extracting machinery and equipment, drilling rigs and platforms, construction materials, fertilizers and engineering skills. What applied to De Beers may also work with other investors, China included.

Thanks to different performance in response to the pandemic, China is now expected to surpass the United States by 2028, five years sooner than before. Willy-nilly, the China factor is set to loom large among GCC countries for the foreseeable future.

Andrew K P Leung, SBS, FRSA, International and Independent China Strategist based in Hong Kong with many decades of senior government experience interfacing with Mainland China. He was a US-government-sponsored International Visitor to the United States in 1990 to brief Chairmen and senior executives of Fortune 50 multinationals on China after Tiananmen Square. He speaks regularly on China on international conferences and English-channel international television. [email protected]
Andrew Leung International Consultants Limited