Turkey’s primary strategy in this game is to deter the Syrian regime from a brutal offensive while trying to find a middle ground with Russia and bringing the similar minded European powers closer to the game. 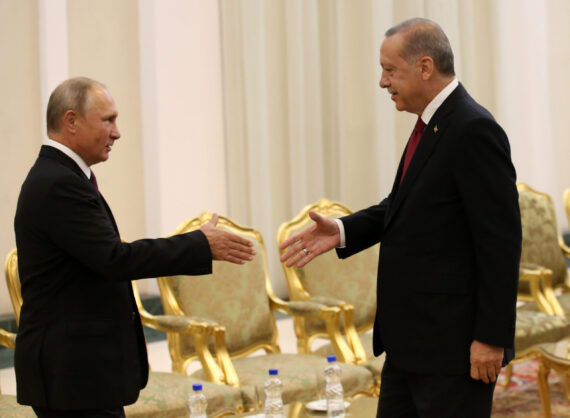 After last Friday’s tripartite summit of Iran, Russia, and Turkey in Tehran, there was another meeting this Friday, bringing Turkey, Russia, France, and Germany together in Istanbul. The meeting enabled France and Germany to be more involved in the resolution of the crisis. France and Germany’s positions on Idlib are very similar to that of Turkey for different reasons. Hence, we can talk about a European perspective on Idlib and it also includes Turkey’s. Going back to Friday’s meeting, all parties agreed on the necessity of a political solution for Idlib according to the statement of Turkey’s Presidential Spokesman Ibrahim Kalin. As these diplomatic exchanges continue, Turkey feels to have more time to facilitate a peaceful solution on Idlib.

Turkey is trying real hard to prevent a devastating battle from occurring in Idlib. The diplomatic talks that occurred in Tehran and this Friday in Istanbul are just one side of these efforts. The other side is pure realpolitik. Turkey increased its tone against a fait accompli regime offensive in Idlib and it further made its deterrence discourse more credible with new deployments on the ground. While the open sources did not give the specifics, what we know is that Turkey’s reinforcement included new troops and armored vehicles around its observation posts in Idlib and along its border with Idlib.

The reinforcement, on the one hand, serves the purpose of deterring a possible regime offensive, but on the other hand, it is also vital for Turkey if its deterrence strategy fails to deter the regime from starting the offensive. In such a scenario, these reinforcements will play a significant role for Turkey to defend its already-settled troops in Idlib. These troops had been deployed to serve in Turkey’s observation posts that were established in the Astana process of Turkey, Russia, and Iran. They were not designed for defensive purposes but merely for the reconnaissance mission. Now Turkey is making these posts defendable with new reinforcements and, hence, also deterring the regime and other hostile forces from attacking them.

What is crucial at this moment for Turkey is meeting on a middle ground with Russia. As long as Turkey and Russia can keep a common position based on mutual respect for their security perceptions, the situation in Idlib and elsewhere in Syria should be solved peacefully and satisfactorily for both countries.

Excluding the American sphere of control in Syria, Turkey’s primary concern is the PYD’s role in Tel Rıfaat and Russia’s primary concern is the armed groups in Idlib. Turkey has already designated the the Hey’at Tahrir al-Sham (HTS) as a terror organization and it seems like Turkey will increase its pressure on the HTS to dissolve itself or leave Idlib. As long as Russia plays a supportive role in Idlib, the city can be cleaned from groups like the HTS without burning down the entire city and causing another humanitarian catastrophe.

Turkey’s primary strategy in this game is to deter the Syrian regime from a brutal offensive while trying to find a middle ground with Russia and bringing the similar minded European powers closer to the game. This strategy seems to not be a maximalist one but quite a reasonable and applicable strategy that can convince both Russia and European powers. What Turkey and the rest of the reasonable actors need now is to prevent spoilers from undermining this well-crafted strategy.