Barzani Back in Turkey: Towards Re-building Relations?

The KRG is also not happy with the presence of the PKK in its region. As PM Barzani stated 5 days before his official visit to Turkey, "The PKK uses KRG land it occupies as a base to attack Turkey." 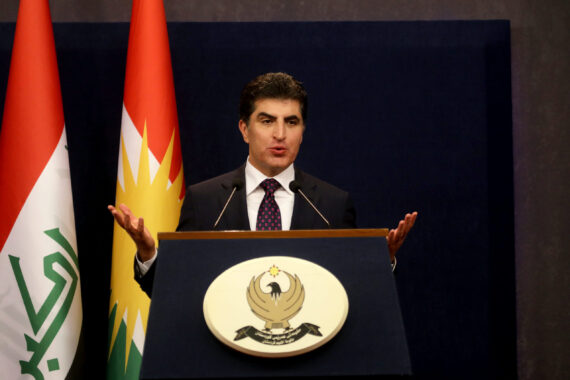 KRG PM Nechirvan Barzani during his speech where he stated that the PKK is occupying KRG territories in order to attack Turkey. Anadolu Agency

After the electoral victory of the AK Party on June 24, President Erdogan took his oath last Monday in parliament as the first executive president of Turkey. A large number of world leaders (22 presidents, 17 prime ministers) attended the ceremony in Ankara. Kurdistan Regional Government’s PM Nechirvan Barzani was among the guests, as he also attended the ceremony on official invitation from Turkey. This was Barzani’s first official visit to Turkey after the controversial independence referendum in September 2017.

Turkey took a firm approach against the September referendum as it stands against de facto secession attempts in the region. The referendum has become a turning point as the governments of Turkey, Iran and Iraq –all in favor of Iraq’s territorial integrity- cooperated to halt the one-sided independence move of the Kurdistan Regional Government (KRG). The cooperation gave quick results with the KRG’s back off, which did not only halt an ill-started independence move but also prevented further instability in Iraq that might likely have led to a civil war. The KRG, particularly the KDP, was surprised with Turkey’s firm anti-referendum stance. I, on the other hand, am still surprised by the KRG’s naivety not to expect such a reaction. Turkey, a country that has long struggled against ethnic secessionism, naturally positioned itself against a de facto secession attempt in its neighboring country.

After this background, one might jump to a conclusion that Turkey and the KRG were split and would be likely to stay so. Barzani’s visit to Turkey has shown the shortsightedness of such quick conclusions. After all, Turkey and the KRG share a border, host families dispersed across the borders, and further share common economic and security interests in a geography where actors are never in short supply of adversaries.

The economy of the Iraq Kurdistan Region (IKR) heavily depends on the flow of goods to and from Turkey and further needs the continuation of investments from Turkey. This is no charity job for Turkey, as the country also benefits from trade with the KRG. The governments of Turkey and IKR also share a more basic interest – security. Both Turkey and the KRG feel threatened by the PKK. The PKK uses the Turkey-Iraq border for its terror attacks against Turkey. The organization’s headquarters and many training camps are located in places under the jurisdiction of the KRG. For this very simple reason, Turkey wants to wipe out the PKK from KRG territories.

The KRG is also not happy with the presence of the PKK in its region. As PM Barzani stated 5 days before his official visit to Turkey, “The PKK uses KRG land it occupies as a base to attack Turkey.” The PKK controls a significant chunk of the KRG territories from Qandil Mountains to the Turkish border, which it calls Medya Defense Zones. The KRG, let alone building up an independent state, cannot even rule its regional territories. Further, the PKK is an imminent threat to the KDP as the two fell onto different sides in a former conflict during the mid-1990s. Further, the KRG has no neighbor that it can fully trust in a world where Turkey and the KRG are hostile to each other. For these reasons, the decision makers in Turkey and KRG are likely to cooperate in the future.

Nevertheless, the future of relations has to change as Turkey is no longer satisfied with the status quo in Iraq where the PKK can recruit, train, and operate in widespread safe havens. Turkey seems to be committed to wipe out the PKK from Iraqi territories but its alliance with the KDP could not provide such a result so far. Turkey sees such a termination for the PKK in Iraq possible only with the cooperation of the Iranian and Iraqi governments. Hence, Turkey prioritizes terminating PKK presence in Iraq with the help of the KDP but also increasingly more and more with the help of Iran and Iraq. Turkey’s rapprochement with Iran and Iraq seemed to alienate the KRG for a while, but Barzani’s visit implies that the KRG is also now aware that it’s not in its interest to abandon Turkey as a partner.