The politicization of the Beirut blast probe has polarized public opinion, exacerbated the public debate and led to sectarian clashes. 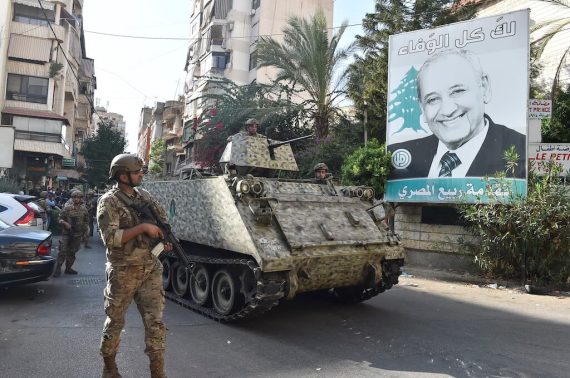 Security forces are dispatched as hundreds of supporters of the Shia group Amal Movement and Hezbollah gather during a protest held to demand the dismissal of judicial investigator Tarek Bitar on October 14, 2021. Photo by Houssam Shabaro, Anadolu Images

The Beirut clashes on Thursday, October 14, 2021, signaled a new chapter in the Beirut blast probe.

This time, tensions over the Beirut blast probe have reached a new level, and there are fears of violent escalations.

On October 14, Muslim Shiite parties, Hezbollah and Amal, organized a protest in front of Beirut’s Justice Palace to ask for the suspension of Bitar.

Meanwhile, chaos and confusion erupted in the Tayouneh area and the Ain al-Remmaneh suburb, in the southern suburb of the capital Beirut.

Tayouneh area is not new to sectarian clashes. It was a former 1975-90 civil war front line between Shia and Christian areas. Furthermore, the Ain al-Remmaneh suburb has been the theater of several clashes since the economic crisis started in 2019.

It is still unclear how the skirmish started, but unidentified snipers likely began firing at the protesters. Bursts of gunfire and explosions could be heard from the nearby Justice Palace, scattering the angry demonstrators. Black-clad protestors suddenly moved toward the Tayouneh area, where the Amal-Hezbollah armed groups were involved in gunfire clashes. The exchanges of fire involved snipers, guns, rifles, and rocket-propelled grenades (RPGs).

While Hezbollah and Amal accused the Christian right-wing party Lebanese Forces (LF) of being behind the sniper attack, the LF denied any involvement and condemned the violence. Its leader, Samir Geagea, also blamed the Hezbollah incitement against judge Bitar.

Lebanese Army soldiers were deployed in the surrounding area to stop demonstrators and contain the violence. Military vehicles blocked the road and joined the epicentre of the clashes, where the shootings were ongoing.

Demonstrators approached soldiers asking them to let them pass. Meanwhile, hooded armed men, most likely Hezbollah-Amal demonstrators, appeared on the road and started to shoot in the air near the Lebanese Army, which took no action.

I also witnessed a crowd surround and attack an unidentified vehicle, and heard several other shots. It was not clear what happened as crowds obstructed the view of the vehicle. I didn’t see any wounded persons during these chaotic events. Gunfire exchanges and explosions could be heard in the immediate proximity of army deployment.

The Beirut clashes have caused panic and fear among Lebanese. Gunfire and explosions echoed, the wailing sirens of ambulances and evacuations revived memories of the 1975-1990 civil war.

Not all of the casualties were participants in the protests. Among the seven dead, a woman was shot in the head by a stray bullet in her house, and a delivery worker on duty was shot in the crossfire.

Following the Beirut clashes, the Presidency of Lebanon declared a day of mourning. Banks, schools, and public offices were closed. The Lebanese Army increased its deployment near the area of the clashes.

The Lebanese Army arrested nine people following the violence, according to a press statement. Currently, it is also probing a soldier suspected of firing towards protesters during clashes.

The burden of pressure over the Beirut clashes unexpectedly brought the Beirut Port Explosion Victims Association’s spokesperson Ibrahim Hoteit to call for the removal of Bitar. In a video circulating last Friday, he accused the judge of politicization and the U.S. of involvement in the investigation.

However, the video led to speculation on social media. Many users worried that Hoteit, whose brother died in the port explosion, had been threatened. Hours later, Hoteit stepped down as spokesperson, and in another video stated that he had spoken only for himself and denied he had been threatened when recording the first video. Meanwhile, the victims’ families association issued a statement reaffirming its support and trust in the current investigation.

Bitar has become the most exposed man in Lebanon. In recent weeks, he became the subject of several political attacks. Hezbollah’s chief Hassan Nasrallah called for the replacement of the leading investigator several times, saying he was biased and politicized.

Whenever Bitar tried to question former and current state officials, including former prime minister Hassan Diab, who was in charge at the time of the blast, and top security officials on suspicion of negligence, he was blocked from doing his job.

Amal and Hezbollah have repeatedly claimed that Bitar is biased and politicized as he tried to question top-level officials and sitting MPs belonging to their parties.

Although several former ministers and MPs subpoenaed by Bitar tried to remove him in recent weeks, the court rejected their complaints on October 4 and October 14, when the burst of clashes escalated in the Tayouneh area.

Nevertheless, the Beirut blast probe has reached a new level of tension. For the first time in decades, the streets of Beirut have turned into a warfare zone.

The politicization of the probe has polarized public opinion and exacerbated the public debate. Whoever supports Bitar’s efforts for accountability and justice over the disastrous explosion now has to face those who want his suspension from the investigation.

Furthermore, the Beirut blast probe has led to sectarian clashes, which brought the investigation to a level of tension never touched before.

For the first time since the probe started, Hezbollah and Amal have mobilized armed militias and supporters to spark fear and pressure political institutions into removing Bitar.

It is unclear if the LF has been actively involved in the clashes, but the LF-Hezbollah’s rivalry seems to have poured into the Beirut blast investigation.

The violence that erupted at a boundary between Christian and Shiite neighborhoods added new concerns over the stability of the country. Amid such sectarian drift, the Lebanese people find themselves gripped between fear and the threat of further escalations amid an unprecedented economic crisis that is eroding the country’s social fabric. 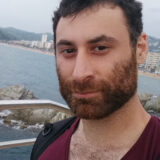