Lebanon at Crossroad: Brain Drain and Freefall of the National Currency

A new wave of emigration from Lebanon can have a brutal impact on the country. 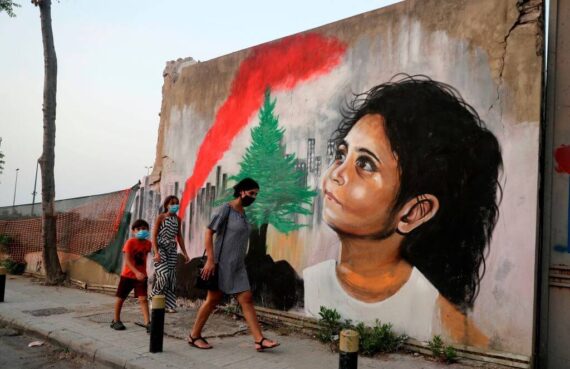 Mask-clad pedestrians walk past a mural painting on September 4, 2020, depicting a young Lebanese girl who suffered a face injury in the August 4 massive blast at the nearby seaport, one month after the disaster that left scores of people dead or injured and ravaged swaths of the capital Beirut. Photo by JOSEPH EID/AFP via Getty Images.

The United Nations Economic and Social Commission for Western Asia (ESCWA) has estimated that around 55% of Lebanon’s population is trapped in poverty. However, some economic experts think the country could still count on its human capital, meant as the set of knowledge, skills, and health that people invest in and accumulate throughout their lives.

Investments are central to human capital development because it delivers economic benefits in the long term. But as its outcomes are not always visible in the short period, governments may lead to underinvestment.

Lebanon is well known for its outstanding healthcare and education systems based on private initiatives. But in recent years, the country is suffering from a dangerous depletion of economic and human resources. As a consequence, Lebanese human capital is deteriorating.

The World Bank assessed that Lebanon’s human capital index placed the country with a score of 0.52, which is below the MENA average of 0.57.

Read: The Beirut Port Explosion: The Chernobyl of the Lebanese Sectarian System?

Even though Lebanon is in an acceptable range in terms of healthcare, on the education front the average Lebanese student completes just 10.15 years out of the required 14, compared to a MENA average of 11.5, and a world average of 11.2.

More than one year of economic and political crises and a deteriorating purchasing power because of the devaluation of the Lebanese lira against the US dollar have left Lebanese banks and private universities struggling to survive. As a consequence, it negatively impacted access to education and healthcare.

In the last months, the American University of Beirut (AUB) dismissed around 25% of its workforce.

In the last months, the American University of Beirut (AUB) dismissed around 25% of its workforce. AUB’s students took to the street protesting against the dollarization of their tuition, which made access to higher education much more expensive.

Furthermore, the Beirut port explosion on August 4, 2020, caused serious damages to neighboring hospitals, engulfing other medical centers to struggle with the COVID19 pandemic.

But the reasons behind the deterioration of human capital have not only economic roots. The phenomenon of brain drain mixes internal and external factors.T

The Beirut disaster is only the outcome of endemic problems accumulated over the years. Lebanon is in a condition of dangerous freefall. More than 30 years of deficit financing and debt accumulation have led to a collapse of the national currency, followed by uncontrolled inflation, virtual bankruptcy, and a contraction of an economy highly dependent on imports.

The popular uprising that erupted in 2019, also known locally as the October Revolution, is still ongoing. The political class seems to resist the calls for a change, and it clings to power. Its sectarian power-sharing system that ended the civil war in 1990, contributed to the exploitation of the economic system.

Sectarian affiliation branched out into every aspect of social, political, and economic life. Since the start of the 2019 protests, two governments have already resigned. A third one is still in the process of being formed, nearly seven months after the Beirut port explosion, without any results at the time of writing.

Governments have been unable to implement effective reforms to contain the crisis. The population found itself desperate and impoverished. Moreover, the overwhelming despair that exists is prompting many people to think about leaving the country.

The overwhelming despair is prompting many to think about leaving the country.

However, the political instability of the Middle East has also played an essential role in the depletion of the economic and human resources of the country. Although Lebanon is a small country, it represents the crossroads of political influence for many countries in the region.

The Syrian war contributed to exacerbating the Lebanese crisis eroding its human capital. Lebanon and Syria have historically been entangled in times of peace and war. But both countries are also tied economically, politically, and socially.

Hezbollah, the Lebanese armed political party with allegiances to Iran, has played an active role in the Syrian conflict as an ally of Syrian President Bashar al-Assad. It operated militarily all around the Syrian territory over the years, as it saw the potential loss of its Syrian ally as an existential threat for the axis of resistance against Israel, which includes Hezbollah, Iran, and Syria.

As a consequence of the involvement in the Syrian war, the U.S. has imposed sanctions on Syria and Hezbollah. Such sanctions had a high degree of impact on Lebanon’s human capital.

Sanctioning Syria means to hit part of the Lebanese economic growth, as it couldn’t benefit from the business outflows out of Syria after the outbreak of the Syrian war in 2011.

The U.S. Caesar Act, a law signed by former U.S. President Trump in 2019 that aims to sanction any government or entity that assists the Syrian regime, affects Lebanese companies trading with Syria. It will have a draining effect on Lebanese entities and individuals, due to the trade and business relations between the two countries. Sanctions hamper the economic growth and working opportunities in Lebanon, essential for the process of developing human capital.

But the Syrian war also affected Lebanese welfare. The influx of around 1.5 million Syrian refugees in Lebanon in recent years has strained the public education system, as most Syrian refugees rely on it.

But as a symptom of the economic crisis, Lebanese children repopulated public schools, already weak before the arrival of Syrian refugees. The new enrollments in public education are countertrend compared with past years, where demand for private schools soared as public schools were overcrowded.

Lebanon is also paying the consequences of the troubled relations between the U.S. and Iran. The connection between Lebanon and Iran through its proxy network Hezbollah led Lebanon to isolate itself amid a deepening economic crisis. But at the same time, the economic dependence on the U.S. through an extensive popular and unofficial dollarization put the country in further instability. Overall, Lebanon needs financial aid from foreign countries to cope with its economic crisis. But its ambiguity with Hezbollah and Iran raises concerns among Western countries and international institutions.

To understand the payload of brain drain in Lebanon, the embassies of Western countries in Lebanon received more than 380,000 immigration requests following the Beirut port explosion. Most Lebanese have strong connections worldwide because of Lebanese diaspora over the years. There are more Lebanese living abroad than in their homeland, according to the Lebanese Ministry of information. The current economic and financial crisis is increasing these numbers.

Lack of perspectives in the country left many people without any choices but to find solutions abroad. Lebanese have spendable knowledge and skills to use in other countries. Many emigrated to the Gulf countries or in Western countries, where salaries are higher and their expertise is valued.

This new wave of emigration can have a brutal impact on the country since it would be composed mostly of high graduates. Lebanon’s healthcare and education system will be hit if thousands of highly skilled people seek careers overseas, and Lebanon can lose its human capital.