Between the Privilege of Committing Crime and Political Freedoms: Parliamentary Immunities in Turkey

The AK Party has opted for a collective regulation to remove the immunities of not just the above HDP members but of about 130 lawmakers from all parties, whose dossiers are awaiting process at the Assembly. The AK Party’s motion for a temporary constitutional amendment is an attempt to find public satisfaction without narrowing the sphere of politics. 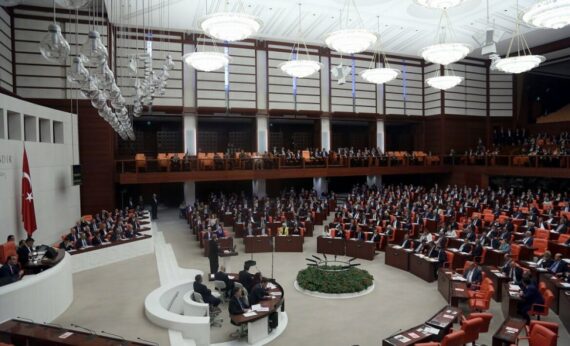 Parliamentary immunity has always been one of the critical topics of political and legal discussions in Turkey. Before the discussion of the matter and the ruling Justice and Development Party’s (AK Party) relevant proposal for the elimination of parliamentary immunities, it should be stressed that the issue is not about the parliamentary non-accountability but legislative immunity. The parliamentary non-accountability means that lawmakers cannot be held to account for opinions expressed or votes cast in the exercise of their official duties. The non-accountability provides an absolute protection to a member of the Turkish Grand National Assembly (hereafter Assembly) and such protection cannot be lifted by Parliament.

NewsBy Politics Today
On the other hand, legislative immunity aims to protect a deputy from arbitrary and unfounded inquiries. Article 83 of the Constitution of the Republic of Turkey provides that members of the Assembly shall not be liable for any criminal action unless the Assembly decides otherwise. The execution of a criminal sentence imposed on a parliamentary member either before or after his/her election shall be suspended until s/he ceases to be a member. This is the kind of immunity which was subjected to an amendment in Turkey today.

The kind of immunity that protects a legislator from criminal proceedings, as in Turkey, does not exist in Anglo-Saxon countries, such as the United States of America, the United Kingdom and Canada.

There are two root causes as to why the issue has always been revisited and discussed. One reason is that immunities are broadly protected by the Constitution against criminal proceedings; and the other is that legal requests for the removal of immunities are not brought to the agenda and not processed for further action at the Assembly.

The guarantee of immunity granted to the legislators in Turkey seems to have been more extensive compared to the Western democracies. The kind of immunity that protects a legislator from criminal proceedings, as in Turkey, does not exist in Anglo-Saxon countries, such as the United States of America, the United Kingdom and Canada. The immunity is applicable not in criminal actions but in private/civil law in these countries.

In several countries of Continental Europe, such as Germany, France, Italy, Spain and Denmark, legislators enjoy a similar parliamentary immunity to their counterparts in Turkey; and such immunity is applicable in criminal actions. Yet, the majority of the countries above have remarkably narrowed parliamentary immunities in conjunction with the consolidation of the principle of rule of law and of public trust in Judiciary.

A wide range of exemptions on immunities have been introduced. Legislators may be detained in flagrante delicto. In Turkey, however, the exemption is applied only if a lawmaker is caught in the act of committing a crime punishable by a heavy penalty. Besides, it is also seen, in general, that parliamentarians can be judged unless immunity protects one against any kind of criminal proceedings and unless measures that necessitate deprivation of liberty, such as arrest or custody, are applied.

There were even legislatures who carried weapons or PKK militants in their vehicles. An HDP parliamentary member paid a condolence visit to the family of the suicide bomber behind the Ankara attack that claimed 37 lives.

In short, the scope of immunity in European countries is narrower than that of Turkey. In addition to such an extensive guarantee of privilege the second point, that has led to flare ups on the issue, is the scarcity of files brought on the agenda and put in process against legislators, although in each legislative term hundreds are prepared with requests to suspend immunities of lawmakers in the Assembly.

This is in contradiction with the purpose of immunity which is to protect legislators against arrests, arbitrary and unfounded inquiries – particularly to those open to provocation of the Executive power. In fact the Legislative body itself is protected here, rather than legislators, and the reason for such protection is to ensure the proper operation of the legislative body.

Notwithstanding, hundreds of files with requests to revoke immunities of some legislators are not even on Parliament’s agenda and that leads to criticisms in the public domain that immunities go beyond the protection of legislative functions, and therefore of public interest, and provide deputies the “privilege of crime”. Based upon similar criticisms, amendments to narrow immunities were made twice (in 1999 and 2001), but rejected in Parliament.

In July 2015, the PKK terrorist organization resumed terror attacks and the Peoples’ Democratic Party (HDP) representatives at the Assembly organized events to effectively support the PKK, called for violence and issued statements in favor of terror. There were even legislatures who carried weapons or PKK militants in their vehicles. An HDP parliamentary member paid a condolence visit to the family of the suicide bomber behind the Ankara attack that claimed 37 lives. The visit, in particular, ignited public reaction. Due to this incident and similar others, hundreds of files prepared by prosecutors and courts were sent to Parliament. Public reactions and relevant dossiers against legislators have fueled debates again for lifting parliamentary immunities.

The AK Party submitted a motion to Parliament for a constitutional amendment. However, the proposal seeks a temporary clause on the pending immunity dossiers, not an amendment or the removing the Article 83. A temporary clause in the Constitution would allow revoking of immunities of lawmakers whose dossiers are already in Parliament so that they can be investigated and judged.

There are two reasons behind the AK Party’s motion for a temporary clause on the existing immunity files rather than an amendment to the Constitution. The first is that when the issue of immunity is revisited, the opposition asks for the removal of all immunities. In fact, the removal of the HDP lawmakers’ immunity is open to discussion; many, including HDP deputies, ask for lifting of all privileges not of the immunities of a certain party or a legislator. In addition, a particular criticism being voiced is that the AK Party legislators have plenty of immunity dossiers and they are benefitting from the current immunity from prosecution. With the AK Party’s motion, a solution is proposed to eliminate these criticisms and public reactions against the HDP deputies in Parliament.

The second is that examination of each and every immunity dossier would take months due to the procedures stipulated in the Parliamentary Bylaws. The AK Party wishes the elimination of immunities of all the lawmakers, not only those of HDP.

The AK Party has opted for a collective regulation to remove the immunities of not just the above HDP members but of about 130 lawmakers from all parties.

Nonetheless, applying the method stated in the Constitution and the Parliament Bylaws will keep the Assembly busy for a long time and not allow it to perform any other tasks. In fact, this is emphasized in the reasoning of the proposal and it is calculated that it will take eight months for the Parliament to process all files if the existing method is applied.

In addition to their concerns about possible reactions against those who may be incriminated, the Government and the AK Party seem sensitive to judicial procedures to which the legislators whose immunities are revoked may be subjected. It is considered that the public at large, electors, and supporters of such legislators will react against custody, arrest or ill-treatment of their representatives in question.

The negativities that occurred during the elimination of the Democracy Party (DEP) lawmakers’ immunities in 1994 are still lingering in memories. On the same page, several concerns are expressed that the removal of immunities granted to HDP legislators alone will cause similar reactions and an emotional break-up, narrow the sphere of politics, and create an excuse for violence.

Due to this reason, the AK Party has proposed the regulation for all of the immunity dossiers in the queue at the Assembly not only for those of the HDP. Besides, the statements released by the AK Party signal that the ruling party wishes to avoid the repetition of the outbursts in 1994 and aims for the legislators to stand trial without arrest.

The AK Party’s proposal will be discussed in Parliamentary Constitutional Commission in the coming weeks, and will be promptly transferred to the General Assembly. Since the AK Party suffers from the absence of a majority to pass this amendment, it sought the support of the opposition parties. Although the main opposition Republican People’s Party (CHP) and the Nationalist Movement Party (MHP) announced their support for the motion, some CHP deputies have said, since day one, that they will not back the proposal.

A full support is expected by MHP in the voting, but a substantial number of CHP deputies will say “no” to the proposal. Still, it is likely that Parliament will pass the proposal of the AK Party. The statements of HDP leaders reveal that they would resist the adjudications. Thus, the trials of HDP legislators who may lose their parliamentary immunities will pre-occupy the agenda in the upcoming months.

Turkey has been the target of intensive terror attacks recently. The Reconciliation Process ended with the PKK attacks. Hundreds of security forces along with some civilians have lost their lives during this period of the conflict. In the meantime, actions and statements by the HDP legislators have caused public uproar and reactions. The AK Party has opted for a collective regulation to remove the immunities of not just the above HDP members but of about 130 lawmakers from all parties, whose dossiers are awaiting process at the Assembly. The AK Party’s motion for a temporary constitutional amendment is an attempt to find public satisfaction without narrowing the sphere of politics.